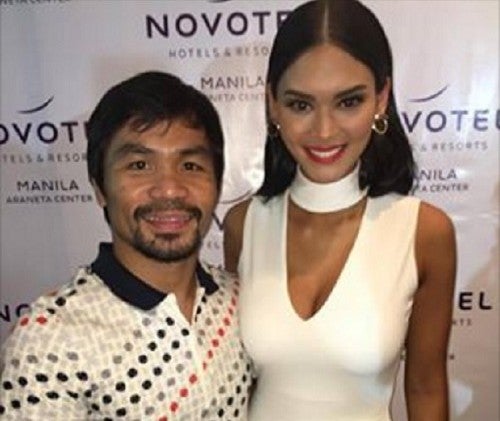 If she had her way, Pia Alonzo Wurtzbach would love to relinquish her Miss Universe title in the Philippines.

“We’d all love to have the Miss Universe pageant here in the Philippines,” Wurtzbach said in an intimate gathering with members of the media after her grand press conference at the Novotel Manila in Quezon City Thursday afternoon.

The New York-based beauty flew to the country on Wednesday morning for the 2016 Binibining Pilipinas pageant on Sunday evening, where she will crown her successor as Miss Universe-Philippines.

“I am actively campaigning for it to be held here. But I don’t know how far along we are in making it happen,” Wurtzbach said.

“The possibility is always there. But is it a done deal? I don’t know. I can’t give you an answer. But we do want the pageant to happen here,” she said.

The last time the country hosted the Miss Universe pageant was in 1994, when Sushmita Sen scored India’s first victory in the global competition.

Wurtzbach also flew to the country in March to witness the presentation of the official candidates to this year’s Binibining Pilipinas.

“There were a few who caught my eye, because they look like they were having fun,” she said. “That’s what I am looking for in a candidate, someone who I feel like I want to be friends with.”

“I noticed there were a lot of them who looked like me. Many were doing ‘my glance.’ But there’s nothing wrong with that,” said the queen from Cagayan de Oro City.

“A lot of the contestants are pretty, and they’re really competitive,” she said.

Wurtzbach confirmed that other countries have noted this, too.

“They’re watching us. My fellow Miss Universe contestants came up to me and said they only had a few contestants, and some of them were just hand-picked. But us Filipinos, we ‘fight to the death’ for a crown. We really take it seriously,” she said.

Wurtzbach said she has only seen this year’s batch of aspirants walk in swimsuits.

“I’m excited to see them in the question-and-answer round, because Miss Universe now holds two ‘Q and A’ rounds, and it might change because we already know the formula,” she said.