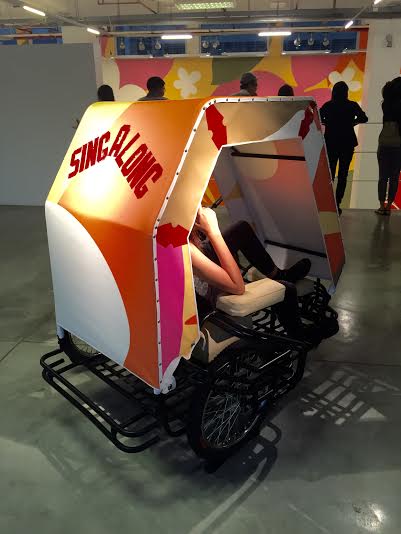 Taiwan-based artist Michael Lin uttered these words upon seeing a colorful pedicab whiz by as he stepped out of his hotel in Intramuros for the first time.

This was last year, and Lin, known for interpreting traditional textile design into public spaces, immediately thought the modified blue-collar bike would make the perfect canvas for the project he casually described as an “untitled gathering in Manila.”

The tarps’ abstract designs inspired by Taiwanese fabrics are done in vivid summer colors. It would be difficult to miss one and pedestrians in the area are always delightfully surprised when they chance upon one of Lin’s creations.

Thankfully, the curious need not conduct a stake-out outside the campuses to catch a glimpse.

Every day, one or two of the pedicabs visit CSB’s Museum of Contemporary Art and Design (MCAD) tucked on a corner on Dominga Street, a stone’s throw away from the three schools.

“I’m a bicycle rider. I first came [to Manila] twice last year to do research. The first day I walked out of my hotel, the first thing I saw was a pedicab. I thought, ‘Wow! Fantastic!’ There’s this mode of transportation that exists in the daily life here. So I got really excited about that,” he told Inquirer Lifestyle.

Lin is known by global fans for “creating monumental site-specific painted installations.” His “interventions,” as he calls them, “redesign and reconfigure public spaces” by “dynamically transforming the way they are perceived by the public.”

Past projects include a “re-envisioned” bookstore, tennis court, community hall and atrium.

Instead of limiting himself to a canvas, Lin would “activate public spaces with specific colors and ornamental patterns” while allowing a space or object to retain its original purpose.

In the case of the humble pedicab, the translation of traditional Taiwanese textile design onto the tarp makes the viewer/rider realize its huge potential for greater self-expression.

The tarp is no longer just a repository of the names of an owner’s family members, an announcement of the barangay where the pedicab parks at night, or a blank space to glue a political candidate’s campaign sticker on. Imagine the huge possibilities.

Cultural exchange was Lin’s big idea behind the tarp trade.

“They give me their tarps and I make new ones for them so that my work would go out in the community and their pedicabs would be in the museum,” he said.

As expected, a lot of pedicab drivers were excited to be included in the project. Budget constraints however, limited the selection, and only five pedicabs each from Barangay units 752, 733 and 703 were selected.

Also inside the CSB building is a battalion of wooden stools, about a foot high each, that when arranged in a specific sequence echo the design on the walls.

Lin said the stools were reminiscent of the ones popularly used in Taiwan in the 1960s and ’70s.

“A lot of families had these stools,” said Lin. “When they had outdoor cinema, everyone would bring their own stool. Even in roadside restaurants, you would have these stools. It was seating for everybody.”

Lin added the stools also stood for the idea behind his effort.

“When I say ‘untitled gathering,’ it just means informal, there is no goal, just a place where we can sit. That’s more of what it means,” he said.

“Michael Lin: Locomotion” runs until May 21 at the College of St. Benilde Museum of Contemporary Art and Design, Dominga St., Malate, Manila. Exhibition is sponsored by Pacific Paints Philippines Inc. with the support of Bellas Artes Projects.