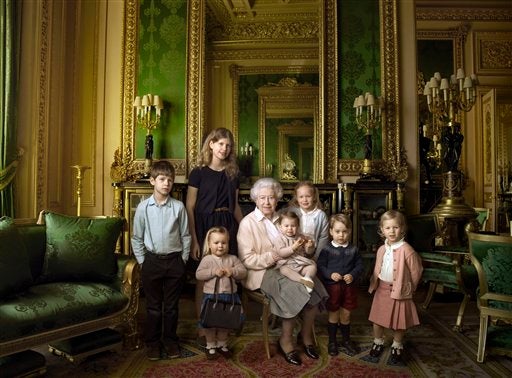 This official photograph, released by Buckingham Palace on Wednesday April 20, 2016, to mark her 90th birthday, shows Queen Elizabeth II with her five great-grandchildren and her two youngest grandchildren in the Green Drawing Room, part of Windsor Castle's semi-State apartments in Windsor England. The children are: James, Viscount Severn, 8-years-old, left, and Lady Louise, 12-years-old, second left, the children of The Earl and Countess of Wessex; Mia Tindall, holding The Queen's handbag, the two year-old-daughter of Zara and Mike Tindall; Savannah 5-years-old, third right, and Isla Phillips, 3-years-old, right, daughters of The Queen's eldest grandson Peter Phillips and his wife Autumn; Prince George, 2-years-old, second right, and in The Queen's arms and in the tradition of Royal portraiture, the youngest great-grandchild, Princess Charlotte, 11-months-old, children of Prince William and Kate Duchess of Cambridge. (© 2016 Annie Leibovitz via AP) MANDATORY CREDIT

One of the images, released Thursday by Buckingham Palace, shows the queen with two grandchildren and five great-grandchildren.

Another image shows the queen on the steps of Windsor Castle with four of her beloved dogs: corgis Willow and Holly and dorgis Vulcan and Candy.

A 2007 Leibovitz royal photo shoot caused a stir when a trailer for a BBC documentary suggested the queen had abruptly walked out. The BBC later said the footage had been misleadingly edited.