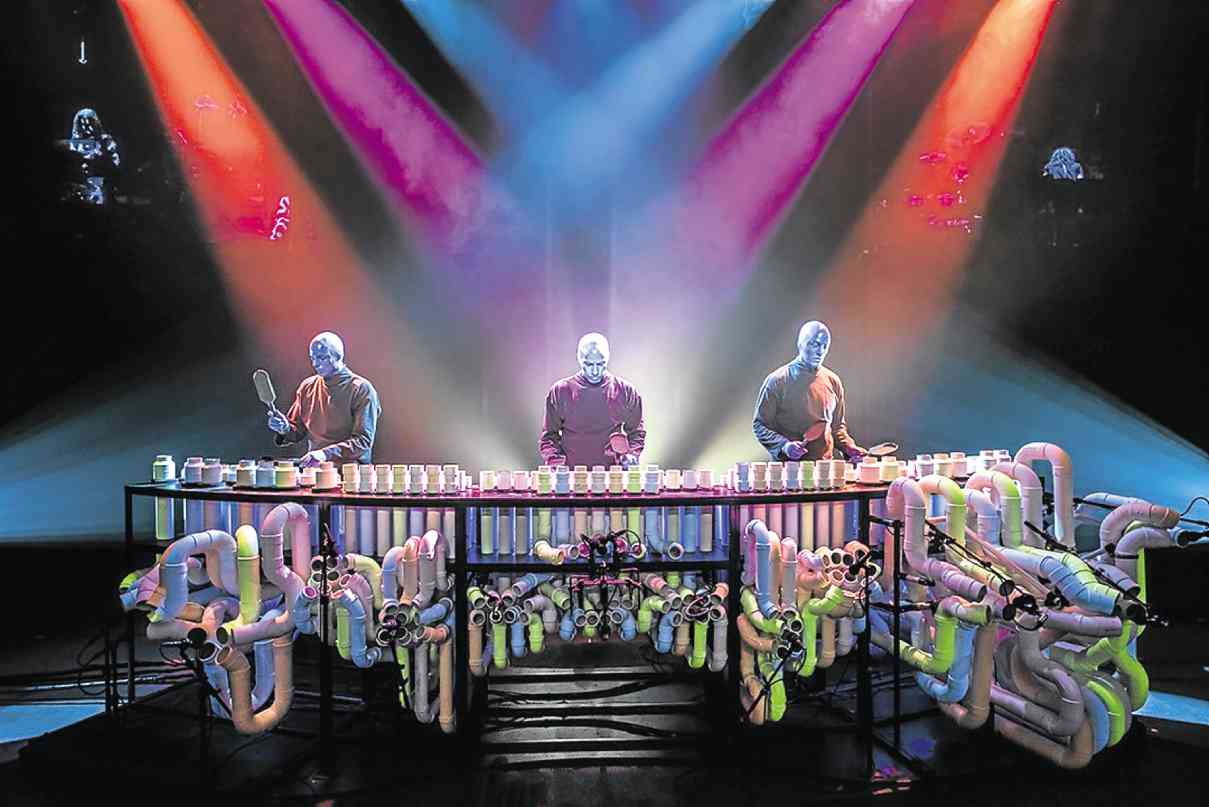 A playwright uses dialogue to create interaction among characters. A songwriter uses lyrics to convey the message of a song. A “blue man,” however, uses neither dialogue nor lyrics, but still leaves the audience awestruck and speechless.

The Blue Man Group proves that talking or singing are not always necessary to mount a successful stage production.

Its show is truly a visual and sonic extravaganza made possible through the creativity and combined efforts of actors, musicians, artists and a hardworking production team.

At the center of it all is a trio of literally blue men—their skin covered in sticky, custom-made blue paint.

Who are these blue men, and where did they come from? And why are they blue?

Apparently there was no particular reason for the blue thing in the beginning. Blue Man Group cofounder Phil Stanton says, “It was just kind of an intuitive choice. It just seemed right, beautiful—striking, but also kind of sublime. You could be serious or sublime, but it also works for comedy.”

He adds, “Blue is really sky and water. You can say that it represents sadness, but that’s not bad. It has the least equity, the least baggage or associations that come with it. It’s kind of silly, but it’s true.”

There is no way of knowing what universe the Blue Man Group comes from. And yet there is universality, and the audience understands and responds to what happens onstage.

The production combines live music, video, light and sound effects, comic timing and audience participation. Members of the audience are asked to take part in the skits, and the flow changes depending on how the participant chooses to move on stage.

Blue Man captain Merdian, who has been with the show for 12 years, talks about the group’s relationship with the audience: “I think, with the Blue Man character, there’s neutrality and a distance. But then, through the course of the  journey that we take the audience on, that distance gets shorter and shorter.

“As we do things, the audience is like, ‘I don’t know what they’re thinking, but I think I understand.’ The Blue Man is a citizen of the world. We’re not from a specific space and time. The Blue Man is an ‘everyman’ that anybody can connect with.”

The fun starts even before the house lights are turned off. A LED message board above the stage shows a series of cleverly written pre-performance reminders.

The real show starts with the sound of loud, insistent percussion and the mammoth silhouettes of the three Blue Men are projected on a video screen.

Unlike other theatrical performances, the music score for the Blue Man Group resists using fixed notes, chords or beats. While the score is based on a loose set list, what happens in between is never final.

“For the music, there are no written parts,” says resident music director Tony Aguirre. “There’s no sheet music. Most of the band members don’t read music, either.  Some do. But the way that we learn the show is kind of like old tradition. It’s passed on.”

The music is not recorded. Everything is performed live, but with a more complicated band setup that includes unconventional musical instruments.

Most of the instruments are inside two small rooms above the stage, at a safe distance from where the Blue Man Group performs, but close enough for the band members to see what happens in every act—in case the actors improvise and an additional unplanned drum roll is needed.

There are four band members, two of whom play drums.  One plays what appears to be a regular drum kit arranged a bit differently, while the other is in charge of a very complicated percussion rig. The drummers  bring the part tribal, part rock ‘n’ roll rhythmic beats to the show.

The rock ‘n’ roll vibe is more palpable in the music of the guitar players, one of whom is Aguirre. There’s a bass guitar that is barely used; surprisingly, an electric guitar is not part of the ensemble.

In its place are the following:  a chapman stick, an electric musical instrument which is essentially a flat stick with 10 strings that can play chords, melody lines, textures and even bass lines; and an electric zitar (a cross between a sitar and a guitar) played by Aguirre who says it’s capable of producing a variety of sounds, from mild to ambient to loud.

Aguirre admits to being a fan of rock music, and discloses that his Peruvian roots are partly responsible for his being a musician. Such influences resonate in his zitar playing, and in how the music pans out throughout the show.

The most remarkable among the musical instruments is the PVC pipe organ, designed by Blue Man Group’s production team, and inspired by Stanton’s early job at an industrial hardware store.

But unlike a typical organ that follows a set of consecutive notes in an octave, the PVC organ is played based on the sound a particular color represents—different colors spread in different spots in the layout, not in a straight line.

Learning to play a song on the PVC organ is more difficult, and can take several weeks. Once a song is learned, though, the unconventional arrangement adds a quirky brand of showmanship to the performance.

How the show evolves is influenced by what happens in the outside world. “We try to look at things around us. The next time some big technology that looks like it’s really going to change our lives comes around, we’ll be writing material about it,” says Stanton.

But he admits that the Blue Man Group tries to remain neutral on current events and politics, though it tackles human behavior.

“We feel that the Blue Man should be talking about things that are much deeper, and I don’t mean intellectual. We’re trying to get something that’s really about our DNA. That’s why the DNA image comes up in the show. It’s a way to remind people that what we’re really talking about is ourselves,” he explains.

From the audience’s point of view, staging the show may look difficult. The secret is in this group’s vision and teamwork.

“We always think about how things will look on stage, how it will be lit,” says Stanton. “It’s in the very inception of things—Does it have a visual element? Does it have a sonic element?”

He adds: “We have a great team of people who create videos and other stuff. It’s a big collaboration. Nobody uses the word ‘I.’ There’s a lot of ‘we.’”

Despite the group’s evolution, Stanton believes that one thing has remained constant through the years.

“Fundamentally, the Blue Man is a celebration of creativity. It’s a priori, to use a term from my Philosophy 101 days. You don’t have to pattern it from experience to understand it. It’s not really symbolizing anything, it’s just a simple creative moment. I think we’ll always find new ways to express that.”

The Blue Man Group is brought to Manila by Blue Man Productions Ltd., Lunchbox Theatrical Productions Ltd and Concertus Manila. Shows will run  Sept. 14-25 at The Theatre at Solaire. Log on to www.ticket