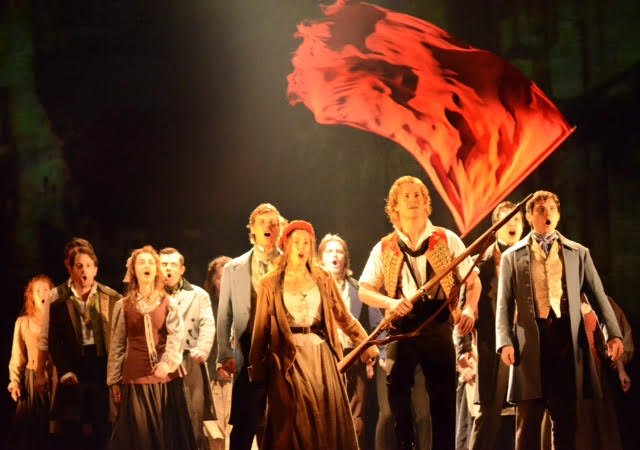 “LES Misérables,” the award-winning musical, has arguably become the quintessential musical theater against which other West End and Broadway musicals would have to be measured.

The 25th anniversary international touring production is running at Solaire until May 1, so here are five reasons why you should go see it, paraphrasing one of its famous songs, “one night more.”

The most immediate reason is Philippine pride: London-based Filipino entertainer Rachelle Ann Go is playing Fantine, and she’s particularly moving when she sings in her character’s dying moments, consoled by the promise of the bread thief, Jean Valjean, that he will raise Fantine’s young daughter Cosette as his own.

It all started when Schönberg saw a movie of Filipino director Lino Brocka that “had beautiful singers who were singing in Spanish, Italian, and speaking in American.”

When Schönberg came for the Manila auditions of “Miss Saigon” in 1988, Lea Salonga sang “On My Own,” and that was when he realized that “Les Misérables” was already popular.

Cosette herself is played by Philippine-Australian Chloe de los Santos, and in the singing ensemble are many Filipinos who obviously reaffirm Filipinos’ innate musical abilities.

Cameron Blakely and Helen Walsh, who play the Thénardier couple, said as much.

“So many people here in Manila are beautiful singers,” Blakely said.

Of course, the story itself, set against the backdrop of 19th-century revolutionary France, should find parallels with Filipino historic experience, especially of the 1986 Edsa People Power Revolt.

That revolutionary spirit may need rekindling as of the moment when Ferdinand “Bongbong” Marcos Jr., the son of ousted dictator Ferdinand Marcos, is leading the vice-presidential race and in a position to bring back to the nation the dark legacy of his father and family.

“I think as a piece of theater, you have many wonderful and incredibly strong characters that everybody in some way, shape or form can identify with,” said Earl Carpenter, who plays the stone-hearted man of the law Javert. “There are so many emotional stories that we’ve all probably at some point in our lives had to deal with. I think that’s the complex side of the story.”

And though he plays opposite Carpenter’s character, Simon Gleeson agreed.

“It hits something at the heart of being human,” said Gleeson, who won a Helpmann Award for his role as Valjean. “It’s a story of redemption and ultimately about hope and I think that audiences across the world recognize that we’re all fallible and we’re all striving to be better.”

Many Filipinos have seen the movie but not the production. But nothing beats live theater.

“There’s something to be said about the communal experience sitting in an audience and seeing people open themselves up; it’s just very powerful,” Gleeson said. “It’s not the same as seeing it on film.”

It seems that while Filipinos identify “Les Mis” either as theater or movie, most of them forget (or do not know at all!) it was originally a novel by the great French writer Victor Hugo, one of the most universally acclaimed writers.

Watching should spur you to reading, so, after Solaire, go to the library or bookstore and read the novel.