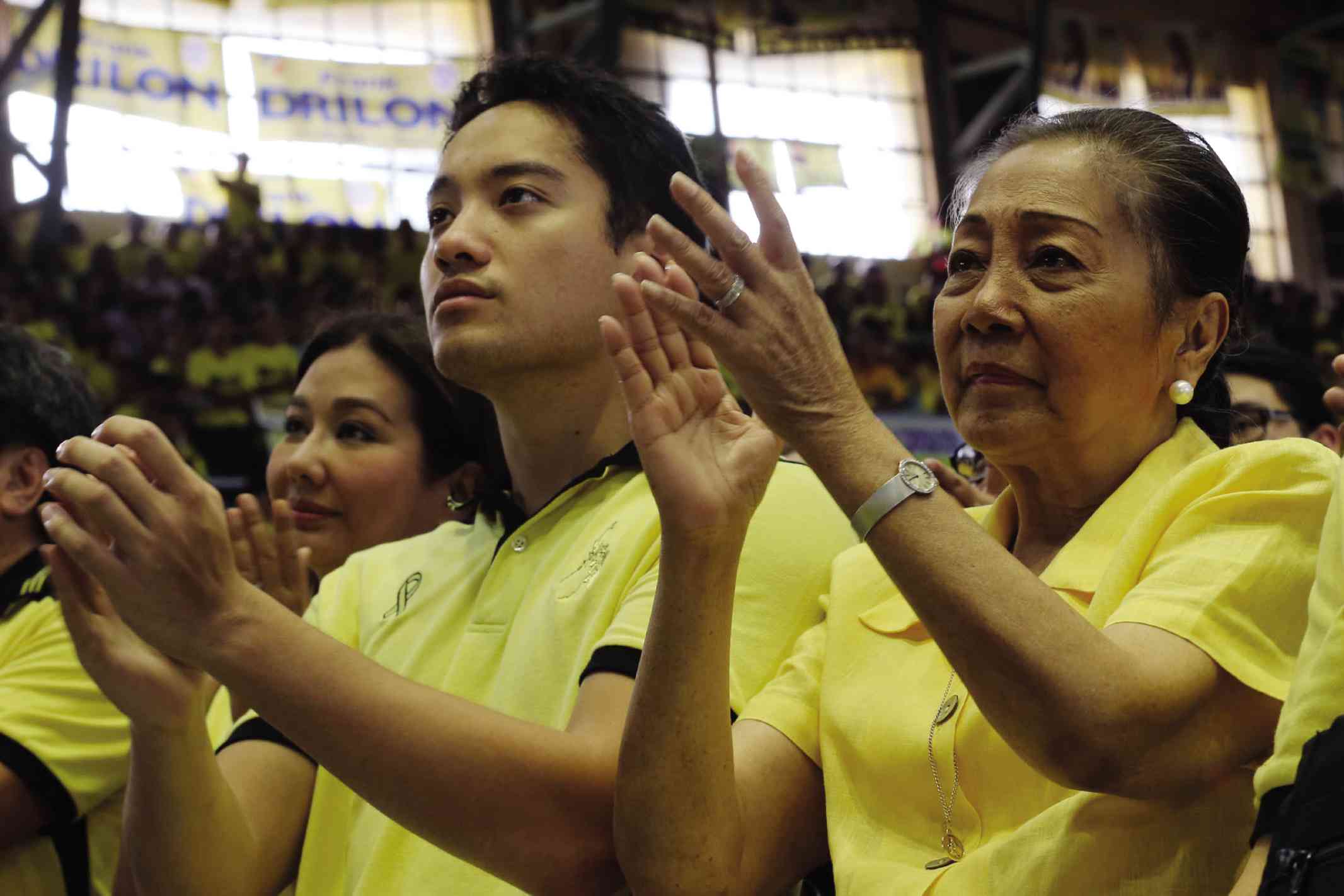 PAOLO Gerardo Roxas had set the alarm clock so he could meet his father that day at the golf driving range. Still, he overslept by 45 minutes.

When Paolo got there, Mar was already pounding balls, and very quiet. Suddenly, with unmistakable sharpness, the words tumbled out: “Paolo, you do not waste people’s time.”

Any agreement to meet someone at a certain time should be honored, Mar added; being late was “disrespectful” and “unacceptable.”

The anecdote reveals Mar as a stickler for propriety. Thus, the younger Roxas learned to always make effort to be punctual. When he is inevitably late for an appointment, he remembers that day.

“I could hear the menace in his voice,” he said in a recent phone interview.

Since January, the 22-year-old scion has been on the campaign trail, spreading the word on Mar’s platform and the family-treasured value of integrity.

(He was born Sept. 9, 1993. His mother, former beauty queen Maricar Zaldarriaga, is a semi-retired interior designer.)

Paolo finished his secondary education at the British School Manila and took a gap year. While most teens would take it easy, Roxas worked in a social development non-governmental organization, Kasagana-Ka, as a microfinance loans officer.

Assigned to Montalban, Rizal, he attended three meetings a day, usually with housewives engaged in such livelihood ventures as sari-sari stores and livestock.

“They took risks, making investments with their loans,” he recalled. “They learned accounting and reported on their progress [during the meetings]. I learned from them. We accomplished things together. I found that worthwhile.”

He moved on, as a tutor in English, to Messy Bessy, a social enterprise where at-risk youths worked while enrolled in the Alternative Learning System, an informal instructional program under the Department of Education. Here, he said, he learned about perseverance from those who managed to not drop out.

After that fruitful year, Paolo enrolled in Economics at Yale University in Connecticut.

“I always liked Economics, even in high school. It presents an excellent view of the world,” he explained. “I was fascinated by how price interacted with demand and produced revenue.”

One summer, Mar, who didn’t normally interfere with his son’s choices in education, prevailed upon him to take up Mandarin, predicted at the time to be the dominant global language of the future. Paolo quoted his father as saying, “Go! No questions asked.”

At the Harvard-Beijing Academy, students made a pledge to speak only Mandarin for the entire nine-week intensive.

“That was difficult at first but, as I began to understand the language, I also began to like it. I’ve taken up Mandarin at Yale every semester and one summer since,” said Paolo.

Last year, however, he spent his summer at the London School of Economics.

Now on his third year at Yale, Roxas is taking a break to support his father’s bid for the presidency. He made his first appearance at the Balay HQ, the campaign headquarters at the Araneta compound in Cubao. He quickly got over his nervousness and delivered a speech “reminding everyone there about what we’re fighting for.”

He has since gone around the national capital region and the surrounding areas, “delivering a message of continuity and change and reconciling people’s experiences with what the government is doing and will continue to do [if my father wins].”

In our phone interview, Paolo discussed the country’s economic progress and infrastructure growth in the past six years. Well-versed in current issues, he evaluated the traffic problem [based on statistics], the entire transportation system, and his father’s concrete plans to improve the situation.

He mentioned what the citizenry should do to finally have a meritocracy—a government whose officials are chosen for their skills, experience and education.

These days, Paolo’s routine begins at 6 a.m. He joins his father in a morning jog with Presidential Spokesperson Edwin Lacierda. The workout is an interval program of brisk walking and jogging, interspersed with lunges, squats and jumping jacks. Once warmed up, they run for a longer stretch—all these done to music from Mar’s portable speakers.

“We all get lost in the music while jogging,” said Paolo. “My dad doesn’t like to talk during relaxation time. He talks about work only when he’s at work.”

The younger Roxas likes the intimacy of smaller groups. He also enjoys public market runs, when he gets to meet vendors one-on-one. When his father was trade secretary, Mar was given the moniker “Mr.  Palengke,” as it was his custom to go around the markets to monitor prices of basic goods and befriend the vendors.

“My father is essentially an economist,” said Paolo. “The health of the market is linked to that of the society at large. It’s important to visit the markets and feel that pulse.”

During barangay visits, Paolo also does house-to-house calls. He is always moved by the residents’ eager anticipation when his group arrives and by their unconditional hospitality.

“Wherever we go, people go out of their way to welcome us,” he said. The party eats whatever the host offers. “There has been a lot of lechon.”

Asked what he noted was the most common concern brought before his father, Paolo replied, “Work and compensation.” At which point, he added that Mar has a solid platform to generate employment, and referred to the business process outsourcing (BPO) industry as one of his father’s initiatives.

Mar, then trade secretary, met business leaders to facilitate foreign investment and promoted the country as a potential BPO hub. Today, the Philippines is the call center capital of the world, with a target of 1.3 billion jobs for 2016.

Their most challenging sortie to date, by Paolo’s estimation, was the one in Sta. Rosa, Laguna. Mar had to speak before 2,000 people, and President Aquino was with the team. Paolo revealed that his father gets nervous about giving a speech when the President was on the same stage.

“He looks up to the President like a mentor,” Paolo said, adding that, in turn, vice presidential candidate Leni Robredo gets nervous with Mar around.

Sometimes Mar, his wife Korina, and Paolo are assigned different places for the day. “We arrive late at night, coming from… all over, wearing the same shirt.” That constitutes family time, catching up, chatting about anything but politics. “He just talks about golf,” Paolo said, “and asks about my day.”

Before going to sleep, Paolo would rather read than watch TV. These days it’s the vintage philosophical science fiction “Star Maker,” by British author William Olaf Stapledon. The book tackles such profound subjects as creation, the Creator and the cosmic mind, through the eyes of “a guy who falls asleep, wakes up in space and explores the universe as a disembodied spirit.”

Only a few hours later waits another frenzied day, which Paolo considers a fortune: “I enjoy every single time I go out there. How many people get the opportunity to travel daily, see various parts of the country and meet different people? I have learned so much!”