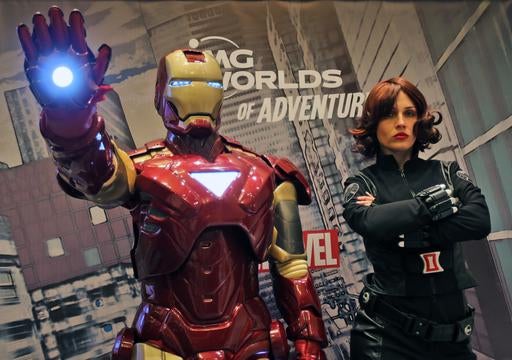 Marvel heroes, Iron Man and Black Widow pose at the IMG Worlds of Adventure press conference in Dubai, United Arab Emirates, Sunday, April 24, 2016. Dubai will soon have a one-stop destination for families whose tastes run from Spider-Man to velociraptors to the Powerpuff Girls. Local developer Ilyas and Mustafa Galadari Group said Sunday that a new 1.5 million square-foot (139,355 square meter) indoor amusement park it is building on the city's desert outskirts will open on August 15. AP

DUBAI, United Arab Emirates — Dubai will soon have a one-stop destination for families whose tastes run from Spider-Man to velociraptors to the Powerpuff Girls.

The $1 billion IMG Worlds of Adventure park includes one section centered on Marvel Comics and another branded by Cartoon Network. Another zone is dedicated to dinosaurs and features a roller coaster to whisk thrill-seekers outside and back into the air-conditioned complex.

Dubai is increasingly looking to amusement parks to cement its standing as a tourist haven. Another company is building a massive complex elsewhere in the 2020 World Expo host city that will include Legoland and Six Flags parks.