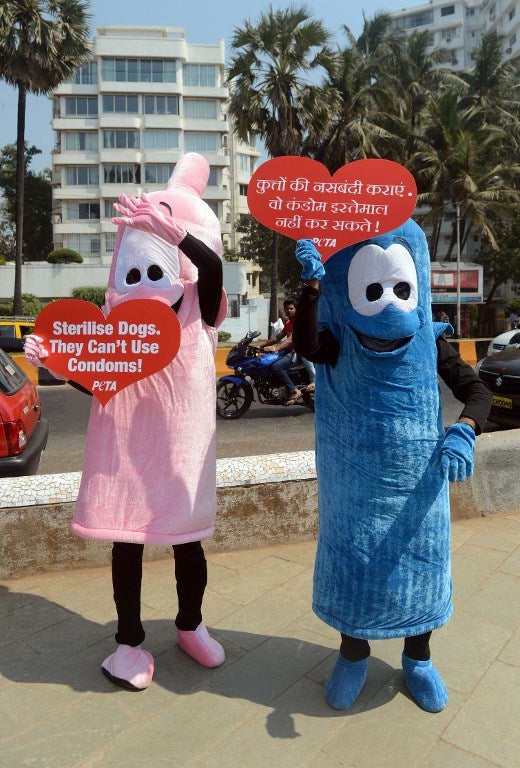 In this AFP file photo, members of People for the Ethical Treatment of Animals (Peta) India dressed as giant condoms hold signs reading "Sterilize Dogs – They Can't Use Condoms!" during an awareness campaign in Mumbai on February 19, 2013. On Wednesday, one of India's most senior lawyers has been ordered to study condom and other contraceptive packets to determine if their pictures are too racy and should be banned.

One of India’s most senior lawyers has been ordered to study condom and other contraceptive packets to determine if their pictures are too racy and should be banned, according to reports Wednesday.

“Do you have any plan to regulate such advertisements?” a Supreme Court bench was quoted by the Indian Express asking Singh, the government’s third-ranked legal officer.

“You also have to tell us if such advertisements may constitute a penal offence,” the newspaper reported the bench as saying.

Singh’s office confirmed to AFP that the court issued the order on Tuesday, but declined to comment further.

Conservatives in deeply religious India often register complaints with police under the obscenity law, which carries a maximum punishment of two years in jail and five years for repeat offenders.

Police are obliged to register a case when complaints are made.

The latest case came after condom manufacturers appealed against an earlier High Court order banning lurid pictures from their packets on the grounds that they were obscene and an affront to Indian culture.

The High Court was responding to a petition filed against the manufacturers.