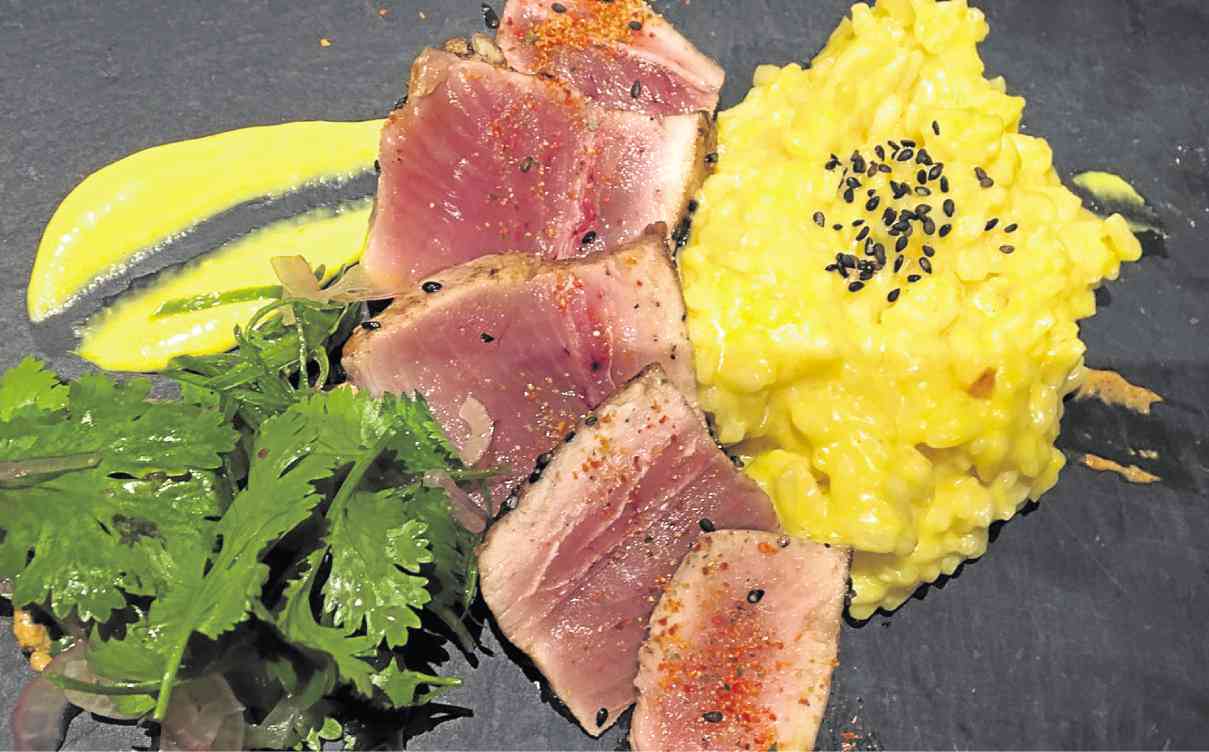 SEARED Tuna with Risotto and, below, “causa”-inspired appetizers

Perfect place to discuss politics–the blend of flavors is inspired

There’s an uncle of mine whose specialty is, as children put it, cooking with one finger. He buys cookery books by the dozen, and when he finds a recipe he wants to try, a weekend afternoon would be dedicated to following the recipe down to the last detail.

“Three hundred grams chopped onions,” he would announce to the kitchen staff. “Inday! Chop two onions. No, maybe three. What else, let’s see…”

Soon the kitchen would be buzzing with the clacking of knives on chopping boards, the soft thud of pestle against mortar, and the sizzle of onions caramelizing.

However, there was no moment he himself wielded a knife or got near a stove, and if it all went south, he had an army of underlings to blame.

But usually all went well, and he would preen and bask in the family’s compliments as if he himself had invented the recipe.

I never reached this level of detachment from the food, but it was always a relief to have someone who could do all the stuff I didn’t want to do.

Our latest cook left last month, taking with her many hours of lessons on how to sous vide, to pressure-cook lentils in preparation for making a dal, and to keep my batterie de cuisine of copper pots gleaming.

I’ve always enjoyed the chef’s role of putting together the ingredients or tossing with a hot wok, not so much the peeling, the chopping, and definitely not the cleaning up.

After a long day at work, sometimes the last thing you want to do is face the banality of cooking dinner. I made roast chicken this evening and it was pretty awful—not so terrible as to throw it on the wall, unfortunately, just bad enough so that the whole family just munched silently over the carcass and then wandered off.

It’s around this point that my wife suggests we just all go to the mall and eat at Chili’s, which is every home cook’s safe haven. The food, it just appears! The children will eat without having to resort to violence!

I mention this because it just goes to show the food that we expect to be served in a restaurant these days is far away from the daily act of eating for nourishment.

Nourishment and beyond nourishment—the two are so distinct in my mind that, before I go to a degustacion dinner, I make sure to eat at about 5 p.m. two pieces of KFC chicken, with rice and gravy. That way, if the chef serves me a starter that consists of a sphere that disappears into nothing, to “play with the concept of what is food,” then I won’t punch him in the face. I can be nice to waiters, make small talk, and be comfortable with the idea that the main course will appear at around 10 p.m.

Last night, I went to Nikkei with some friends to discuss politics over food and alcohol, and this restaurant is perfect for that.

If you have a sandwich or a small meal an hour or two beforehand, you will be in the perfect state to appreciate the small plates of Japanese-Peruvian food you order, like tapas or pintxos, until you’re ready for the main course, which is a slightly bigger dish that rounds the meal off nicely and puts a lid on it.

Of the numerous Peruvian places that have popped up in the metropolis recently, Nikkei, talk has it, is the most upscale and innovative (read: inauthentic) but also the most presentable.

This is not food for people in a hurry; this is food made for conversation.

We started off with tiraditos and ceviches (broadly, the latter are marinated while the former aren’t), causa appetizers (in Peruvian cuisine, a causa is main course of mashed potatoes layered with a filling, like a kind of cold shepherd’s pie) that were tiny bits of mayonnaise-laden minced fish balanced atop a thimble of mashed potatoes, and a continuous arrival of various scrumptious nigiri and sushi rolls I would be hard-pressed to name.

We were surprisingly full by the time we got to the three main courses: grilled kurobuta pork with coleslaw; lomo saltado with fried potato chips and a molten egg; and seared tuna with very rich risotto.

Everything was excellent, especially the main courses; the combinations of flavors were unexpected but inspired.

The small plates were all good in themselves, but at a certain point, it became clear that they were variations on a theme: good fish, fresh, clean flavors, paired with something spicy, something rich, something mushy, all served on an Instagram-friendly slate plate with a smear of creamy sauce.

If I were to return, which I definitely will, I would have fewer appetizers, have one main course per person (the waiters claim one order is good for sharing, but it’s really not), and save room for the unexpectedly large and generous dessert of tres leches cake, which is fantastically good in a way that could kill you.

You can’t eat like this every day; the little pockets of rich mayonnaise and cream do add up, as does the bill. But this is what the best of restaurant dining is like: casual, relaxing, continuously novel.

It would be on my shortlist of places to meet at, if only it accepted reservations.

Meanwhile, my battle in the home kitchen continues. Get home by six, kids in bed by eight? There’s the real challenge.