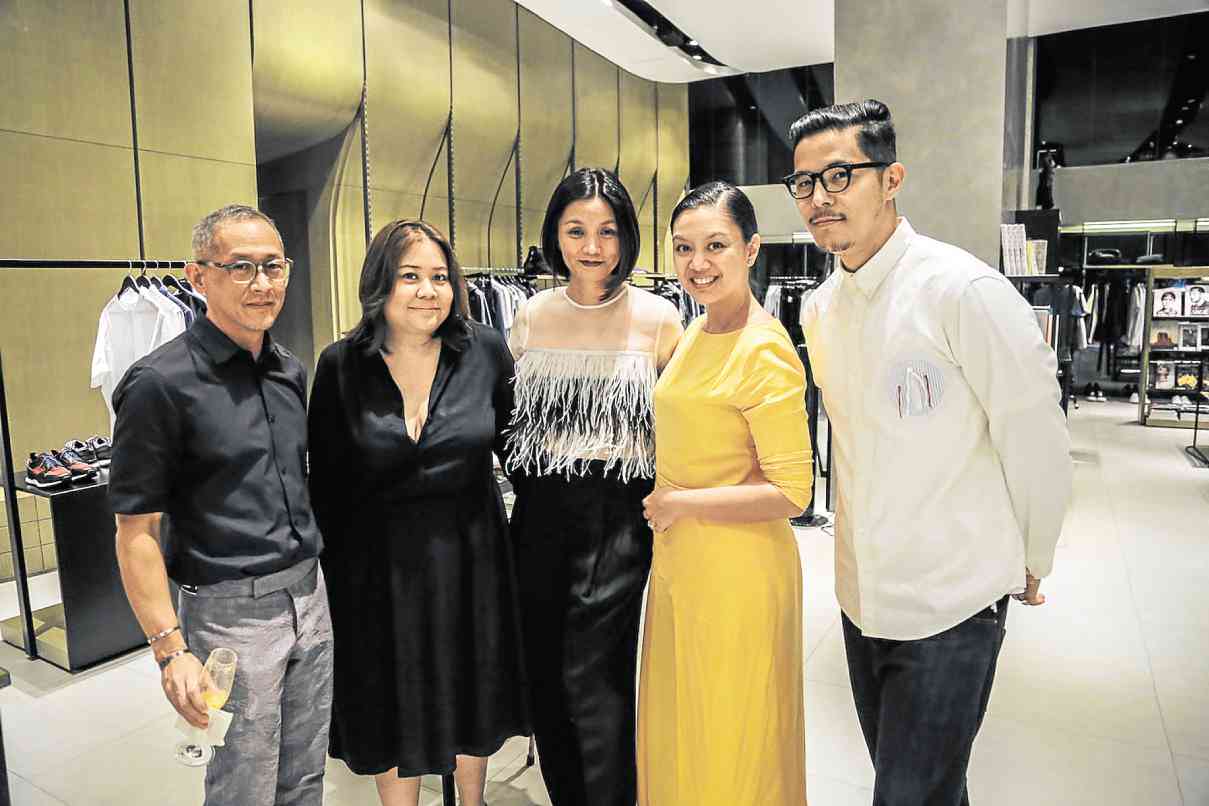 Dining amid Sacai and Giambattista Valli

It’s a fantasy for many. To be left unchecked in some designer store, after the doors are locked, to roam the aisles, try on the goods and slyly admire yourself in the mirror.

Late last week, Univers closed its doors early and set up dinner inside its plush confines. A long table defined the middle corridor, one side leaching ambient light across the glass panels, with a profusion of white flowers dotting the center of the dining area.

Walking through the store, empty of shoppers and sales staff, made for a charming, surreal experience. It was like a candy store left untended. I was tempted to pluck out and sample some of the decadent treats. And by sample, I mean discard my current dress and force myself into one of the new ensembles from Sacai.

Racks of Giamba, the pret-a-porter line of Giambattista Valli, offered a youthful juxtaposition to Sacai’s unique medley of prints, while a table filled with Robert Clergerie footwear required extensive perusal. A pair of raffia platforms seemed precisely apt for the summer, but it was the multihued and patterned slides that really called out to me. I wanted to fit the pair before we were called to be seated, making a quick attempt to judge the health of my bank account as I slid into my chair.

Guests dined on local organic fare, crafted by Gaita Forés, beginning with her version of duck a l’orange using fowl from Batangas, followed by a light fresh corn pappardelle with crab guinataan and a coconut panna cotta. A deconstructed sinigang, consisting of Bohol white marlin with a miso glaze, made up the third course, while a grilled beef tenderloin medallion on a bed of blue adlai and sigarillas finished the savory course.

“This event isn’t just about the food,” Univers’ Jappy Gonzales announced near the end of the dinner. To mark the multilabel luxury retailer’s fifth year, Univers was holding a miniraffle that evening to mark the beginning of its raffle promo.

With P50,000 worth of merchandise on the line, each of the guests was given one raffle entry. Gonzales picked out an entry with a flourish, walked over to former Preview EIC Pauline Juan and said, “Congratulations!”

Those not invited to the dinner can still vie for the ultimate grand prize: P150,000 each in  shopping credits will go to two winners. Every single receipt purchase at Univers will earn shoppers one raffle ticket. Unless you’re a VIP client, then you get two tickets for every P5,000. The raffle ends on July 30. The winner will be announced on July 31.

Jo Ann and I will probably be there, chanting incantations, murmuring pleas to any listening spirits, in  hopes that, maybe this time, we’ll be the lucky ones.