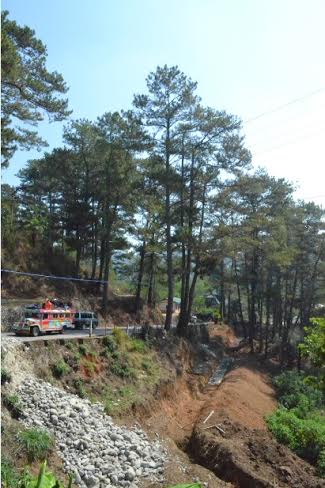 DESPITE opposition from local heritage advocates, the Department of Public Works and Highways (DPWH) pushed through with its controversial road-widening project in Sagada, Mountain Province.

The Inquirer first reported the issue last January after conservationists cried foul over the project, which would affect a number of age-old pine and alnus trees and the American-era mission compound of the Episcopalian church.

Sagada resident Celia Peñaflor of the Agowan local heritage group told the Inquirer   the DPWH did not have a permit yet to cut trees from the Department of Environment and Natural Resources (DENR), but would push through with the project.

The DPWH also does not have the free prior and informed consent (FPIC) from the local indigenous people’s group, she added.

Peñaflor said that as a result of the second assembly on March 18 between the DPWH and the opposing groups—Episcopal Church Women (ECW), Saint Mary the Virgin Church Vestry and other concerned citizens—there was an agreement to put all activities on hold until the requirements were met.

However, the activities continued after the agreement was made although these are “on hold” after ECW intervened.

She said the project would not really address the traffic concerns of Sagada.

The Philippine Speleological Society recently held its 16th National Cave Congress in Sagada with the theme “Kweba-Kultura-Kalikasan (Cave-Culture-Environment),” the first time it included the cultural aspect of caves on its yearly event.