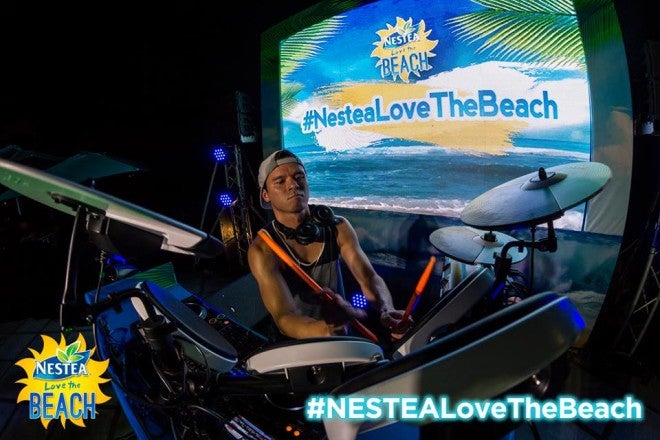 The fist-pumping crowd seemed to be trying to remember who this familiar face is, yes, he must be an actor, except now he’s giving them a whole lot of fun as a DJ.

He goes by the name DJ Tom Taus, but the audience also knows him as lead actor in the film “Batang Z,” or the bunso from the heart-wrenching “Lahar,” and, of course, “Cedie: Ang Munting Prinsipe.”

People cried over Taus’ film interpretation of Cedie Elroy (“Little Lord Fauntleroy”) who was raised in New York as an ordinary kid and, after his dad’s death, learned about his royal connection.

Exactly 20 years later, Taus has morphed into a musician—his talent showcased at The Lind Boracay, where iced tea brand Nestea hosted a party last April 28, which also happened to be Taus’ birthday.

The crowd was impressed by his percussion-playing. “I think that’s how people recognize me now, kasi I’m the only one who’s pretty much doing it,” he told Super. “I DJ and I do the percussions myself.”

How exactly did he transition from actor to musician?

In 2001, five years after “Cedie,” Taus moved to the United States. He was then 13. It was supposed to be a vacation, to see how things were between her sister Antoinette and his American father Thomas Sr.

But he stayed longer. “I tried something different, life as an ordinary kid in America.”

The drumming skills that earned him a new set of fans in Manila were first developed when he was in Grade 7 in the US. His first encounter with DJs was at house parties, only vaguely understanding how that kind of life worked. He soon made friends with DJs and promoters.

As an 18-year-old, vacationing in the Philippines in 2006, he finally decided he wanted to make a living from spinning.

He wasn’t—and claims he still isn’t—a party animal, but imagined himself as DJ Jon Herrera, who was, at that time, doing gigs at Embassy in Bonifacio Global City.

“It must be amazing to be up there, spinning good music, people rocking out with you,” Taus recalled.

Some eight months after deciding to move to Los Angeles and practicing daily, he began to make money as a DJ. He was purely self-taught and asked friends for pointers. Soon he made a name for himself in the LA scene.

He didn’t want his newfound passion to be a secret, so he went all-out and “took the plunge.”

He returned to the Philippines in 2014 to join his sister in a show that would document their homecoming in Angeles City, Pampanga.

From there Taus has gone to many provinces around the country and has gigs every weekend.

“Here, there’s a party everywhere… there’s always an occasion to have a party, a gathering,” he said. “I wasn’t expecting it.”

Taus said that “in some places EDM is a new thing… I think it’s also cool that some of these provinces have never heard this kind of music, and I’m the one who’s introducing it to them. It’s a different type of satisfaction.”

He noted that he’s upbeat and is setting his sights on Asia. “I feel like the Asian market is booming not only in music but in everything else, so I think it’s a great time to be here in this part of the world.”

He played at Ultra Japan last year and is set to perform at Ultra Korea in June, so his pivot is paying off.

His ultimate goal is to spin in Ibiza because “if you spin there, you’ve made it.”

He said he feels he’s got many more years to give the audience a good time, if he’s fortunate enough to be “a DJ forever.”

He also revealed that he’s no longer interested in being an actor: “I’m done with it.”

When he moved back to Manila, he was flattered to know that everywhere he went, people remembered him as Cedie. But somehow he knew that acting would take a back seat.

But at the same time he’s not expecting a whole generation, along with their moms and dads, to see him move on from the undying archetype of a congenial boy, Camille Prats’ Princess Sarah being the girl version.

“Some are not gonna move on forever, and that’s OK,” he said.

“Yung goal ko lang naman talaga is to introduce who I am now to people… I do different things now, but everything is OK, I’m always a sweet boy,” he assured fans of Cedie.