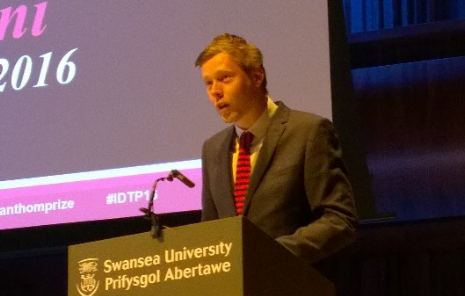 Grief is the Thing with Feathers’ takes Dylan Thomas Prize

LONDON — Writer Max Porter has won the Dylan Thomas Prize for young literary talents with his poetic look at loss, “Grief is the Thing With Feathers.”

Named for the late Welsh poet, the prize is open to fiction by English-language writers aged 39 or under. Thomas — author of rambunctious, lyrical works including “Under Milk Wood” — was 39 when he died in 1953.

The winning book, Porter’s debut, is a work of poetic fiction inspired partly by the poems of Ted Hughes and partly by the death of Porter’s father when he was a child. It focuses on two young boys devastated by the death of their mother, and their family’s journey to healing with the help of Crow, a mysterious trickster figure.

Cultural historian Dai Smith, who chaired the judging panel, said the book “transforms the ordinary through an extraordinary feat of imaginative prose.” TVJ