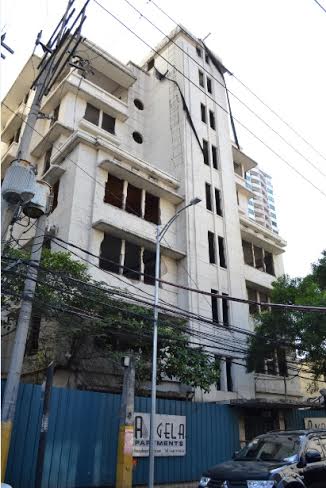 Will prewar Angela Apartments be demolished like Admiral Hotel?

HERITAGE advocates have raised concern over the prewar Art Deco Angela Apartments on MH del Pilar in Manila’s Malate district, following reports it would be demolished just like its neighbors—Admiral Hotel and Michel Apartments—and other heritage structures in the city in recent years.

A source told the Inquirer the property is now up for sale after its owner, Malate Art Deco Realty Inc., which initially planned to rehabilitate the heritage building, decided to sell it due to financial losses.

The building was built in 1936, therefore, over 50 years old and a presumed Important Cultural Property (ICP) under the National Heritage Law of 2009. Described as a Streamline Moderne type of Art Deco, it was designed by Fernando Ocampo, who also did Admiral Hotel.

Ocampo was also the architect of Manila Cathedral (rebuilt after the war) and the University of Santo Tomas (UST) Central Seminary, declared a National Cultural Treasure by the National Museum in 2010.

Ocampo, one of the founders of the UST School of Architecture and Fine Arts, established in 1930, is considered a pioneer of Philippine modern architecture.

In a statement to the Inquirer, the Heritage Conservation Society (HCS) is calling for the preservation of the building because it is an ICP.

“We need to protect it and preserve it for future generations of Filipinos,” HCS says.

It also appeals to Manila City Hall to coordinate with the National Commission for Culture and the Arts and obtain the list of ICPs in the city before any demolition permit is issued.

“Angela Apartments is one of those [heritage] buildings, especially since it was designed by renowned architect Fernando Ocampo,” HCS adds.

Villalon said the seven-story residential building with a nine-story central tower was built to last because of the best materials used in its construction.

Ocampo reportedly also made sure the building adapted to the tropical climate of the Philippines as evidenced by the horizontal bands of concrete that served as shades for the windows.

Each apartment unit has three windows and three-meter-high ceilings to provide enough ventilation.

The building, wrote Villalon, “deserves to reclaim its heritage status” as it is one of only few surviving Art Deco structures in Manila.

Other notable Art Deco structures in the city include the North and South Syquia buildings, Miramar and Bayview hotels, Rizal Memorial Complex, and Metropolitan Theater of Manila.