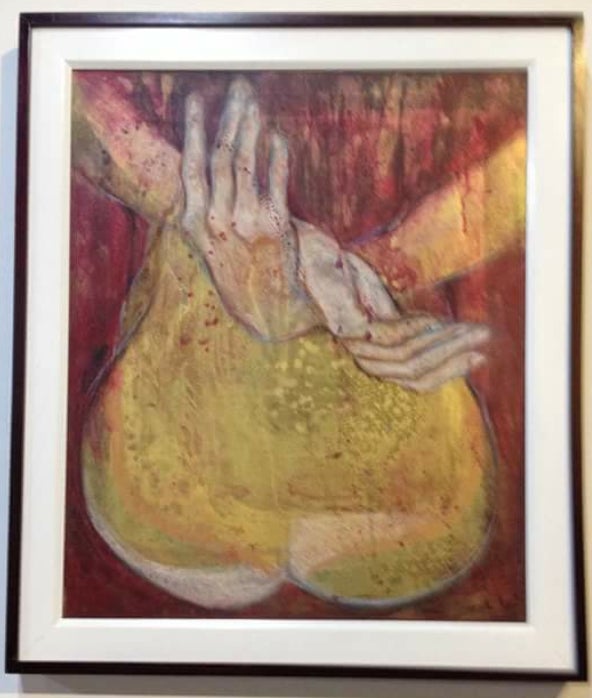 Artists paint the colors of depression and mental illness

ARTISTS have the gift of translating the visible world onto canvas. Some take the more difficult challenge of transmitting invisible pain into gobs of color.

Yasmin Almonte is among a group of artists who showed in Cubao’s Sining Kamalig last April. Their exhibit called “Despite My Being…” was a notable attempt to draw attention to depression and other forms of mental illness suffered by the artists themselves.

Almonte, a Fine Arts professor at University of the Philippines, considers art among her lifesavers.

“I need to paint because I need to breathe,” she told Inquirer Lifestyle in an e-mail interview.

“This is my way of truly baring myself to others, without shame or guilt, without fear. My palette could be the ‘darkest dark’ or have the brightest brights, depending on where I’m at emotionally,” she added.

Almonte calls herself a “survivor of depression,” a condition she said “possibly brought about by my life’s extreme challenges.”

Sining Kamalig said Almonte’s depression was caused by both nature and nurture. The artist had “a disposition to be sad” even as a young child.

The doctor’s diagnosis of depression came when she was a teenager. She said “relapses” occurred while she lived abroad, apparently triggered by the distance from family and home.

“At one point in my life, I decided to be well. For me, it became ‘soul over mind over matter.’ I looked at my ‘demons’ in the eye and decided to end the anguish, the fear and the pain,” she said.

Almonte noted that it was her family’s unconditional love, particularly that shown by her children, that “saw me through the darkness” and ushered the healing.

She called her noncommissioned pieces “diaristic,” adding that making them “is my way of expressing my thoughts. Through my art, I am able to weep without shedding a tear.”

Moments of joy and sadness are all recorded in color.

“There is no time for me to wait for my muse. My life is my muse,” Almonte said.

“Still Standing,” a larger-than-life work shown in Sining Kamalig, features three hunched figures where the colors red and black appear to be in a battle for dominance.

“Lace,” painted in brighter colors, has a pair of feminine hands seemingly tied together by something invisible.

There are still moments when the artist finds herself engulfed in darkness.

“When I am lonely, lost, I turn to my art. I cry through my paintbrushes. When my painting is done, I am grateful. I know that I will be fine,” she said.

Liongoren noted that although he grew through the discovery of his personal element, “my quest for self-knowledge because too agonizing at one point, I had to take a leave of absence from art school.”

Fontanilla Dimapilis confessed she was “in constant battle inside my head and with myself, even more so with society’s lack of awareness on what’s going on with me and people like me.”

Her work “Mania,” a vertiginous blend of colors, was apparently painted during a happy period.

“Euphoria is freedom; a free-flow of energy and creativity. I seize the moment when my monochromatic rainbow reacquaints with colors,” she said of the work.

Sining Kamalig said painter Rafael recalled his “scariest experience” as a child when he looked at people’s faces and saw them “melt, morph and distort” before his eyes.

“I though every child experiences the same thing. It was not until I was 28 years old, I was clinically diagnosed with bipolar condition,” he said.

Even sounds added to his discomfort and Rafael felt his condition getting worse.

Art allowed Rafael to share his view of what color is. “Being bipolar is no longer a big deal for me. The most important lesson that I’ve learned is that I Love and accept all that I am… I even believe now that the monsters (morphing faces of his childhood) are part of something beautiful…” Rafael added.

Tisa_Arte_de_T pointed out that depressed people have no intention of becoming or staying that way. “What we need is for people to take us seriously. We should stop the stigma and be more realistic (in thinking that) depression is serious,” she explained.

Sining Kamalig’s Simon Balboa noted that despite the recent effort, many artists “refuse to come forward because of shame and stigma. It is a risk for them to come forward. The exhibit is to celebrate (the artists’) acceptance (of their situation). What they suffer does not define them.”

A support group will soon be organized to sustain the support for these artists.