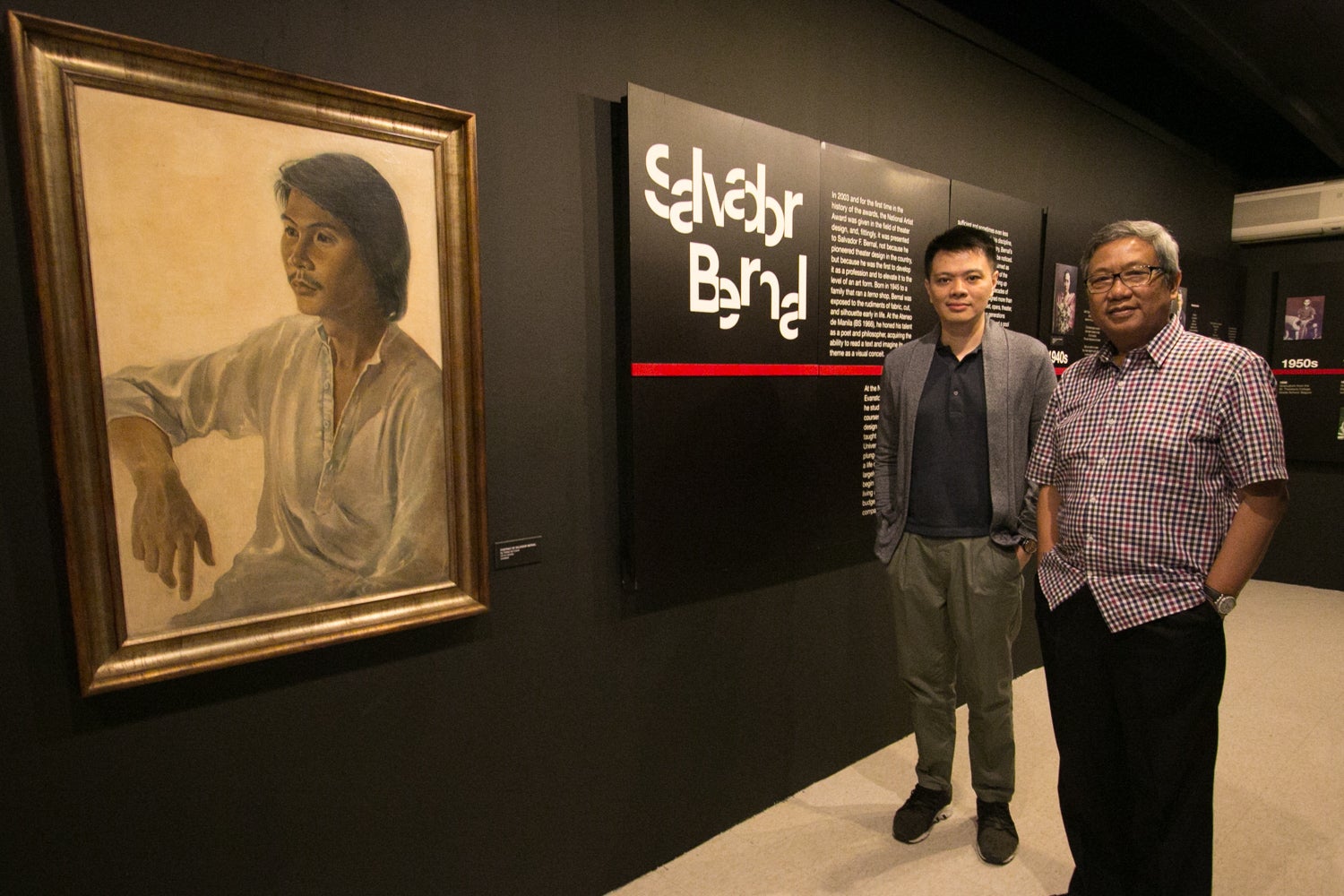 EMBEDDED in the darkness of the corridors are small, brightly lit windows. Each window is a world by itself, with intricate backdrops and cardboard figures. Each represents a dramatic production designed by Salvador “Badong” Bernal—and this exhibit is the multiverse of his achievement.

There has only ever been one person named National Artist for Theater and Design—Bernal, who was proclaimed such in 2003. This wondrous exhibit, “Badong: Salvador Bernal Designs the Stage,” shows why. “Badong” is running at the Ateneo Art Gallery until July.

The small windows are scale models of Bernal’s designs, from productions as diverse as “Sa Bunganga ng Pating,” “The Magic Flute,” “Sa North Diversion Road,” “La Boheme,” “Ang Kiri,” “Lysistrata” and “Lapu-Lapu.” Even in their miniaturized form, each design strikes with dynamism and meaning.

Alongside the scale models are displays with the full-size costumes of “The Magic Flute” and “Lapu-Lapu,” giving the viewer the feeling that they have sprung from the models into human size right before the viewer’s eyes.

After having premiered at the Cultural Center of the Philippines (CCP) in 2013, the “Badong” exhibit was sent on a tour of the provinces; the Ateneo is the 10th venue for the touring exhibit. “Badong” is curated by Dr. Nicanor G. Tiongson and Gino Gonzales.

“There was no one style,” Gonzales says of the displayed designs.

“He looks into the mind of the director and amplifies that style. He’s like a midwife for the director to give birth to the production by way of design.” Tiongson explains. “Each design had an insight to add to the meaning pf the play. Production design was not merely decorative for him. That’s true of everything that he did.”

It was Bernal who made production design a powerful and integral part of the Philippine stage, adapting each design for the specific play, but also bringing a uniquely Filipino sensibility to the plays with the use of Filipino elements and materials.

Critic and writer Tiongson discusses these revelations in his definitive 2007 book on Bernal, “Salvador F. Bernal: Designing the Stage,” and deploys that knowledge in this exhibit.

“The main point is to really analyze all the elements or the reasons why Badong became the premier theater designer of the country,” he says. “We also want to introduce the whole art of production design which is often overlooked.”

Several walls of the exhibit are devoted to a long timeline of Bernal’s life, which is crucial, since he did so many creative endeavors—writing poetry, co-authoring the book, “Patterns for the Filipino Dress: From the Traje de Mestiza to the Terno, 1890s-1960s,” teaching and directing plays.

Born Salvador Floro Bernal in Dagupan City, Bernal wove his magic on over 300 productions before his death in 2011 at age 66. He collaborated with the greats. In many ways, he shaped the look of the Filipino stage as it is today.

Tiongson met Bernal at the Ateneo when they were students in the 1960s; they became longtime friends and collaborators. “I saw his productions,” Tiongson says. “Badong would invite me. His dream was to have the production design center. That one we built for him.”

The CCP Production Design Center, the first of its kind, was opened in 1992.

Gonzales was one of 10 students in Bernal’s Production Design class at Ateneo’s Department of Communication in 1994. After graduation, Gonzales became Bernal’s apprentice along the way of earning his MFA at New York University’s Tisch School of the Arts, before becoming an internationally recognized production designer himself.

“He set a bar and it’s important for the students and viewers to see how high that bar was set and for them to be inspired to aspire for that bar,” says Gonzales.

“It’s important that we show the process, such as the preproduction phase, with the drawings and scale models that a lot of designers now skip. There’s a lot of lazy work that needs to be curtailed… There’s a lot of razzle-dazzle now, but the content is lacking. The dramaturgical reading is often wrong. What happens is they’re after a special effect without thinking of the meaning the design connotes. The research now has designers asking, ‘what is your peg?’ Meaning, what am I going to copy? That’s the problem. It’s Google design.”

“I want to add that one important aspect of Badong’s work is the limited budgets he worked with,” says Tiongson. “People always use that excuse, ‘The budget is limited and we can only do so much.’ That’s not true. The poverty of the production did not mean the poverty of the imagination. Badong came up with really commendable work. That’s no reason for mediocrity.”

Tiongson identifies the 1997 musical “Lapu-Lapu” as Bernal’s greatest. “It was outstanding, one case where the production design saved the production itself. The whole idea worked so well, was so cohesive and arresting.”

Tiongson recalls a story from choreographer Edna Vida: “When he designed for Ballet Philippines, he set a standard that they had to work up to. When you see the set, you had to dance so well. It would be embarrassing if you didn’t. That’s the effect Badong had on artists. He pulled them up and demanded the best of them.”

It’s been almost five years since Bernal’s death but Gonzales and Tiongson say the next generation of designers can still learn so much from the National Artist.

The “Badong” exhibit amazes the viewer with its comprehensive charms (literally) big and small, yet one feels even it strains to contain the length and breadth of Bernal’s artistic genius. One traces the timeline of Bernal’s creative life and is gobsmacked.

It is as Tiongson describes Bernal’s design prowess: “He had the ability to evolve and never repeated himself. His mind was always playing.”

It is as Bernal himself: “The realm of design ideas can be unmanageable, given many constraints in the different Philippine theater conditions. I feel that designer should also be responsible and be sensitive to financial and technical realities but nonetheless be bold in his visual statements. I am saying that a design is not only drawn from one’s ideas, dreams and imagination. A design can be put in paper, reduced to inches and feet, constructed as a practical piece. A design idea must speak as it sees the light on stage.”

“Badong” will set up shop at De La Salle University-College of St. Benilde next.