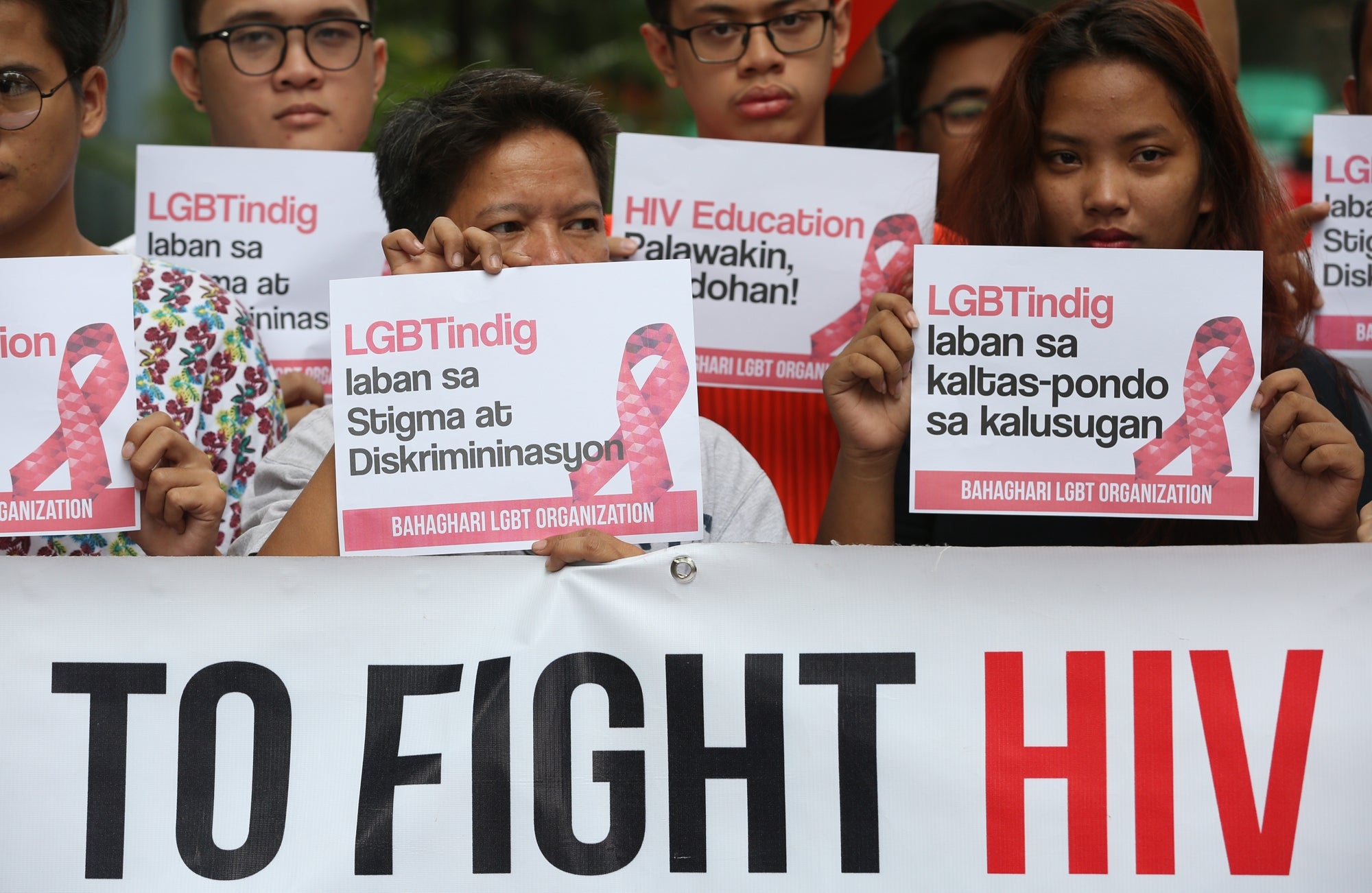 INTERNATIONAL AIDS AND CANDLELIGHTING MEMORIAL / MAY 14, 2016 Lesbians, gays, bisexual and transgender, urban poor and church group gather in front of National Council of Churches in the Philippines, Edsa, Quezon City, May 14, 2016, joins the International Aids Candlelighting Memorial, to raise the awareness of the public about human immunodeficiency virus (HIV) and (acquired immunodeficiency syndrome) AIDS and the efforts to curb its spread. INQUIRER PHOTO / NINO JESUS ORBETA

Riding a roller coaster would be last on my list when I’m in an amusement park. Yet early this year, I was tricked into getting on one.

I never imagined that the anxiety I had felt queuing up for the heart-stopping ride would haunt me three days later, when I took a test that could change my life.

I had reason to feel anxious about taking an HIV test, a blood test that would determine if I had contracted the dreaded human immunodeficiency virus (HIV) that causes AIDS.  My teenage escapades were nothing short of a roller-coaster ride, and like one, the thrills had been replaced by the sensation of one’s stomach suddenly dropping.

But I knew I had to take the test sooner or later, as the number of HIV cases in the Philippines has risen significantly over the last five years. According to the Department of Health’s (DOH) Epidemiology Bureau, from January to December last year, the country posted 7,289 new cases. Another 2,291 new cases were reported for the first three months of this year.  The trajectory is nothing short of alarming.

In May last year, the government called on the public to voluntarily have themselves checked, with five 24/7 hotline numbers posted on the DOH website for inquiries. None of the numbers worked.

Fortunately, the website of the nongovernment organization, Love Yourself, which also advocates HIV awareness, showed a directory of clinics, hospitals and groups that offer free testing.  The numbers posted on the page were updated and working, and I was able to talk to a health worker in Makati City who told me that the test was done for free, and that there was no need for an appointment. I only had to bring myself.

The following day at Makati’s social hygiene clinic at city hall, I was all nerves.  I realized that testing positive would definitely change my life, and I was quite uncertain if I was ready to accept that.  At 2:06 p.m., I entered the clinic and headed towards one corner of the room where three men were waiting for their test results—drug test results, I would learn later.

The corner designated for those taking the HIV test was hidden by a plant box to give the patient more privacy, I assumed.   Within five minutes, a health worker approached me, asked how many times I had myself tested previously, and what made me decide to have myself checked. She gave me a form, which I filled out with basic information, including the number of sexual interactions I’ve had.

To my surprise, given society’s apparent bias against people who might test positive for the virus, the attending health worker was warm, friendly and very accommodating, and made me feel that I was confiding to my best friend.

She explained thoroughly how one could contract the virus and how the test would be conducted. At the end of the “briefing,” she asked if I was ready to accept whatever the result might be. It made me pause, and she looked at me reassuringly.

At my nod to signal that I was ready, she called another health worker, who prepared the testing kit.  And so, at 2:27 p.m. on a humid February afternoon, I felt a needle prick on my arm and saw the blood sample collected in a vial. The wait after that may be the longest 13 minutes of my life.

Since I arrived some 30 minutes earlier, no other patient came into the room for the free HIV test. Every once in a while, patients would walk in, but they were there for the drug test.

Why the same room for both tests, I wanted to know.  So that those taking the HIV tests were not singled out, identified and stigmatized, the health worker explained.

As I waited for the test results, my past indiscretions flashed before my eyes. Much as I regretted them, it was just too late. I can only pray that I’d get past it and accept whatever fate has in store for me. And, more importantly,  hope that unlike the corner I was in, I wouldn’t be alone in the battle.

At 2:40 p.m., my heart started racing again when the health worker came in with an envelope bearing the test results. Again, she calmly asked if I was prepared for it, and I answered in the affirmative although my knees were shaking from uncertainty.

Negative! I heaved a sigh of relief. It felt like I was given another chance to make the right decisions and redeem myself.

Before I left, the health worker gave me some reminders: though I tested clear of the virus, I should not be complacent and should practice safe sex. It was a lot cheaper to use condoms than to live most of my life under medication, she added.

When I headed out, I felt very lucky to have gotten off the biggest thrill ride of my life unscathed.  Hundreds of others in the country, however, aren’t as fortunate.

KB, who tested positive for the virus in 2012, said that people like him who are still strapped on for the ride often feel “depressed, even suicidal.”

Now an HIV counselor, 38-year-old KB said he came close to losing his job at one point, when the human resource officer of the company he was then working for, said: “if I learn that one of you is HIV positive, you’ll immediately be fired!”

That incident “traumatized” him, KB said, leading him to underperform in his job. And because his medication was affecting his mood, his staff would often bear the brunt of his anger and disappointment.

His “daily adventure” with various sexual partners led to him contracting the virus, KB said, adding that it was his reaction to discovering his partner’s infidelity.

His HIV test at a government-run clinic in Pasig City nearly four years ago was as unfortunate.  The health workers who attended him were not as accommodating as those I had encountered in the Makati clinic.

“You can see that they were a bit disgusted and that their eyes had this certain judgment against you,” recalled KB who had boils and scars on his face at that time because he was still recovering from herpes zoster, commonly known as shingles.

When it was finally confirmed a month later that he had indeed contracted the virus, KB said the attending health workers were “condescending” and showed “no concern,” even blaming him for having had multiple sex partners.

“If it were another person who had a weak personality, he’d definitely lose it from the way they talked down to the patient,” KB said.

That incident led KB and his peers at an HIV advocacy group to provide support group sessions to young professionals and students who test positive for the virus, to let them know that there are people they can lean on who can guide them on this difficult journey.

Among the topics discussed by the group are accepting the reality of having the virus, and ensuring that despite the virus, they can still live a normal and healthy life.

KB laments that despite the rising number of HIV cases, the government has not been more aggressive in addressing the “lack of education” about the virus, especially how it is acquired and also avoided. He also pointed out how parents bear the greater responsibility at home, especially in this age of social media.

“Parents should know their children’s activities online. There are various ‘alter’ accounts and that’s how [young people] hook up,” he said.

But KB feels elated that Miss Universe 2015 Pia Wurtzbach has lent a face to the cause of increasing HIV awareness, as it makes testing for the virus “fashionable.”

“It’s okay to have yourself tested. There’s nothing to be ashamed of,” he said. TVJ