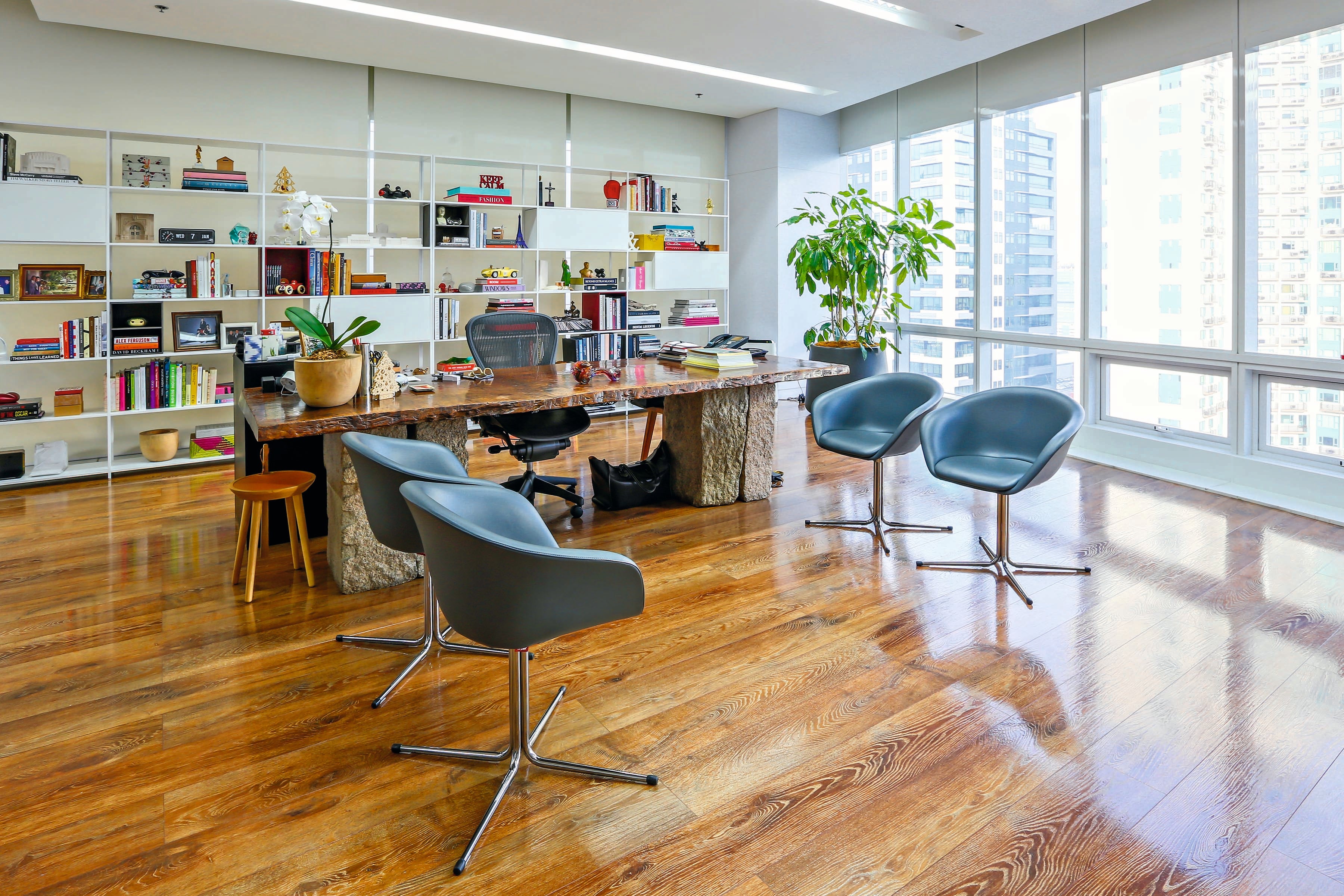 Chan’s work desk is angled towards the door for good feng shui. To contain positive chi, shelves and shades cover the glass windows to create stability. Photo by PJ Enriquez

He started out with two office rooms in Pasay City, but on the 25th anniversary of his business, Ben Chan, chairman of the lifestyle retailer, Suyen Corporation, and his family, put up a mixed-use high-rise in Bonifacio Global City.

Built by Asya Designs in partnership with architect Miguel Pastor, the 24-story Bench Tower consolidates the fruits of the family’s hard work and Chan’s persistence and risk taking.

The top six floors are dedicated to Suyen Corporation’s office, which includes mostly the marketing and creative teams and top management. At the lobby of the 19th floor, a black-and-white dot matrix blow-up of Korean endorser, Lee Min Ho, is set against a bold red background to make an impact. Inscribed on the screen is one of Suyen Corporation’s many philosophies: “We are a company of change. In changing, we grow; in growing, we evolve; in transforming, we make a difference.”

The dictum encapsulates the company story. It’s the oft-repeated tale of how Chan started in the family’s furniture business, Chan C. Bros., and used that knowledge to build fashion show sets. This was how, in those early years, Chan was exposed to fashion and developed strong bonds with the foremost fashion designers led by Joe Salazar and Auggie Cordero.

Before long, he ventured into designing men’s T-shirts and jeans as a concessionaire at SM. The business developed into the eponymous label Bench, which is now the flagship brand of Suyen Corporation.

After 28 years, Bench now has 533 stores around the Philippines and 31 Bench Body stores in China. Suyen Corporation has 18 local brands and 42 foreign brands such as Cotton On, Aldo and La Senza in its portfolio, and a workforce of 9,000.

Despite the influx of foreign high street brands, Bench has survived through powerful marketing and an extensive network. The business-savvy Chan diversified into restaurants and has brought in brands such as the Japanese chains Café St. Marc and Maisen.

“The return of investment in retail is longer than in restaurants. In the latter, if you do well, you can recover your expenses in a year. Retail takes several years, then after five years, you need to renovate. That entails investment again,” he says.

Dimensione has since widened its range of furniture and accessories sourced from various continents. Then again, Chan pulled a coup by opening the first Cappellini store in Asia, which targets the luxury market.

The core value of Chan’s firm is to do good. It does what it does best—to introduce new ideas, to offer good products and services at fair prices, and to help society, be it supporting charities or the arts, or helping typhoon victims.

Chan’s major advocacy is promoting nationalism in a market steeped in colonial mentality.

He observes how Hong Kong’s and Singapore’s local chain stores have been eclipsed by foreign high street brands. Not wanting to see the same fate here, he struck back by publishing books on popular Filipino culture and launching Bench’s #lovelocal, a campaign that purveys coolness through the patronage of home-grown talents and products.

“It’s a feel-good thing. The more we share, the more we are blessed,” Chan says on the company’s generosity of spirit.

Since Virgo is an earth sign, Chan is attracted to modern matte textures like imported engineered wool and unpolished metal that contrast with the romance of old wood. The contemporary interiors are interrupted by antique cabinets, farmer’s tables and teak cinema chairs. Aside from the patina of the wood and their craftsmanship, these pieces also serve a purpose—either for work or display—and provide a homey feel.

The eye-catching décor also reflects a Virgo’s penchant for details. The executive offices are furnished by items from Suyen Corporation’s brands. Artworks punctuate the neutral background with their colors.

In his home, Chan has a collection of Filipino modernists such as BenCab and Romulo Olazo. His office displays the works of post-modernists R.M. de Leon and Ronald Ventura to complement the contemporary interiors. Translights of Bench endorsers, framed magazine photographs from its magalog and Wig Tysmans’ black-and-white photographs of a young Richard Gomez—the original Bench endorser—echo company pride. Books on design, fashion and travel inspire Chan.

Sculptural plants not only provide the greenery in the office, they are also believed to improve employee productivity.

Reflecting the Virgo belief in well-being, an exercise room for Core Kinesis is the latest addition.

Chan’s penthouse office is decorated with European furniture in strong shapes, which reflects the company’s constant evolution. In contrast, his vintage work desk, a giant slab of narra held up by two slabs of piedra china, is a symbol of solidity and timelessness.

Plans are afoot to replace the long sofa with a Fritz Hansen glider sofa and an ottoman-bench.

“I’m still dreaming of another office where everything is accurate, according to our vision,” says Chan.

That’s the perfectionist in Virgo speaking.