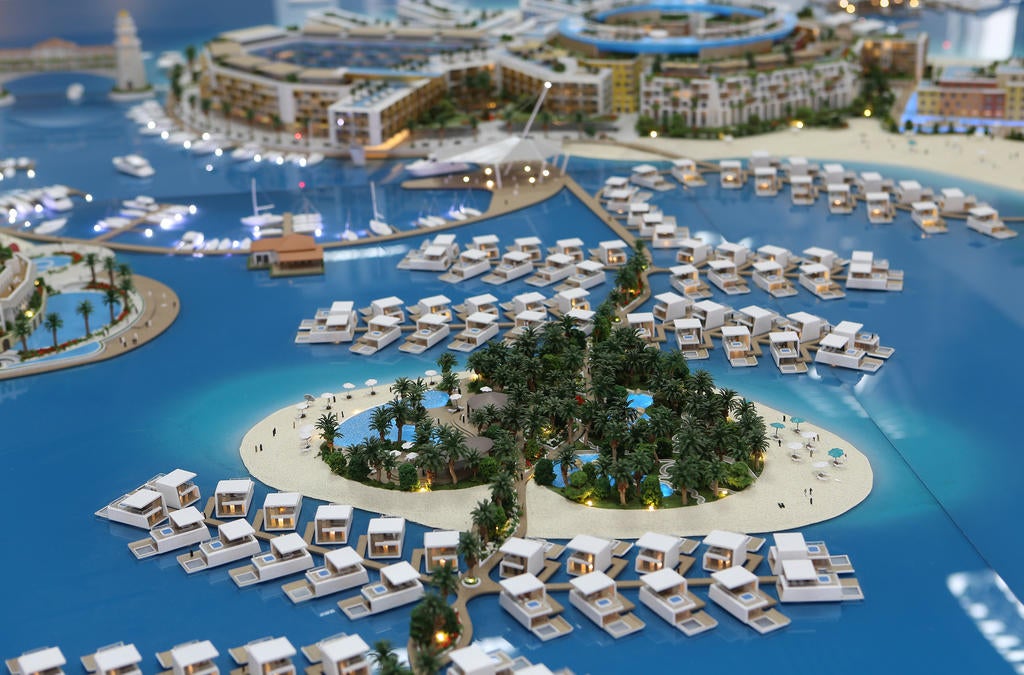 In this Monday, May 9, 2016 photo, a part of the architectural model of the Floating Seahorses is seen at the Kleindienst Group office in Dubai, United Arab Emirates. AP

DUBAI, United Arab Emirates — Surrounded by 300 deserted man-made islands, Dubai’s newest real-estate wonder has all the amenities of a luxury hotel — plus views of the bottom of the sea.

The Floating Seahorse villas feature submerged bedrooms whose curtains open up to transplanted coral and the waters of the Persian Gulf. Wide-mouthed groupers and other fish dart past its over 15-centimeter-thick (6-inch-thick) acrylic windows.

But the Seahorses, part of an ambitious larger hotel development called The Heart of Europe — which will be built on reclaimed islands — have an even more grandiose-sounding aim. They want to save The World, as the long-stalled Earth-shaped island project off the Dubai coast is called, by providing a major development that jumpstarts building on its other sandy islands.

“We wanted to be the first one. We always knew it’s a risk and a chance,” said Josef Kleindienst, the chairman of Kleindienst Group, which is building the Floating Seahorses and the Heart of Europe.

He added: “The World has started to move.”

Dubai is already home to the world’s tallest building, an indoor ski slope and man-made islands viewable from space. But while the machine-crafted frond of the Palm Jumeirah archipelago flourished, The World stopped spinning with Dubai’s financial crisis of 2009.

Together with several other state-linked firms, Nakheel, the government-owned builder behind both projects, found itself at the time unable to repay billions of dollars in loans. Those defaults triggered a collapse that forced neighboring oil-rich Abu Dhabi to give Dubai a $10 billion bailout.

Other projects have restarted in the years since, nudged by improving investor confidence and Dubai hosting the upcoming 2020 World Expo, or world’s fair. But The World project as envisioned by Dubai’s ruler, Sheikh Mohammed bin Rashid Al Maktoum, has languished.

Today, only two of the 300 islands are being actively used. One is a day-use beach resort on Lebanon island, another is an island with a luxury villa and a helipad believed to be used by Dubai’s ruling family. The Dubai Media Office did not respond to a request for comment about the island.

In a statement, Nakheel acknowledged only two islands are developed, but said that financial deals involving the project are resuming on the project.

“We continue to see a renewed interest in The World, and have reached settlement agreements with third-party developers on payments worth over 1 billion dirhams ($272 million), allowing work there to recommence,” it said, without elaborating.

Some construction material and machinery can be seen entering The World by boat from Dubai’s coastline. Earth-moving equipment rattles over the sandy dunes of one of the first islands after The World’s circular breakwater, which offers the project its globe-like shape and stills its currents.

The rest of the islands are deserted until reaching the dock of the development run by Kleindienst, a former Austrian police officer and one-time member of the far-right Freedom Party who has written about making his fortune in stocks. He also wrote a book about his party obtaining classified police files on its political opponents, something its leaders denied in an ensuing political scandal in Austria in 2000.

At the dock, a sign painted in black, red and yellow announces in German: “Welcome to Germany: Passport Control.” Behind it, the initial cement-block frames of two planned Bentley-branded villas stand on Sweden island. Plans call for 10 similar villas to be built there, as well as hotels, restaurants, bars and other attractions on empty surrounding islands as part of The Heart of Europe development.

The real star, however, is the Floating Seahorse anchored alone in a nearby channel.

Weighing 240 tons, the villa on the sea smells of the Myanmar teak adorning its walls. A wet bar on its top floor is both open-air and air conditioned, with a hot tub. Below, the glass walls of its living room and dining room open out on blue beach chairs and netting allowing a look at the water below.

Below deck, automated curtains in the bedroom open out onto an under-the-sea view. Coral transplanted from the site of the Burj Al Arab, Dubai’s iconic sail-shaped luxury hotel, sits on the lip of the Seahorse under shade, drawing the sea life.

“It’s amazing. It attracts a lot of fish,” said Gianni Malerba, the director of hospitality operations for The Heart of Europe. “It fits very well with the ‘wow factor’ of Dubai.”

So far, Kleindienst said his organization has sold Floating Seahorses to both people who will use them and others who will rent them out as part of the planned hotels at the site. The latest models of the Seahorses have a list price of 12 million dirhams ($3.2 million).

Kleindienst said they plan to open the heart-shaped St. Petersburg island by October, with dozens of Seahorses connected to water, electricity and other utilities on the island via gangplanks.

For now though, the area runs off a generator and the model sits alone, drawing curious customers. Dubai’s skyscrapers are visible on the horizon.

“If this would happen in any other country, even if it is done in 50 years, nobody would consider it as delayed,” Kleindienst said. “Only in Dubai, everyone expects it needs to be done in one day.” TVJ