It’s as if we never said goodbye to HK | Lifestyle.INQ ❮ ❯ 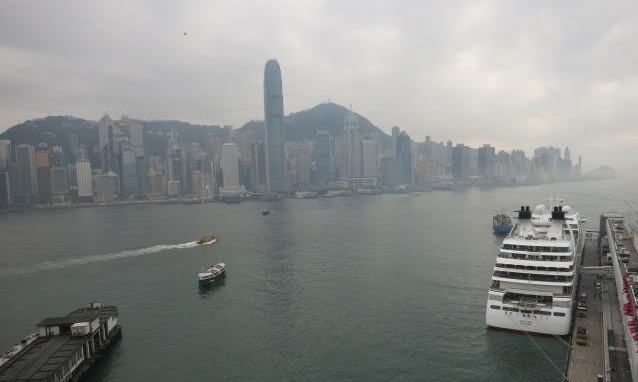 It’s as if we never said goodbye to HK

Circumstances and various travel plans have kept me away from Hong Kong for eight long years. Now, visiting this port city once more, I felt like being reunited with an old friend.

Like most visits, the reunion was full of rediscoveries and reminiscences, of bittersweet memories, and twice-told tales that seemed new with each retelling.

Checking in at Marco Polo Hong Kong Hotel was just the beginning. The construction along the road that seemed to never get finished the last times I was there had apparently been completed.  Without the obstruction, one can now walk easily to luxury stores like Chanel and Fendi which line the length and breadth of Canton Road.

Marco Polo Hong Kong Hotel looked grander and plusher than I remembered it to be. The lobby was spacious enough to accommodate the long lines of guests waiting to check in or check out, while in one corner upholstered chairs clustered around tables formed an inviting lounge.

Upstairs in our room at the Continental Club, panoramic windows opened to a breathtaking view of Victoria Harbour. I watched one boat speed by as another bobbed up and down the shimmering waters.

Meantime a cruise ship idled by, juxtaposed against the towering skyscrapers which were silhouetted by the afternoon sun.
Farther away, distant mountains loomed like ghostly apparitions in the mist. I had seen this harbor many times, yet now, eight years later, it was still as enchanting and haunting as ever.

Harbour City, a multistory complex of shops and restaurants, was our next stop, not least because it was just a few floors down from our hotel. Rustling our way through the crowd, we found a familiar spot: the food court surrounding City’super, a supermarket brimming with all kinds of imported goods: vine-ripened tomatoes from Italy; Wagyu beef from Australia; Fine de Claire oysters from France; and Arus melons from Japan.

The last time we were there, the food court was a like a fiesta of Japanese, Korean, Thai, Mexican, Italian and American food.  The crowd was so thick we could hardly get a table.

Now the place looked different. There seemed to be fewer food booths, though they’re larger and more focused on their menus.

What hadn’t changed was the crowd. Though it was way past lunch time, dozens of people were still milling around, ordering food and grabbing whatever table space they could find.

I ordered a platter of pad Thai, a thick pile of noodles and bean sprouts speckled with bits of chicken, seafood and vegetables.  My husband had gyoza, steamed Japanese dumplings bursting with ground meat and vegetables.  Both were satisfying enough to assuage our hunger.

And speaking of restaurants, we knew we couldn’t visit Hong Kong without dropping by our favorite hamburger place. We were we glad to see that Dan Ryan’ s Chicago Grill was still there, tucked away in a quiet corner of Harbour City.

“We serve American-size portions,” the menu warned, meaning their servings are huge and plentiful. That didn’t stop us from ordering one classic hamburger each. As American as the Stars and Stripes, the burger is 100 percent US prime beef, tucked into a Sally Lunn bun, a bread that originated in Bath, England, but became popular in the United States during its colonial period.

It was served with a large slice of onion, a bright red tomato slice, a large pickle and crisp French fries. Just as our taste buds remember it to be, the hamburger was pure succulence, dripping with juiciness and flavor.  It tasted even better when topped with the onion, which  tamed the richness of the beef and kept it from becoming too overwhelming.

We were too full to order dessert, but I swear, next time I go to Dan Ryan’s, I’ll have the American apple pie and/or the carrot cake, with its cream cheese frosting.

After dinner it was time to visit another favorite place—the Mongkok night market, which we found readily with help from the free Handyphone lent by the hotel.

Perhaps calling it a night market would no longer be accurate.  The place now opens at 11 a.m. and closes just after 10 p.m., unlike previously when it opened at sundown and closed only around midnight. Nevertheless we managed to sneak in about an hour’s worth of shopping.

Oh, the things bargain hunters can buy in Mongkok: everything from silk blouses to children’s clothes; toys that spin, run and fly; sneakers and sandals; watches and key chains; handbags and suitcases; T-shirts, and gasp! socks with the face of President Barack Obama printed on them. Blouses sold for about HK$100; images of flying superheroes went for HK$120 but only after some hard bargaining; and wallets cost four for HK$100 (depending on the quality).

In Causeway Bay the next day, we searched for the Japanese department stores where we used to shop. Alas, except for Sogo, we could no longer find the rest.   Were we just on the wrong side of town, or have the stores become another casualty of change? Worse, did the stores really exist or was our memory playing tricks on us?

The burata cheese which started our meal was planked by generous slices of fresh tomatoes and Parma ham. Chef Andrea said they import huge slabs of mozzarella cheese direct from Italy and, thanks to Hong Kong’s efficient handling of imports, the cheese arrives in the kitchen as fresh as the day it leaves Italy.

The dish represented much of what his cuisine is about, said Andrea. Simple and elegant, it was a fine introduction to the rest of the meal, which segued on to a dish of linguine with Sicilian red prawns and a hefty sauce made from stock that was reduced over low heat for three hours.

When we raved about it, chef Andrea explained that the secret is patience and timing, and gentle, slow cooking. Much of the work, he said, is done way ahead of serving time, so that the flavors have the time and space to develop.

We were equally impressed by the meat course. A generous slab of foie gras was perched on a pan-seared tenderloin of beef, creating complexity and interplays of textures and flavors, the velvety, earthy foie gras contrasting with the tender succulence of the beef.

A generous drizzle of black truffle sauce tied the flavors together.

Desserts at Cucina are presented not on a trolley tray as customary in many restaurants. Instead, the waiter scrolls through a tablet to show us photographs of tempting creations such as a deconstructed tiramisu made with mascarpone cheese, Valhrona chocolate ravioli with berry sauce, and chocolate mousse with vanilla ice cream and a topping of meringue.

Perhaps the best was the one I had, a sphere of chocolate couverture that bloomed open upon the pouring of warm chocolate sauce, revealing a scoop of vanilla ice cream.

As we were leaving for the airport the next day, a light drizzle fell, shrouding the city with a thin veil of mist. I watched as scene after scene receded from view: the luxury shops, the market selling fresh produce, the silvery waters of Victoria Harbour, a skyline of skyscrapers, and distant, mysterious mountains that look like images from a half-forgotten dream.

I knew then that I wouldn’t wait another eight years before returning to Hong Kong.