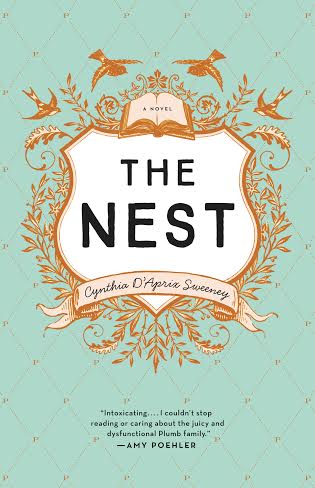 THE COVER of Cynthia D'Aprix Sweeney's "The Nest"

Insightful family dysfunction is at the heart of ‘The Nest’

BOOKS about dysfunctional families are a dime a dozen, but when one breaks through the mediocre and predictable rabble, it’s usually a true standout.

That is the case with Cynthis D’Aprix Sweeney’s debut novel, “The Nest” (Ecco, New York, 2016, 354 pages). At first, the elements seem ordinary, the setup a little tired.

The four Plumb siblings are looking forward to a large amount of money (the titular Nest) when their youngest, Melody, turns 40. But when golden-boy brother Leo is involved in an adulterous car accident with a 19-year-old waitress named Matilda, the Nest is almost drained in order to hush up the tawdry details.

The problem is that several of the Plumbs were relying on the Nest to save them from financial problems.

The highly strung Melody lives in a house she cannot afford on her own and wants good college education for her twins Nora and Louisa. The gay antique dealer Jack has been borrowing more than he should be in order to keep his dream country home.

Bea doesn’t really need the money and is more concerned about her family and her (lack of) writing.

Leo, suddenly no longer invincible, must deal with the aftermath of the accident, his substance abuse and getting back on his feet after years of living as a spendthrift.

It’s not so much what the Plumbs are going through that will engage the reader, but how Sweeney slowly peels back the layers on each Plumb’s problems.

“The Nest” starts out in a direction you may guess, but then the book’s plot begins to scatter to many different directions, following some unexpected characters.

“The Nest” delves into surprising territories: a remnant of 9/11, the menace of mortgages, the literary establishment, the solitary life, among others, all set against the backdrop of New York’s different streets.

It’s as much a portrait of American family as it is American financial paranoia. All this rolls out as something that Sweeney could describe as “something private and determined and deeply terrifying.”

The deeper you get into “The Nest,” the deeper you get to know the Plumbs and the people who pass into their orbit, with Sweeney focusing her razor-sharp attention on each one within their individual chapters.

Choose your favorite flaw: pride, deceit, lust, greed and so on. Readers will wind up figuring out which Plumb they are most like, even as they wind up wishing one thing for the siblings: “Maybe they could move on, try to forge relationships with one another that weren’t about that blasted inheritance.”

Instead of darkness and shock that’s become commonplace in contemporary family dramas, “The Nest” presents a family drama that is funny, observant and deeply affecting. You don’t even have to like the Plumbs to find insight into their problems. You might even wind up cheering for them, wanting them to find some safety and finding things like “the beauty of rediscovering the starting line.”

That last line demonstrates just how well-written “The Nest” is. Sweeney reels the reader in with the provocative premise and then just holds them hard with her prose. No wonder it has become a best seller.

The thing that divides and brings together families like the Plumbs rings eerily and thankfully true. What appears soap-operatic on the outside reveals something warm and insightful inside. Cynthia D’Aprix Sweeney’s “The Nest” offers enough reading delight to be worth every penny of that awaited inheritance.