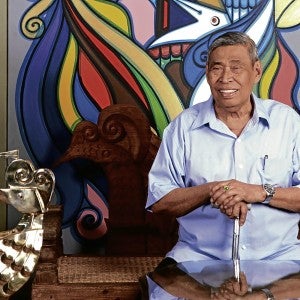 IT WAS in 2006 when Abdulmari Imao Sr. became the first Moro to be named National Artist of the Philippines.

While also a painter, ceramist, photographer, filmmaker and writer, Imao was named National Artist for Sculpture because his larger-than-life monuments of Muslim and regional heroes from Batanes to Tawi-tawi stood as a clear testament to the pride, honor and bravery of a culturally rich people.

Now innovative fashion brand Freeway is honoring Imao, who passed away in 2014, by featuring his work in its 2016 National Artist Collectors’ Series.

Imao’s visual creations are the latest design inspiration for Freeway’s 40-piece collection ranging from casual and dressy sublimation print tops, graphic tees and jumpsuits that can be worn from day to night.

Ladies who love both fashion and art and are as trailblazing as the artist himself are in for a treat with this collection that features woven fabrics, sheer and lightweight georgettes, thick knits and comfortable stretch fabric that have been perfected to flatter one’s figure—all in the name of fashionalism.

“This is a wonderful platform in which to pull out the works from the context of galleries and museums and into the public sphere,” said Imao’s son Abdulmari “Toym” Imao Jr. during the collection’s launch hosted by Lexi Schulze at Glorietta in Makati City last week. “The artworks become more accessible.   This is the closest thing that they can probably do, and besides wearing something that you appreciate visually, it’s also a matter of pride that you are wearing something done by a National Artist.”

He praised Freeway for breaking the mold by honoring National Artists compared to others in mainstream fashion.

Toym said: “We gave Freeway our 100-percent trust because that’s the least we can give them, and we are happy with how they interpreted it.”

As to how his father would have reacted to the collection, Toym said Imao “would be tickled pink.”

He explained: “It’s a reincarnation of his vision. It’s very flattering. The images he created have reached mainstream, and for an artist it’s a big deal that his works are not just relegated to museums and galleries and a wider audience is able to appreciate his art.”

Also announced during the launch were the winners of Freeway’s art-bag design contest. The award-winning designs by Leah Liza Advincula (La Filipiniana Terno) and Dondon Cerbito (Bugan) will be available at Freeway and The Row Stores nationwide.

And while the country waited for Rodrigo Duterte’s turn to sit in Malacañang, Toym said a president coming from Mindanao via outstanding vote was a very big message and now was an opportunity to focus attention on the region and what it had to offer culturally.

“I wish my dad were still alive so he can personally contribute to this,” Toym added. “As his family, what we can do is share his story. We are thinking of donating a sizable part of our family connection to museums and to do rounds of exhibitions around Mindanao to inspire the youth through the story of the struggle and eventual triumph of Abdulmari Imao.”