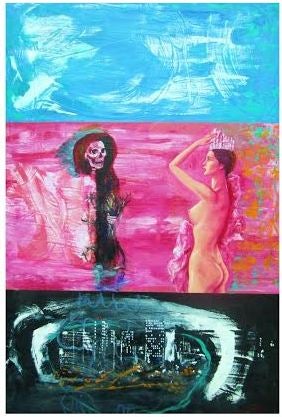 Roy Veneracion opens up to the world

IN ROY Veneracion’s solo exhibition currently on view at Altro Mondo Gallery, there is one particular work that will likely be the cynosure of all eyes.

The reasons are varied, and at once amusing and morbid, but surely and predictably Pinoy: The subject is a national obsession—the beauty pageant competition.

What’s arresting, however, about Veneracion’s work is his equation of beauty with a theme, or thought, that is indubitably farthest from the viewer’s mind. The title is “Beauty Queen: Eros and Thanatos.”

And so, what have we here? Are the two abstract panels essential to the creation of a Roy Veneracion artwork? Or, if abstraction were sufficient unto itself, what need was there for the representational depiction and literary narrative?

So, indeed, does Veneracion follow his own desires. Think of “Beauty Queen: Eros and Thanatos” then as the artist’s own De Kooning “Woman.”

But instructive, however, was Veneracion’s participation in last year’s   Finale Art File show titled “Line between Gestures and Color,” wherein five of the country’s top abstractionists showed their latest works. Veneracion ranged his works, grand size for grand size, against those of Gus Albor, Norberto Carating, Junyee and Nestor Vinluan.

Apropos the works of Veneracion, one reads in the exhibition notes: “Roy Veneracion moves away from the elemental and delves into the experience of the everyday. [His works] underscore the fluid, encompassing character of language itself—drawing parallels between this and the nature of contemporary art.”

At Altro Mondo, Veneracion’s show is titled “Finding Without Seeking,” a reference to Picasso famously saying, “I do not seek, I find.”

From this philosophy emerged the landmark sculpture—in the critical sense that it changed the course and concept of what constitutes a piece of sculpture—the singular piece titled “Bull’s Head.”

The work was precisely what Picasso found without seeking right within his studio: a bicycle’s seat and handlebar. Joined together, the work was pure simplicity and genius, ushering the practice of constructivist sculpture, beyond carving, modelling and casting.

In Veneracion’s close to half a century of artistic striving, always finding without seeking, a life story must unreel.

The word associated now with the artist is “syncretism.” It is the amalgamation of different religions, cultures or schools of thought.

Veneracion regards syncretic art as: “a strategy for making art in the 21st century. It is not an art movement in the sense that it proposes to replace the old order with a new order. It is the future order. It is intent not to promote ‘novelty’ for its own sake or ‘nostalgia’ for some glorious past. It accepts the constancy of change and welcomes it.”

Intriguingly there is another work in the Altro Mondo show titled “Time.” It is simply a reconstruction or a remembrance of the famous magazine with its distinctive font.

Responding to the current crisis inflicted by the Islamic State, the artist wanted to depict images of children carrying guns and being trained for combat. After much wrangling with his artistic conscience, he decided, finally, to slather the magazine cover with nothing but sloshes of abstract paint, swirling and sliding in the space that they have created.

It was a decision that catches a glimpse of the way the mind of Roy Veneracion works, a process of finding without seeking, opening up to the world, with all its beauty and terror, in the fluid motion and memory of time.