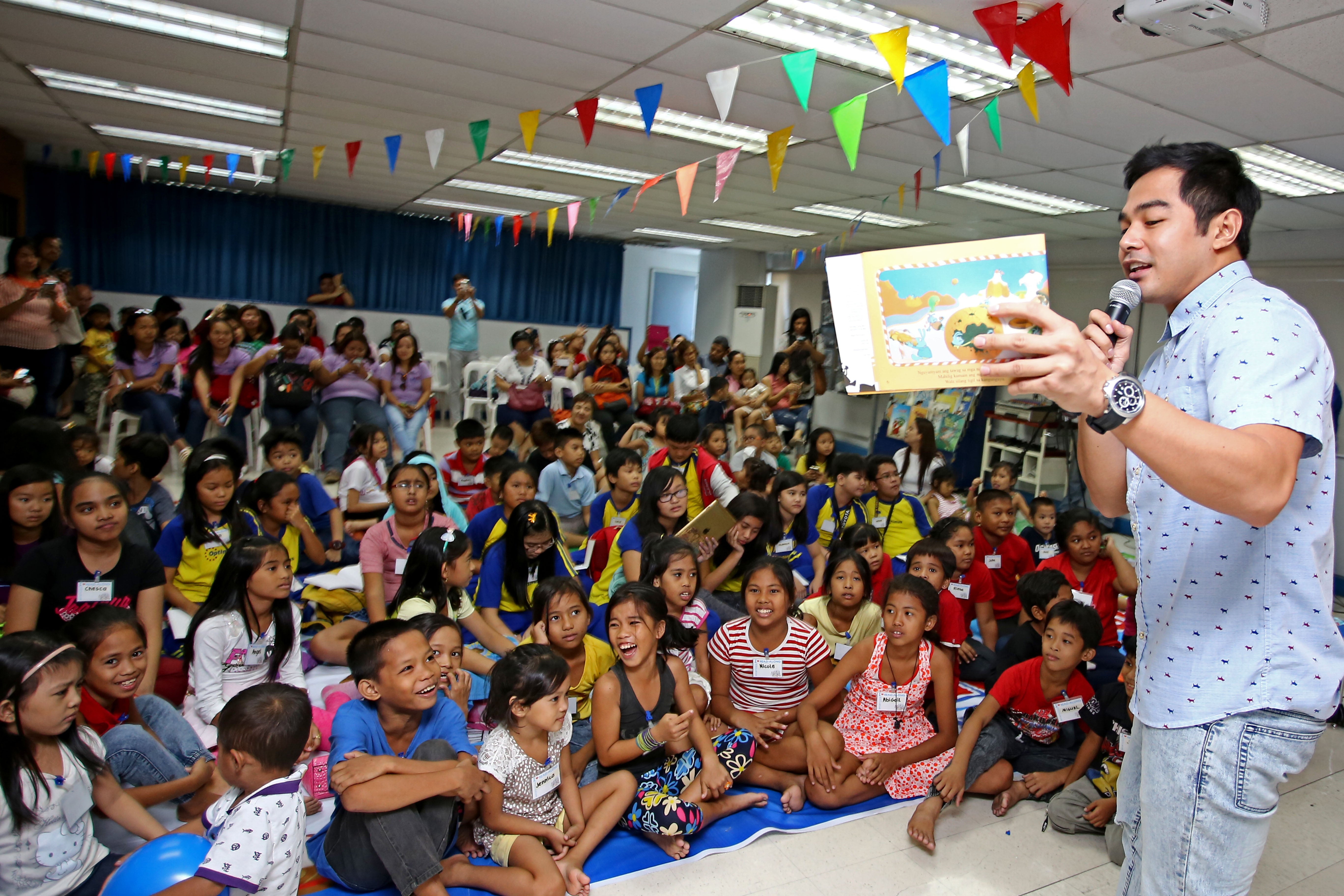 Story-telling, games, sweet treats and a dancing mascot marked the ninth anniversary of Inquirer Read-Along, which was attended by children from different organizations in Metro Manila and nearby provinces.

It was capped with a dance number with Inquirer mascot Guyito.

Meneses, Capule and Pulvera opened the session with “Maia’s Birthday Party” by Yvette Fernandez, a story about the love of parents for an adopted child.

The three MA Communication graduate students were the best participants at a story-telling workshop also held at the Inquirer on Friday.

“I’m usually afraid to speak in front of an audience,” said Pulvera. “But story-telling to kids helped me overcome my fear. It feels good to be able to do this.”

“As a first-timer, it was really enjoyable. Doing the actual story-telling is different from the rehearsal. The reaction of the audience is spontaneous and the children are full of innocence and curiosity. I want to do this again,” Capule said.

“It was really fun. We had good teachers at the story-telling workshop and they taught us different styles so we could find the one most comfortable for us. It feels good to read to kids,” Meneses said.

“It helped a lot in our story-telling that we know how to modulate our voices to mimic the characters in the story,” Fulgar said.

Returning storyteller Alves read Rene O. Villanueva and Lem Garcellano’s “Si Inggolok at ang Planeta Pakaskas,” a story about saving an edible planet that is slowly deteriorating because of abuse and gluttony.

“It’s always nice whenever I get invited to Read-Along because I meet different kids and I get to read different stories to them,” he said. “When I ask them questions at the end of the story, they are able to formulate their own interpretations and answers. This is nice because they are able to pick up different lessons and messages from the story.”

Crowd favorite Rodriguez, also a veteran Read-Along storyteller, brought the house down with his engaging retelling of “Noong Nakaraang Taon,” by Cruz, a story of a boy who recalls the activities he shared the previous years with the people dearest to him.

Mishca, 10, a Read-Along first-timer and member of Inquirer Junior Summer Camp, said it was fun to see many kids enjoying the stories as retold by the celebrities and veteran storytellers.

“I like the way Kuya Rich retold his story because he was so enthusiastic and made everyone laugh with his dance moves,” she said.

Eloisa Alforja, an observer and a kindergarten teacher from Laguna State Polytechnic University, said she and her fellow teachers learned techniques on making story-telling more enjoyable for their students.

Kids received school supplies and storybooks as prizes from Karen Lapitan as part of her birthday celebration.

Saturday’s session, hosted by Inquirer Libre editor in chief Chito de la Vega, was held in cooperation with Marinel Cruz of Inquirer Entertainment, Star Magic and Lendl Fabella of GMA 7. The kids were also treated to snacks from Dunkin’ Donuts.