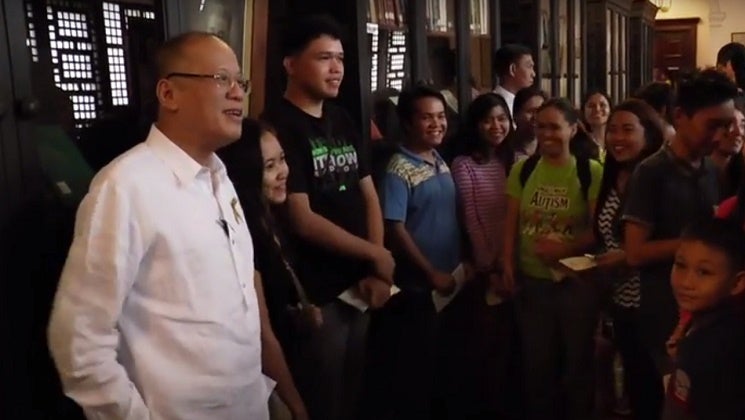 MANILA— They were at the Malacañang Museum to learn about the country’s past presidents when outgoing President Benigno Aquino III snuck up to them to say hello.

For a few seconds, the small group of museum guests was startled and speechless—until a few of them managed to squeal when they realized they were face-to-face with President Aquino, the country’s 15th President.

President Aquino himself was giving INQUIRER editors and reporters a tour of the museum as part of an exclusive interview.

“I’ll join you,” a smiling President Aquino said in Filipino. The students and teachers, who were listening to the museum tour guide, turned upon hearing his voice.

Some of them smiled and stared at Mr. Aquino while the girls blurted “Oh my gods!”

Soon, they had their photos taken with the President, who will step down from office at noon on June 30.

READ: Aquino says he’s done with politics when he steps down in 2016

The museum visitors were from the Footsteps Learning Center in Quezon City, the Notre Dame of Dadiangas University in General Santos City and guests of the Presidential Security Group.

Notre Dame students Susselle Sajot and friends said they wanted to thank President Aquino “for the six years and for the K-12.”

READ: Aquino brushes off critics, says PH is ready for K-12 program / Aquino: K to 12 program not a burden; PH ready for it

What’s the first thing Aquino will do if he steps down in 2016?