What drugs do to your body | Inquirer Lifestyle 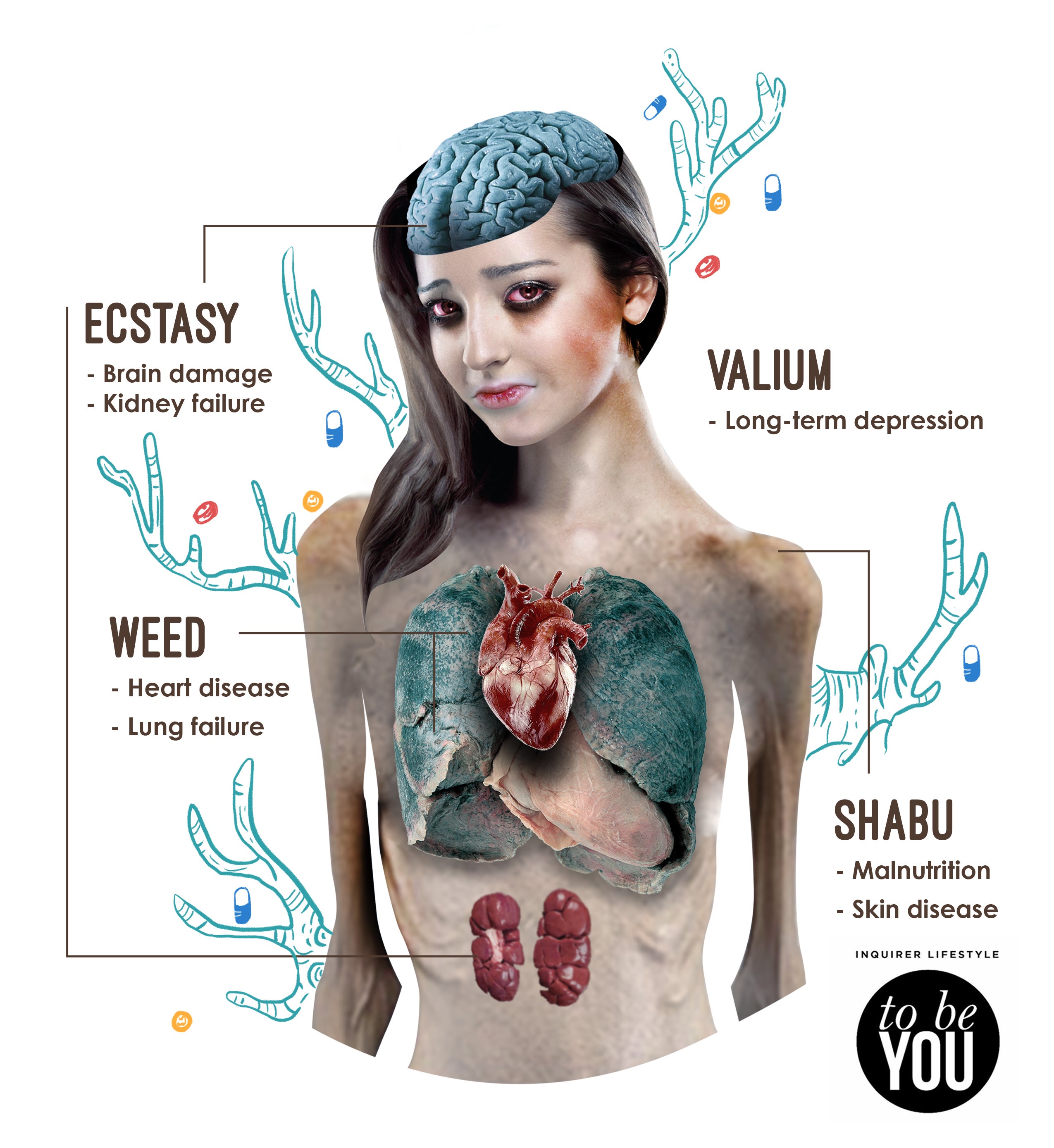 What drugs do to your body

SAY YOU’RE at a rave party enjoying the music and the company of friends. One of them disappears for a while, and when he comes back, you notice he’s suddenly acting strange; he’s hyperactive and sweating excessively.

Suddenly, he collapses; he’s having a seizure. You and the gang rush him to the nearest hospital where he is immediately treated by doctors. He survives, and as he recuperates, one of his attending physicians notes traces of an illegal substance in his blood test.

Drug use is prevalent among today’s youth. These days, kids not only have the resources to buy drugs, they also have easy access to dealers.

The concept of drug dependence is simple, and yet complicated. Neurotransmitters (chemical signals that send information throughout the brain and body) are received by receptors. Drugs compete with neurotransmitters for the receptors; this produces the “high” experienced by users. Take more drugs and the body produces more receptors, which results again in the “high” feeling.

Drugs are classified into seven categories: stimulants, depressants, narcotics, inhalants, hallucinogens, cannabis and dissociative anesthetics. As a medical student, I’ll explain how the four widely used drugs in the country affect our bodies.

Stimulants are also known as “uppers.” These are drugs that stimulate the central nervous system, making us alert and energetic. The effects, however, are temporary, and a “high” is usually followed by a “crash,” a feeling that includes exhaustion and depression, sometimes severe dehydration and even heart problems.
Those with a long-time addiction to stimulants depend on them not for the “high” but to function normally. Examples of stimulants include methamphetamines, cocaine and Ecstasy.

Depressants are also known as “downers.” These are the drugs that inhibit the regular function of the central nervous system. The most common depressant is alcohol, although it is legal to sell and consume it.
Another legal drug that is often abused and misused is Diazepam —more popularly known as Valium. Used as sleeping pill and to calm nerves, Diazepam can slow brain function, pulse, breathing, and reflexes, and can even lead to depression and death if not taken as prescribed.

Cannabis, better known as marijuana, is a little different from the other types of drugs because it comes from an organic source. Cannabis can affect all organs and systems in the body: it can increase heart rate, lower blood pressure and lower blood sugar.

These produce the effect of lightness and extreme hunger, or what people call “munchies.” For some users, however, ingesting cannabis can cause aggression or agitation instead of calmness. When mixed with alcohol, it can even lead to death.
Dissociative anesthetics are drugs that alter sight and sound perceptions and dissociate the user from his or her self and the world, leading to what they term as “out-of-body” experience.

These types of drugs were originally not meant for human consumption; large animals, like horses, were tranquilized using these drugs.

Because dissociative anesthetics hamper movement, they are used in clubs and bars as “date-rape” drugs. Short-term effects include an increase in heart rate and blood pressure, hallucinations, nausea, vomiting and respiratory problems. A notable example is Ketamine, which has since been controlled in the late ‘90s.

More than being a social or criminal problem, drug abuse is primarily a medical problem.

To combat the prevalence of drug use, one must rehabilitate the victims of drug use and abuse. This will lower the demand for drugs. A lower demand leads to lower sales, which will eventually put dealers out of business.

Investing in research will also go a long way in the treatment of drug abuse, and the prevention of relapse. Let us work together to inform, educate and stop drug abuse.