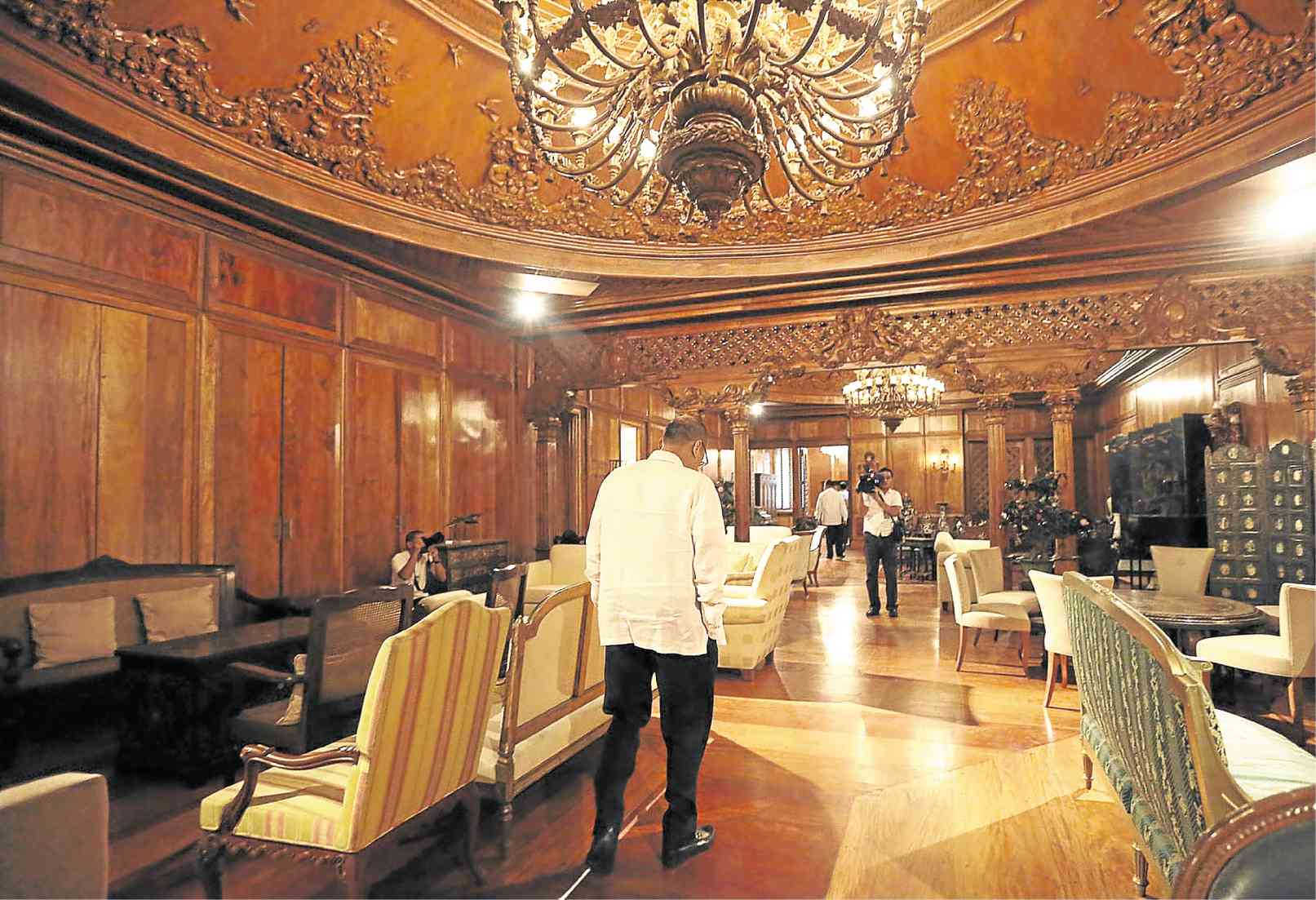 GHOST OF BEDROOM PAST Outgoing President Aquino seems to turn his back on the frills of public office as he leads a tour of Malacañang for Inquirer editors. This chamber, with its opulent chandelier and fancy ceiling used to be former first lady Imelda Marcos’ bedroom, he said. JOAN BONDOC

There’s no other way to describe the bedroom of former first lady Imelda Marcos at Malacañang but “Imeldific.”

Imelda herself coined the adjective to mean “ostentatiously extravagant.”

When President Aquino led Inquirer editors and reporters to Imelda’s bedroom, followed by a couple of Cabinet members, staff and security detail, there was a collective gasp from the group.

It was indeed a bedroom fit for a queen, not only for the sheer largeness of it, but also for the elaborate carvings on the wooden ceiling and stunning chandeliers. On the walls were dramatic lighting fixtures.

The tour the President gave the Inquirer on Tuesday was impromptu. After the two-hour exit interview with him, the editors asked if he could tour them around the Palace, including his office, and to their surprise, Mr. Aquino, who seemed to be in a good mood, said yes.

It was one of the rare times that Imelda’s bedroom was unlocked.

That Sen. Ferdinand Marcos Jr., the only son of Imelda and the late dictator Ferdinand Marcos, almost won the vice presidency in the May 9 elections was enough to open the floodgates of (harsh) memory—and jolt those who fought for the country’s democracy back to reality.

It was a near victory that would have brought the Marcoses a heartbeat away from the Palace, which they called their own for two decades.

President Aquino himself recognized the popularity of Marcos Jr. After all, he received 14.1 million votes. Mr. Aquino’s anointed one, Camarines Sur Rep. Leni Robredo, won the vice presidency by a nose, with 14.4 million votes.

The 56-year-old President admitted that perhaps his administration realized too late that many of those born after the 1986 Edsa People Power Revolution had been indoctrinated with the revised narrative of martial law peddled by the Marcoses and their supporters.

“There was so much that cannot be understood anymore … Like how do you actually explain how they managed to control information at that point in time?” President Aquino said at a press conference, noting that such truth could be unimaginable for the young who are used to having Internet access every minute of the day.

He said the Ministry of Information under Marcos was “actually like George Orwell’s book ‘1984’” as disinformation was widespread.

For someone who worked at Malacañang for six years (he lived in Bahay Pangarap), President Aquino remained in awe of the excesses of a family that ruled during martial law, for which his own father died and after which, his mother took up the torch in the fight for democracy and freedom.

A life-sized painting of the “Iron Butterfly” herself hung on a wall on the way to the President’s office.

It showed a beautiful young Imelda in a soft-flowing gown.

Communications Undersecretary Manolo Quezon, Malacañang’s official historian, described it as “one of the generic Imelda paintings” that was left in the Palace.

“No one bothered to move it. It has become a wall filler,” Quezon said.

Mr. Aquino walked briskly past the painting as he led his guests to his private office, Marcos’ old bedroom.

Isn’t it eerie to work inside a room once occupied by Marcos himself?

“At that time, I had no choice,” President Aquino said, referring to the time he had to move out of the Premier Guest House across the Palace itself.

In 2011, an inventory of government buildings was conducted, prompted by the powerful earthquake in Japan. It showed that the Guest House was structurally unsafe.

The only options Mr. Aquino had for a new office were the bedrooms of Ferdie and Meldy.

It’s quite ironic, given that the President is the only son of democracy icons Ninoy and Cory Aquino.

Mr. Aquino found Imelda’s bedroom too “ornate,” which was why he settled for the adjacent bedroom of the dictator.

Room with a view

Inside his office, an excited Mr. Aquino told the Inquirer that the room had a beautiful view—then he struggled to open the high wood and capiz window, which got stuck and made a cracking sound.

“Did I break it?” the President asked in Filipino, chuckling. And then he said he might have to pay for the window’s repair, to be deducted from his salary.

When finally Mr. Aquino managed to open the window, indeed there could have been a breathtaking view—had the Pasig River not been murky that day. “The river should really be cleaned,” someone quipped.

“It’s nice when the river is clear,” the President said, trying to convince his guests.

He pointed the Marcoses’ miniature golf course to Inquirer business editor Raul Marcelo, and tried to explain where the tee off was. But Marcelo ended up showing him where it was, the President being a nongolfer.

Mr. Aquino also sat on the windowsill, amazed that it was huge enough to fit a grown man. Then he called everyone to come nearer, as if to share a secret: he bent down to open a small door beneath where he sat. It showed an air filter that had not been used for a long time.

“Remember, this was Marcos’ bedroom,” the President said.

Quezon said that in fact, the entire bedroom, and all other “major rooms” such as the Ceremonial Hall were fitted with air purification filters.

“They were used to blow away the air from Marcos and to keep the air hospitable level clean,” Quezon explained. It’s been reported many times that Marcos had lupus and underwent regular dialysis toward the end of his regime.

President Aquino also showed his visitors another curiosity inside Marcos’ bedroom: an enormous built-in cabinet that opened to secret shelves.

Again, the President tried to pull open the cabinet himself but it was too large and heavy that his brawny aides had to help him. “Why would you have shelves behind a cabinet?” Mr. Aquino wondered aloud.

President Aquino kept his private room sparsely decorated, and quite a number of items had already been packed as he prepared to end his term on June 30.

His working table was the one used by his mother when she was President from 1986 to 1992.

Quezon said Mr. Aquino had specifically asked for it after he won in 2010 and he was about to hold office at Malacañang. The desk was found in “some obscure office” in the Palace, Quezon said.

On the President’s desk were two green highlighters, pens, two copies of the Constitution, a few documents, a fountain pen, a desk lamp and a CD, among other things.

On the wall behind the desk hung the official seal of the President. On the right stood the Philippine flag with the presidential flag on the left. On the table behind the President are the portraits of his parents, a framed copy of his oath of office, the Bible from his inauguration, a rosary and a crucifix, aside from two landline phones.

Quezon said Marcos’ bedroom was hardly touched when Mr. Aquino moved in. Only the toilet was renovated because it was no longer working.

“There was actually a mural of Paoay inside the toilet,” Quezon said. It was painted over.

Back in Imelda’s bedroom, the President appeared in awe of what looked like an expensive vault. What it used to hold was anybody’s guess.

He also showed Imelda’s old bathroom, which had a gold-plated sink. The bathroom wasn’t too fancy by today’s standards but would have been during her time. It did have an elevated bathtub.

Unused for several years now, Imelda’s room is now a lovely but quite creepy storage for a number of living room sets, furniture items, paintings and various ornaments.

Her famous huge bed, the one with the canopy, was no longer there. Quezon said it might now be in the National Museum, the Imelda museum in Marikina, or some government storage.

Quezon said Imelda’s room did not have windows “because that was the way she liked it.”

“Imelda slept only for a few hours and without windows, the room was in the perpetual time that she wanted it to be,” he said.

Another curiosity for President Aquino was the ceiling of the Malacañang Museum.

“Did you know it had swastikas engraved on it?” he asked, again like letting his friends in on a secret.

“Look,” he said, pointing to the ceiling. Indeed, there were swastikas up there.

Quezon said the museum used to be a ceremonial hall, and in 1967 was renovated by the Marcoses with the renowned architect Luis Araneta overseeing the work. It was when the ceiling with the engraved swastikas was installed.

“Why? We can only guess. The swastika is a symbol of power and prosperity,” Quezon said.

The museum’s second floor showcased the memorabilia of the Philippine Presidents, and a small group of visitors was in for a surprise when the 15th President himself walked up behind them and said he’d want to listen in to the tour as well.

After some squeals and giggles, and a lot of “Ohmygods,” the students and teachers asked for photos, to which a happy Mr. Aquino gamely obliged.

“Yes, we like him a lot and we’d like to thank him for the six years,” a star-struck student from Notre Dame of Dadiangas University in General Santos City told the Inquirer after he had his picture taken with the President.

According to a Palace quick guide, Malacañang derived its name from the Tagalog “Mamalaka-yahan,” which means the place of fishermen. Later, it was Hispanicized to “Malacañan.”

Quezon said the Palace the people know now “is almost entirely” different from its original structure, built more than 175 years ago and first owned by a Spaniard named Luis Rocha. It was also used as a country home by the Spanish governor-generals, and eventually became the seat of power.

Through the years, Malacañang had survived an earthquake and several renovations.

But the most extensive refurbishment was from 1978 to 1979, in which aside from the additional rooms, the Marcoses made it bulletproof, fully air-conditioned and had installed an independent power supply.

The reconstructed Malacañang was inaugurated on May 1, 1979, the silver wedding anniversary of Ferdinand and Imelda Marcos.

Asked why Imelda Marcos had the original Palace structure almost entirely demolished, Quezon said, “It was too small for them.” TVJ

Aquino fears return of another dictatorship