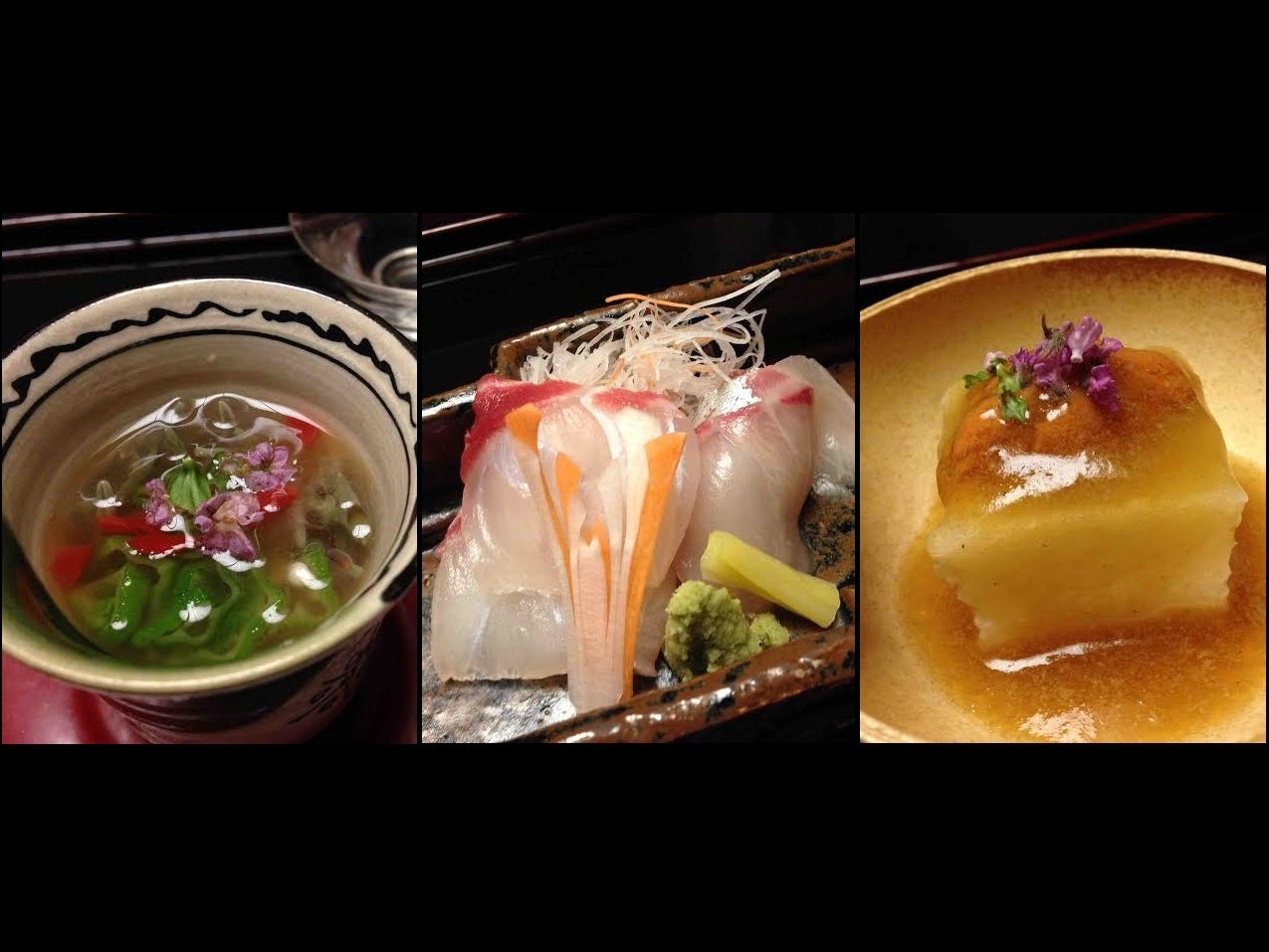 I’m not a very educated foodie, but I have had enough wonderful meals to know how unforgettable food can be. Thus, when my friends insisted on booking a kaiseki—a traditional multi-course Japanese dinner—on a recent trip to Kyoto, Japan, after wincing at the price tag, I figured, what the heck—I could live off vending machine food for the rest of the trip!

Our original choice was the venerable Kikunoi restaurant in Kyoto. The name literally means “chrysanthemum well,” from a legend about how water from a local well burst forth in the pattern of the beloved flower (kiku in Japanese). The well was preserved for generations, its water used in cooking exquisite food. The restaurant, which opened in 1912, is now  headed by third-generation owner-chef Yoshihiro Murata.

Since Kikunoi was fully booked, we were directed to its younger sister-restaurant, Roan Kinunoi, where we managed to set a  mid-week no-meat dinner for four (there were two vegetarians in the group). You tell them your dietary requirements and how much you are willing to spend; what’s in store will be a surprise.

A kaiseki  is the Japanese equivalent of a Western degustacion. It’s quite the art form in its consideration of various elements, not just taste; thus, the food’s texture and appearance, even the restaurant’s
design, are critical.

A  kaiseki changes with the seasons, because only fresh seasonal and local ingredients are used and presented on lovely plates, delicately arranged and garnished.

Although the whole production is at the discretion of the artist (read: the chef), a kaiseki is served in a traditional order: sakizuke, an  amuse-bouche; hassun, which sets the season’s theme and usually includes sushi and several small side dishes; mukozuke, the sashimi; takiawase, vegetables served with meat, fish or tofu; futamono, typically a soup served with a lid; yakimono, a grilled dish; suzakana, a small dish used to refresh the palate; hiyashi-bachi for summer meals, usually lightly cooked vegetables; naka-choko, another palate-cleansing soup; shiizakana, a main dish; gohan, a rice dish; ko-no mono,  pickled vegetables; tome-wan, a vegetable soup served with the rice; and mizumono, a dessert.

Chef Murata describes his place on the Roan Kikunoi website as a ryotei, a type of high-class Japanese restaurant. “A ryotei is no different from a set-meal dining hall or any other Japanese eating house, insofar as the aim is to serve up good-tasting dishes to customers.

The difference, however, lies in the fact that the food is just one part of the ryotei experience… I consider a ryotei to be an ‘amusement park for adults.’”

Born  to the family that opened Kikunoi in Gion, Kyoto, over a century ago, chef Murata actually studied French cuisine and apprenticed in Nagoya after graduation. He opened Roan Kikunoi in 1976.

He was recognized by his government as a Contemporary Master Craftsman, and for Kyoto Prefecture Industry Distinguished Service, in 2012.

Meanwhile, his little restaurant in Shimogyo-ku, Kyoto-shi, Kyoto—which looks like it can  fit only 20 people at most—received two Michelin stars in 2015.

The façade of the restaurant is nondescript and low-key, and the white-haired chef Murata himself welcomed us at the door.

We were led upstairs  to a minimally decorated  tatami room with a simple table setting, as the hostesses bowed all the way to the floor to honor us.

Chef Murata had prepared an Early Summer Menu, printed on fine handmade paper. For the sakizuke, we drank flavorful sake fragranced with iris leaf from a shallow cup, and dove into a very flavorful yam jelly topped with sea urchin and a light soy sauce gel with wasabi, and garnished with edible shiso flowers. More sake was poured from a copper dispenser into clear crystal cups.

The mukozuke was finely sliced pieces of tai and shimaazi (yellow jack) sashimi, followed by a takiawase of lightly seared bonito fish bathed in a ponzu gel exploding with taste.

The futamono was a true masterpiece of a soup. Japanese green tea noodles and green onions were wrapped in a thin omelet, which in turn was ensconced in a tasty piece of tilefish swimming in a fragrant broth of dried bonito stock, light soy sauce, Mirin and fresh green tea.

Before the yakimono or grilled course, a young chef came in with a basket of jumping sweetfish or ayu, as if to show us how fresh the next dish was going to be. The ayu returned  skewered on sticks and accompanied by eggplant as a suzakana or palate cleanser.

The summer hiyashi-bachi came in the form of two salads: one, an intensely flavored runny gel of water shield, okra, flying fish roe and pickled plum; and another, broad beans, shellfish, fuki (a Japanese rhubarb), and myouga (Japanese ginger), slathered in a milky white dressing of tofu and tai milt.

The gohan or rice dish consisted of grilled tai that was again presented to us before it was shredded into the rice, paired with a palate-cleansing cabbage soup (tome-wan) and Japanese pickles.

And then, in a delightful show of humility, chef Murata himself came to the door of our room and bowed to the ground, thanking us for partaking of his creations.

We bowed back in gratitude for his artistry, and he gamely posed for a picture with us, escorting us all the way to the door of the restaurant.

Traditional Japanese food, called washoku, has recently been registered as a Unesco Intangible Cultural Heritage. After experiencing chef Murata’s lovely early summer kaiseki, I now have a much deeper appreciation of food as an art form.