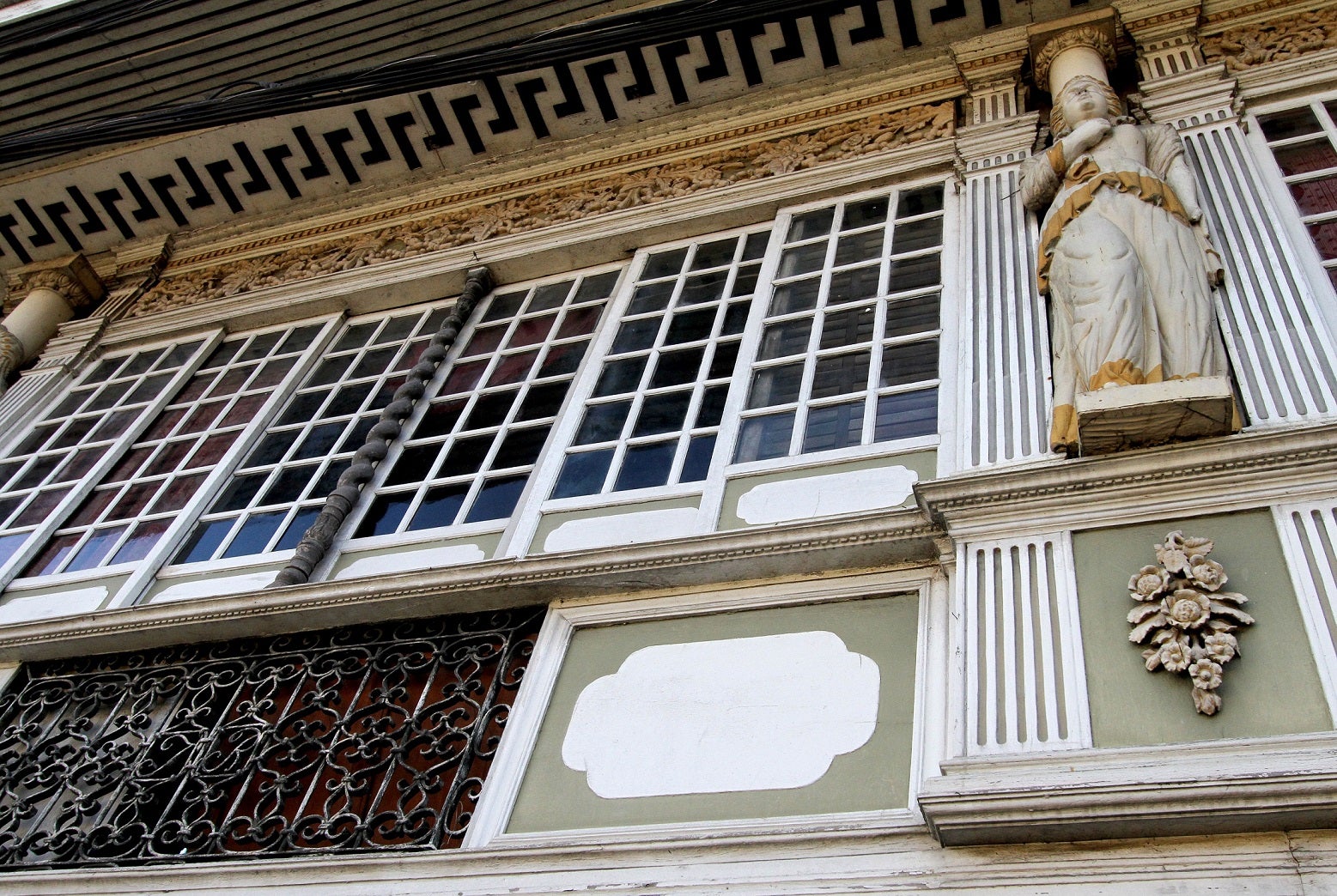 JOSE Bautista House, a blend of Neoclassic and French Art Nouveau, was once visited by national hero Jose Rizal. Note the cayatid. PHOTOS BY RICHARD A. REYES

MENTION of cultural heritage often brings to mind our colonial structures from the Spanish era to the American period, never mind if there’s such a thing as audiovisual heritage, heirloom cuisine or prehistoric engineering.

It’s because these structures are often monumental, concrete in the mind, present throughout the country, and have been there since time immemorial—so they’re the first to strike the imagination.

When we say “heritage structures” we usually think of our Hispanic built heritage, as in Vigan and Iloilo, but seldom our American colonial structures, as in Baguio. That could be why the Manila Jai Alai Building, an Art Deco jewel designed by American architect Welton Becket, was easily demolished and replaced with a “modern” monstrosity of a condominium high-rise.

We’re rich in heritage if we only look long and long. Balara Filters Park in Diliman has a cluster of Art Deco buildings from the Commonwealth era that’s more extensive (though not necessarily more beautiful) than that on the Far Eastern University campus in Manila.

Heritage structures are dotting the archipelago but seldom in clusters as most had long been razed to rubble by war, neglect or development.

Vigan is, of course, the premier location, declared a World Heritage Site in 1999 by the United Nations Educational, Scientific and Cultural Organization (Unesco). The specific site was where the town elite built their Hispanic houses, known as the Mestizo District, with its nerve center on Calle Crisologo.

A close rival would be the historic town center of Malolos, its heritage structures concentrated in Kamestisuhan District, with its nerve center on Pariancillo Street. It was declared a National Historical Landmark and a Heritage Town in 2001 by the National Historical Institute.

It should be noted that both heritage districts of Vigan and Malolos were enclaves of Chinese and Spanish mestizos, the former also called Kasanglayan (from Sangley, a person of pure Chinese ancestry); and the latter, Pariancillo (referring to the original Chinese quarters adjacent to Intramuros, now Arroceros Forest Park).

Naturally the architecture of most of their ancestral houses is a blend of Spanish and Chinese designs.

When Gen. Emilio Aguinaldo made the town the capital of the First Philippine Republic in 1898, he converted several houses near Malolos Church (now Cathedral) into government offices.

The Lino and Maria Reyes House, for instance, became the office of his chief adviser, Apolinario Mabini. The two were said to be “often heard arguing from this house.”

Casa Tribunal, which used to be the municipal hall, was turned into the carcel (jailhouse).

The most famous site here must be that of Instituto de Mujeres (School for Women), established by 21 young women who wanted to have a night school amid the opposition of the friars. It was to them José Rizal wrote from London his letter-essay “To the Young Women of Malolos.”

The school is long gone and a sprawling residence has taken its place. Only portions of the original stone wall remain. A historical marker has been installed at a side gate.

Most popular to tourists is the José Bautista House. This was visited by Rizal when he was recruiting members for the reformist organization La Liga Filipina. It was here where he and Marcelo H. del Pilar spoke to the 21 brave women.

“He came by the Dagupan train to Malolos,” says Dez Bautista, a descendant and founder of the Guild of Production Designers of the Philippines.

Bautista says the house was built before the 1850s and remodeled in 1877 with the addition of caryatids, resulting in a happy blend of the Neoclassic style and French Art Nouveau. It is probably the only house in the country with caryatids on its façade.

“At one time it became a school run by nuns,” says Bautista.

Some property owners practice adaptive reuse, but there seems to be no proper restoration guidelines as in Vigan. The Arcadio Ejercito House, which served as the Secretaría de Guerra (Department of War), is now a modern-day accesoria (residential building with commercial establishments on the ground floor).

An exemplar of adaptive reuse is the Adriano-Vasquez Mansion, site of the Gobierno Militar de la Plaza. It is now the city’s Meralco office but has retained its Art Nouveau original, with the gleaming hardwood, cast-iron filigree embellishment, stunning stained-glass panels.

Another lovely restoration is the Luis Santos House, built by the ophthalmologist son of Alberta Uitangcoy, one of the 21 women of Malolos. This Art Deco structure of off-white and powder-blue boasts works of two National Artists: Guillermo Tolentino’s sculptured fountain on the lawn; and Amorsolo’s ceiling mural in the salon.

Many of these old structures have no markers, so tourists and even locals can’t identify their historicity or cultural significance.

Says the tourism officer: “This would have been better than Vigan because it has history. But their owners won’t have them affiliated with the NHCP (National Historical Commission of the Philippines). There’s no government consultation when they remodel or renovate. Sayang.”

Bautista bristles at the suggestion, saying: “But this is our house. We live here. We come here during vacation.”

Outside Kamestisuhan District but within walking distance are more heritage structures that played bigger roles in history.

Casa Real, built in 1580, served as office-residence of the gobernadorcillo, then subsequently as Spanish treasury during the British invasion of Manila, American-era capitol, and now a national shrine and Museum of Political History.

While Barasoain Church was the site of the convention of the First Philippine Congress and the inauguration of Aguinaldo’s government, the convent of Malolos Church served as his Palacio Presidencia (official residence and office).

Six months after his inaugural, while escaping to San Fernando, Pampanga, he ordered Gen. Antonio Luna to burn church and convent down before the American soldiers arrived, as “part of his scorched-earth policy, so that anything left would be rendered useless.”

So now mention of what that famous huge silver altar looked like can only ignite our imagination.