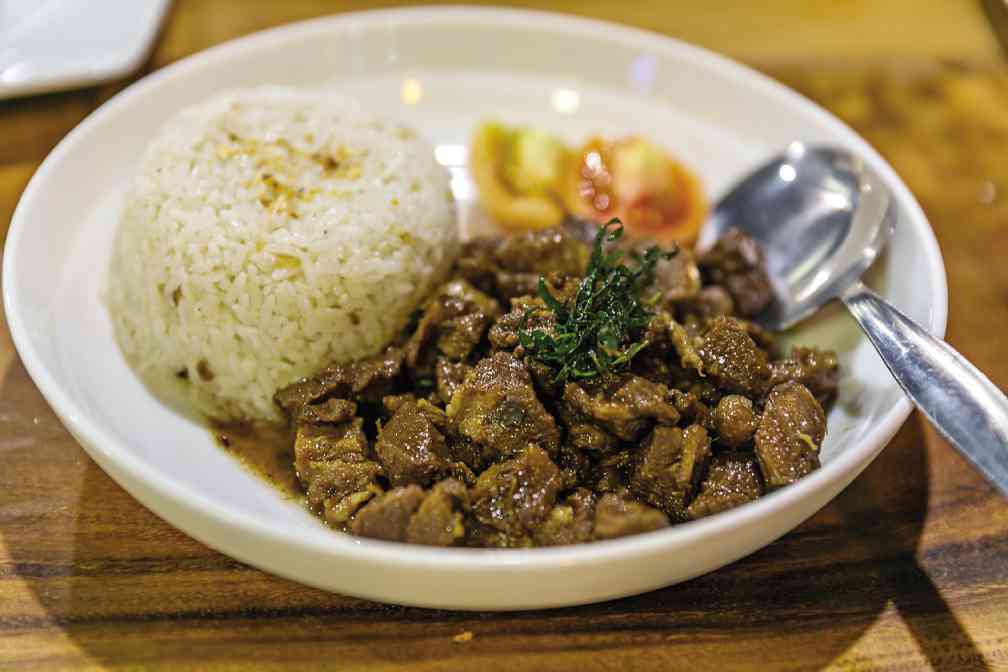 The stock had been cooked with pork and beef bones for several hours. To intensify its flavor,  ginamos, a block of fermented krill, had been dissolved and strained separately, and then infused into the broth to create an opaque richness.

From the batchoy bowl, a swirl of mist ascended from the surface, glossed by residues of animal collagen.

The hot hotchpotch of egg noodles, chewy pork and liver converged with tang of shrimp paste, and the crunch of spring onions, fried garlic and pork cracklings. The hint of sugar gave it the umami delight.

“I went to La Paz market in 2006 to ask how the batchoy is done,” said the US-trained Banusing. “It’s like making ramen; the broth has to be robust. The beef and pork bones are boiled for hours. That is the beauty of batchoy, it’s flavorful.”

Banusing studied at the Culinary Institute of America specializing in Italian cuisine. She opened Al Dente restaurant at Sarabia Manor, a popular Iloilo hotel which she owns. Another restaurant at Smallville Arcade, Freska, is known for its buffet and Ilonggo cuisine. She goes modern with The Brewery, which offers foam-topped draft beers in Mandurriao, and Farm to Table at Iloilo Business Park.

As a caterer, her biggest event was the Vin d’Honneur, the first Wine of Honor event held outside of Malacañang Palace last Independence Day. She also served at the opening cocktails and ministerial meetings in the Iloilo leg of the 2015 Asia-Pacific Economic Cooperation.

In the past decade, Banusing has been the go-to chef of hotels for Ilonggo cuisine in Manila.   This weekend, she will be watching over the batchoy and the Visayan stations at F1 Hotel’s Filipino food festival, “Luzviminda 4: Heirloom Recipes,” which also features Nancy Reyes Lumen and her Luzon recipes and Maria Kristina Collantes and her Mindanao dishes.

Banusing’s batchoy station will present the whole gamut of ingredients that make the dish a favorite comfort food. Her signature dish is kadyos, another Ilonggo comfort soup with chunky pork, pigeon peas or kadyos and jackfruit, soured with batwan seeds. The subtle tartness of the batwan makes the flavors unique to the Ilonggos.

On her heirloom recipes, she said, “The cooking is as straightforward as you can get.” The chicken binakol, or native chicken soup, is prepared with traditional ingredients of coconut water and lemongrass. The chicken inasal, another famous Ilonggo grilled dish, is marinated with tuba or rice wine, soy sauce, calamansi and lemongrass for eight hours.

Pinamalhan is a classic Ilonggo seafood recipe in which the fish is simmered with lots of ginger, tomatoes and onions. Banusing uses pink salmon for a sophisticated touch.

The crab cakes are made with blue crabs and shrimp paste while the fresh lumpia is egg roll with nothing but heart of palm with garlic.

All of Banusing’s recipes had hints of sugar. “The Visayas is known for its sugar culture,” she pointed out, although in Central Philippines, “the dishes are neither too sweet nor too sour or salty. The flavors are balanced.”