First for art, now for architecture–PH makes it back to back in Venice Biennale | Inquirer Lifestyle ❮ ❯ 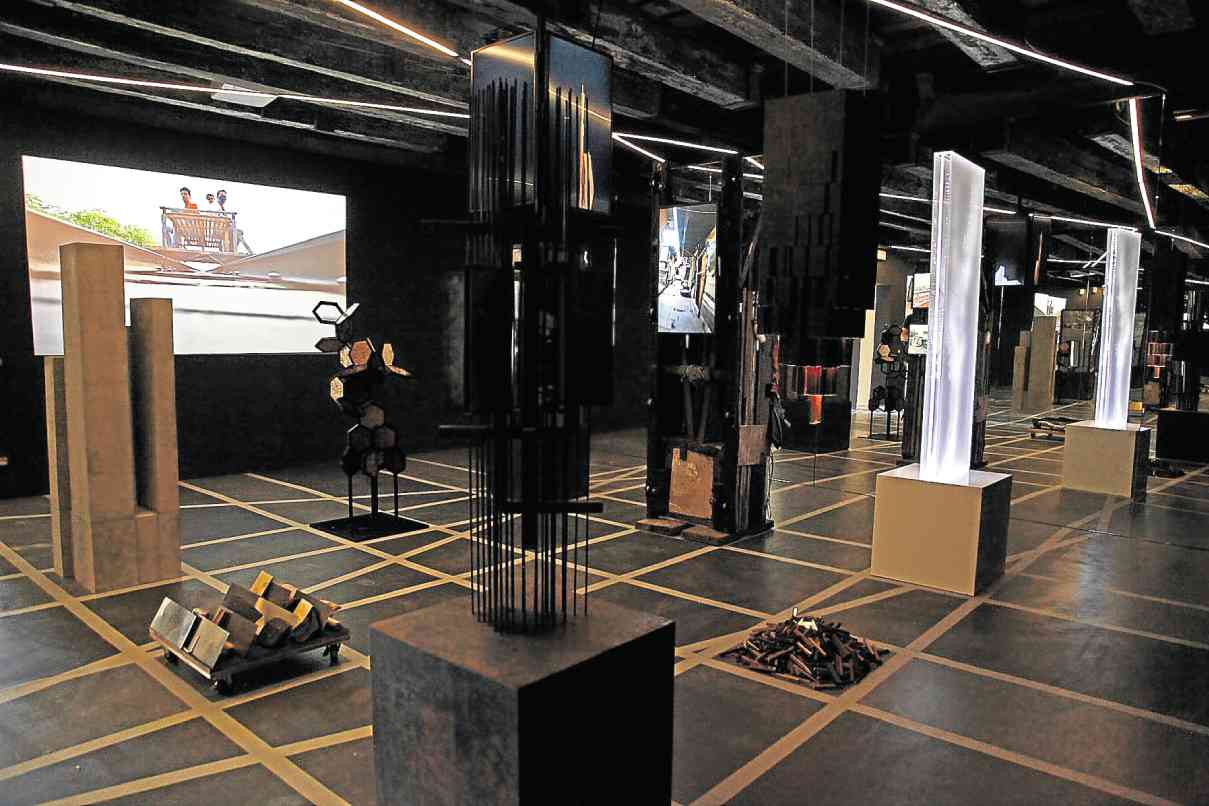 THE PHILIPPINE pavilion, titled “Muhon: Traces of an Adolescent City,” is divided into three rooms representing three time periods—History, Modernity and Conjecture, or the past, the present and what could be. Stylized sculptural presentations of “muhons” signifying nine chosen postwar landmarks and structures in Manila undergo changes from room to room, allowing visitors to reflect on their respective interpreters’ examination of the subject of Filipino identity and character as expressed through the evolution of built heritage.

First for art, now for architecture–PH makes it back to back in Venice Biennale

Barely six months after the Philippines had its closing ceremony for its historic return to the Venice Art Biennale in 2015 via a well-
received exhibit called “Tie a String Around the World,” the country was back in the Renaissance city this May to participate in the architecture component of the global art exhibition, the Venice Architecture Biennale.

“Tie a String Around the World,” curated by art critic and educator Patrick Flores, showcased four Filipino artists whose works were placed “in conversation” with each other—José Tence Ruiz and his steel-and-velvet installation “Shoal”; filmmaker Manny Montelibano and his video-and-sound piece “A Dashed State”; and Manuel Conde and Carlos Francisco’s restored vintage film “Genghis Khan,” which was shown to acclaim and cited for technical achievement in the 1952 Venice Film Festival.

The exhibit marked the reappearance of the Philippines in the international art expo after an absence of 51 years. The last time the country was represented in the Biennale was in 1964, with an exhibit of the works of Napoleon Abueva and José Joya, who would go on to become National Artists.

This time, the Philippines ups the ante with an exhibit on architecture, called “Muhon: Traces of an Adolescent City,” that features the works of nine Filipino entities—six architects or architectural firms plus three visual artists.

The exhibit, curated by the architectural firm Leandro V. Locsin Partners and which had its “vernissage” (soft opening) on May 27, is housed in the same satellite venue—Palazzo Mora, a 16th-century villa converted into an event space—that hosted “Tie a String Around the World.” And, as in that exhibit, the same government agencies and figures have collaborated to ensure that the Philippines sustains its presence in La Biennale di Venezia: the National Commission for Culture and the Arts, Department of Foreign Affairs, Department of Tourism and the Office of Sen. Loren Legarda.

It was Legarda who conceived of the project to return the Philippines to the Biennale, beginning in 2013 when she said she checked out the event that year and was aghast that countries like Tuvalu and Maldives were represented, but no Philippines, and so resolved to remedy that absence.

The importance of the international art expo is, in part, on account of its history; more than a century old, it traces its beginnings to 1895 when the first Biennale was held under the aegis of the then ruling House of Savoy. The architecture event, running on alternate years with the art confab, was established in 1980. 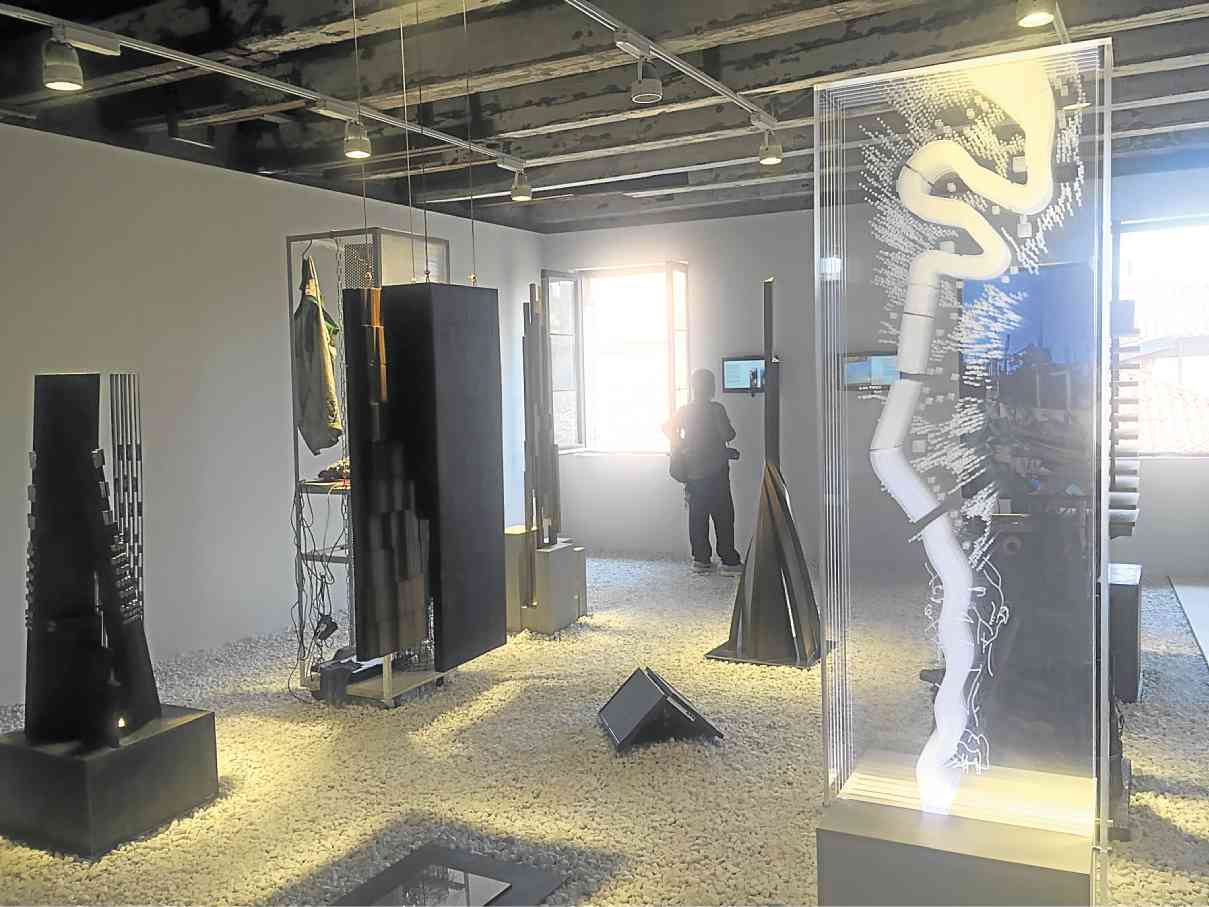 For the 15th Venice Architecture Biennale, “there are about 63 countries represented in this event; there’s no reason that the Philippines could not participate” especially after the country’s milestone comeback in the previous Biennale, said Legarda at the presentation of “Muhon” in Manila in early May.

“Our presence in the Biennale allows us to see that there’s a much bigger world out there that we are a part of. With ‘Muhon,’ we can participate in a global conversation about built heritage, and the importance of merging progress and development on one hand, and preserving our heritage on the other. It’s not one or the other—I
believe that’s the essence of what ‘Muhon’ is about, and we want the world to see that side of the Philippines.”

The 2016 Architecture Biennale’s theme is “Reporting from the Front”—“a sufficiently capacious label for every participant to apply their own reading of it,” said its curator (or “director,” the Biennale’s preferred term), renowned Chilean architect Alejandro Aravena. “‘Front’ can be taken as referring to war, to poverty, to legality, problems all of us can learn from… Which are the problems you consider most urgent?”

Wallpaper magazine’s coverage of the Architecture Biennale—it mentions the Philippine pavilion as among the Top 30 must-see events and exhibitions—shows the staggering diversity of concerns and issues presented by the participating countries.

Australia’s take on cultural identity is through “one of its greatest symbols, the swimming pool.” Japan looks to architectural solutions to address poverty and youth unemployment. The US pavilion presents 12 “speculative architectural proposals” on how to rejuvenate Detroit, the heart of the battered American auto industry.

The German pavilion talks about migration. Britain is all about “the future of housing.” Nigeria, like the Philippines a first-time participant in the Architecture Biennale, grapples with “the pressing need to rewrite history.”

For the Philippine entry, the curatorial team of Leandro Locsin Jr., Sudarshan Khadka Jr. and Juan Paolo dela Cruz of Leandro V. Locsin Partners homed in on the lingering question of Filipino grounding and identity and the country’s fragile anchor to its history, in part because of the pell-mell race to progress that has seen rapidly evolving urban centers—Manila in particular—lose much of their physical past.

But, to spread the work of exploring the theme, they invited other architects and artists to join in the work. In the end, nine seemingly random urban landmarks—all postwar and in Manila, for now—were identified by the chosen six architects and three artists as the “muhons” or markers serving as springboards for their reflections on the meaning of space and physical heritage, and how it all helps delineate—like an actual “muhon” does to a property—the Filipino character in a city restlessly in flux (hence, still “adolescent”).

The three artists, meanwhile, added grit to the mix with their own choices: Binondo for Mark Salvatus; KM 0 in Luneta, the starting point for all distances in the Philippines, for Poklong Anading; and Pandacan Bridge for Tad Ermitaño, who incorporated in his installation the “kariton” used by the urban poor living under and on the fringes of the bridge, to comment on how communities adapt to and find relevance in the infrastructure around them.

“These nine ‘muhons’ are but a few of the symbols of our built heritage in our midst that we often neglect but are likely part of our everyday living and of who we are,” said Legarda in a statement. “‘Muhon’ initiates a dialogue on the progress of our architecture and issues on preservation and conservation of our heritage.”

The Philippine pavilion divides the exhibit into three rooms representing three time periods—History, Modernity and Conjecture, or the past, the present and what could be. Stylized sculptural presentations of the chosen “muhons” undergo changes from room to room, allowing visitors to reflect on their respective interpreters’ examination of the subject.

CS Design Consultancy’s presentation of Pasig River, for instance, transforms from a pristine ribbon of white etched on layered acrylic glass panels in the History room, to a murky, chaotic version in the Modernity section, and finally back to a semblance of order and undulating beauty in the last room.

Video projections of architectural landmarks that have defined the Manila skyline through the decades also accompany the exhibit.

At the soft opening of the Biennale’s central exhibit space in the cavernous Arsenale (the other main venue is the Giardini parkland), Legarda was able to briefly talk with Aravena and to personally invite the Pritzker Prize-winning architect/activist to visit the Philippine pavilion, which runs May 28-Nov. 27 and is open to the public.

Next year, the Philippine pavilion in the Art Biennale—for which the search for curatorial proposals is now open—will decamp from Palazzo Mora and debut at the Arsenale itself, marking yet another high point in the Philippines’ reentry into the world’s preeminent contemporary art and culture gathering.

For details on the open call for curatorial proposals for Venice Art Biennale 2017, visit www.philartvenicebiennale.com, or e-mail [email protected] 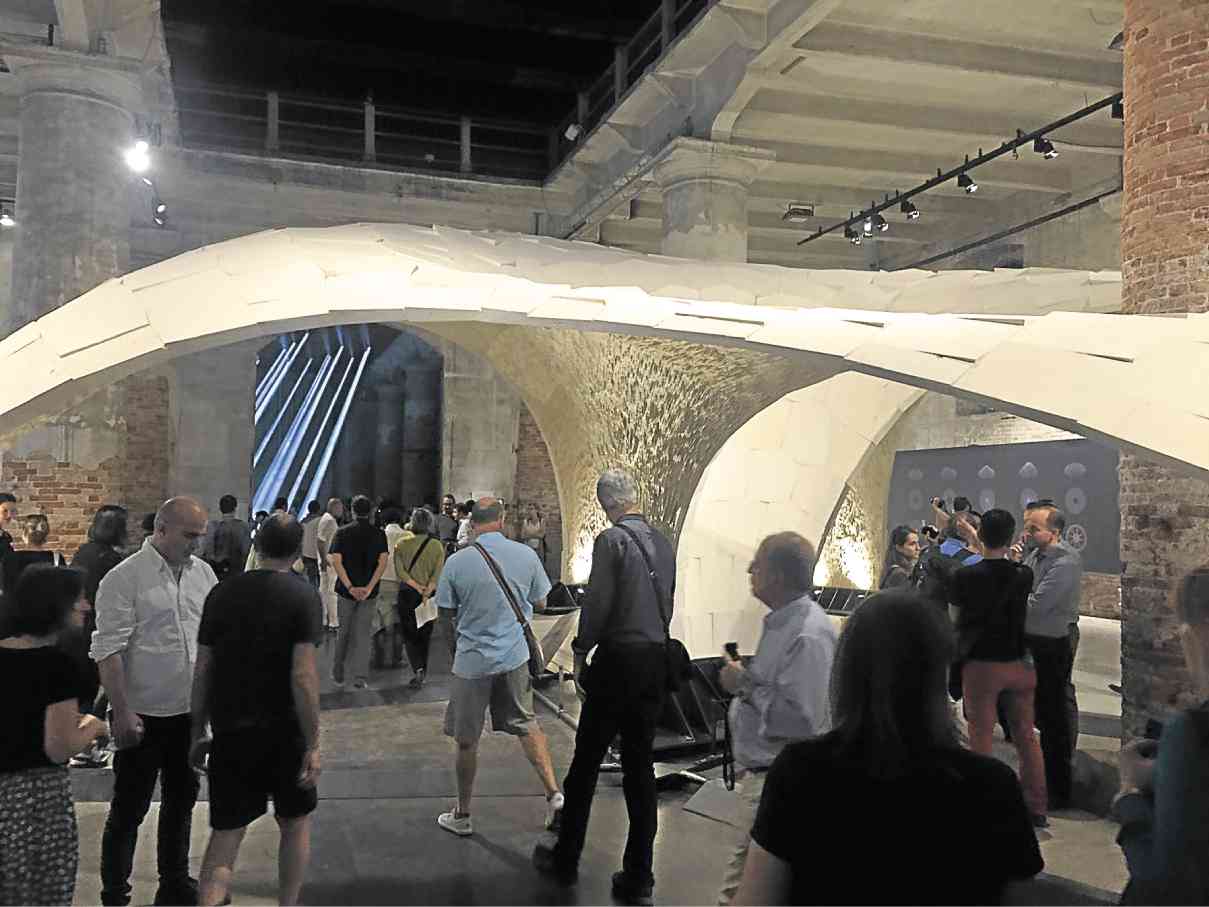 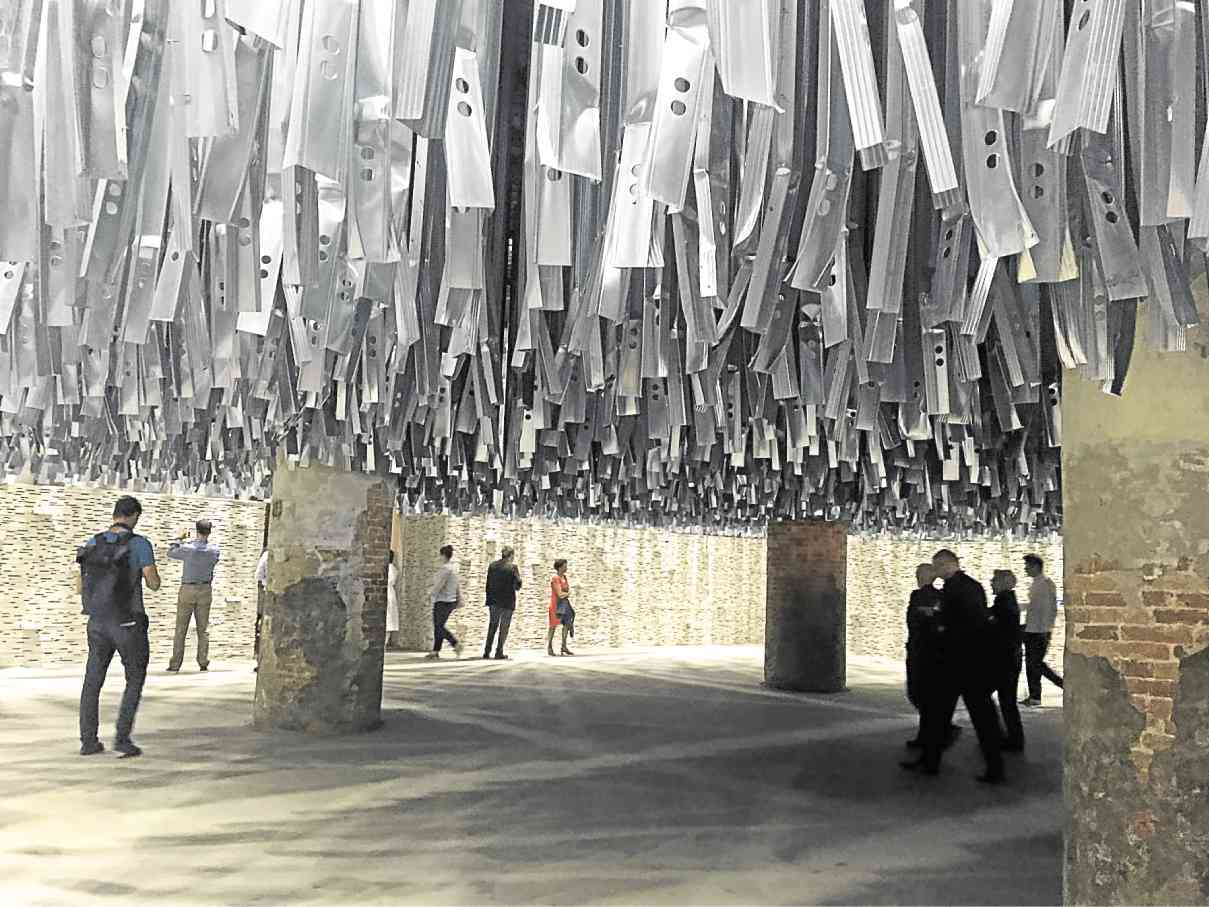