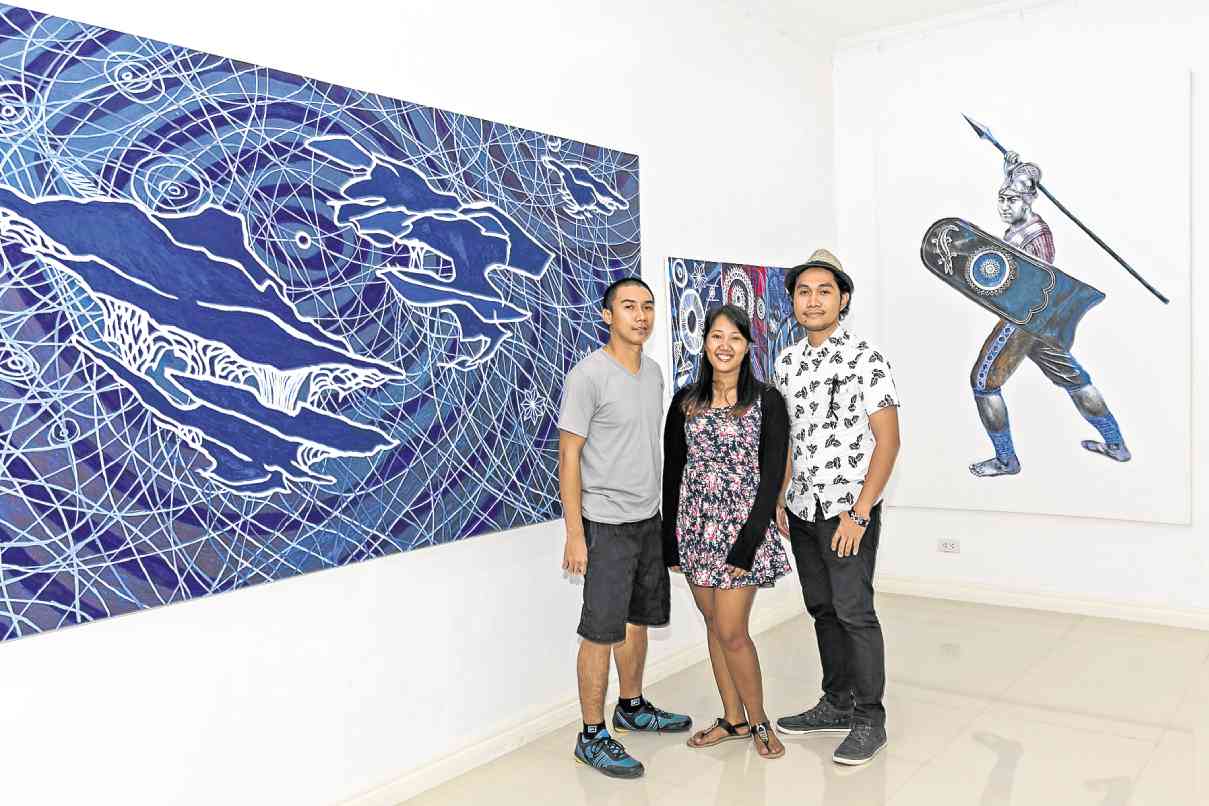 LIBY Norman Limoso, Allun May Gansa and Kris Brasileño, president of Iloilo Visual Artists Collective, pose in front of Limoso’s abstraction of the MiddleWorld and a hero from “Hinilawod.” PHOTOS BY PJ ENRIQUEZ

THE ILOILO visual-arts scene has become exuberant with the rise of galleries and new artists.

At Casa Real, the country’s first gallery run by a cooperative, Liby Norman Limoso continues his exploration of preserving the indigenous culture of Panay island.

One mural depicts an important setting in “Hinilawod,” the Middle World of the skies as characterized by multiple layers of blue, sinuous lines and geometric figures that demonstrate cosmic energy.

In many of the paintings, animistic patterns derive from the geometric, decorative motifs of indigenous fabrics.

Mythological characters such as Labaw Dunggon (Man of Steel), his first wife Matan-Ayun, his brother Humadapnon (Man of Gold), Nagmalitong Yawa (The Golden Woman), seven-headed snakes, the Moon, Sun, the Crab and the Lion are evocatively interpreted in bold primary colors and rich details.

Newcomer Bryan Liao bravely ventures into Conceptual Art. In “Aggregate Abundances” at Cinematheque Iloilo, he digs into the concept of prosperity as a result of accumulation. He has created eight hexagons —eight being the symbol of finance and power, according to numerology—from Douglas fir rectangle chips.

The stacks of chips not only produce a three-dimensional effect but also suggest abundance. They create a honeycomb effect, inspired by the biblical verse about the promised land flowing with milk and honey.

Each hexagon is differentiated by the play of the wood’s grains, broken pieces, and infusions of contrasting materials such as glass and resin. Light and shadow are interpreted by the play of burned chips against gilded ones.

Liao adds that his works also symbolize the state of human relationships—broken, burned, mixed up or gilded.

“I’m not into selling right now. I just want to share this medium,” he says.