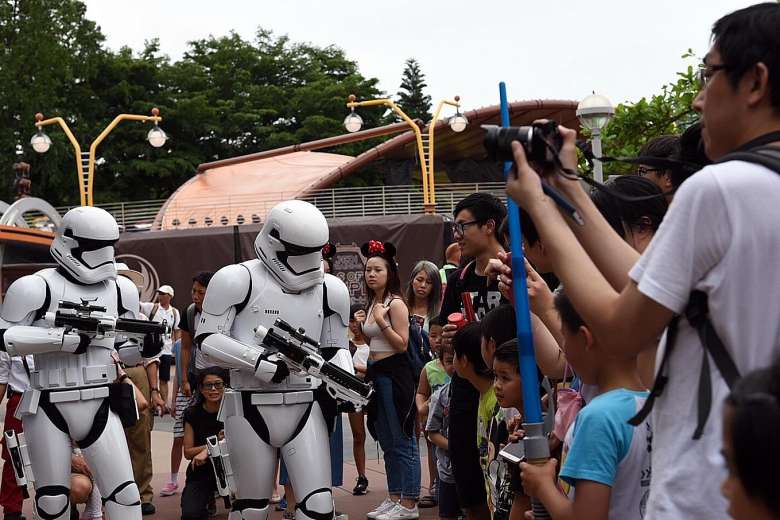 Hong Kong Disneyland will have to do more with the opening of Shanghai Disneyland, which is three times bigger. Last week, the Hong Kong theme park opened its Star Wars-themed attraction to woo more visitors. The Straits Times/ANN/JOYCE LIM

HK Disneyland tries to retain its charm as Shanghai beckons

Better service and shorter queueing time are some of the reasons mainland Chinese tourists gave for visiting Hong Kong Disneyland, even though a much bigger one has opened back home.

Many of them said they did not want to “squeeze in the crowd” or queue for hours to get into the attractions at Shanghai Disneyland, which was officially opened last Thursday.

The US$5.5 billion theme park, which took five years to build, is three times bigger than the one in Hong Kong.

“As it’s newly opened and with so many people flocking to it, I don’t expect the service to be good,” Ms Jenny Zhao told The Sunday Times.

The 35-year-old tourist from Tianjin city said she spent US$4,563 on a four-day trip specially to take her six-year-old son to visit Disneyland.

Despite its continued appeal to mainland Chinese tourists, however, analysts say the Hong Kong theme park could face a further hit with the opening of Shanghai Disneyland, after suffering a 23 percent slump in mainland visitors last year.

Highly dependent on mainland tourists, the park, which is 53 percent owned by the government, reported a loss of US$19million last year and had to lay off staff earlier this year.

“The next two years will be very challenging,” its former managing director Andrew Kam had told reporters in February this year before his sudden resignation the following month.

Joseph Tung, executive director of the Travel Industry Council which regulates travel agents in Hong Kong, said: “Disney has to think of something to differentiate itself from what Shanghai is offering.”

Tung and other industry observers say it is time that Hong Kong’s tourism industry began its soul-searching on how to get its groove back.

For a start, while the city’s theme parks cannot compete with those in Shanghai in terms of size, it can build on its competitive edge over China in terms of service.

“Hong Kong people have to be more polite and upgrade their services, so that visitors from the mainland will feel they are welcome in Hong Kong,” said Tung.

As one of the key pillars of the city’s economy, tourism accounts for 13 percent of total employment in Hong Kong and contributes to 5 per cent of its gross domestic product (GDP). The government has allocated US$30 million to give the industry a boost.

Hong Kong’s Secretary for Commerce and Economic Development Gregory So told reporters at a travel event on Thursday that the city will be holding more events and festivals to appeal to a different mix of tourists. New hotel attractions will also be built at Disneyland and Ocean Park, a marine life theme park.

By upgrading its tourism infrastructure, Hong Kong would be able to attract tourists from sources other than mainland China in the long run, said OCBC Bank economist Tommy Xie.

However, in the short term, it would be difficult for the industry to regain traction given the stronger Hong Kong dollar, he added.

Instead of building another Disneyland or adding another cross- region bridge, tourism analyst Jennifer So of China Securities International said that “we should diversify our tourism offerings such as organising community-based travelling.”

Disney brings its brand to Shanghai with new theme park