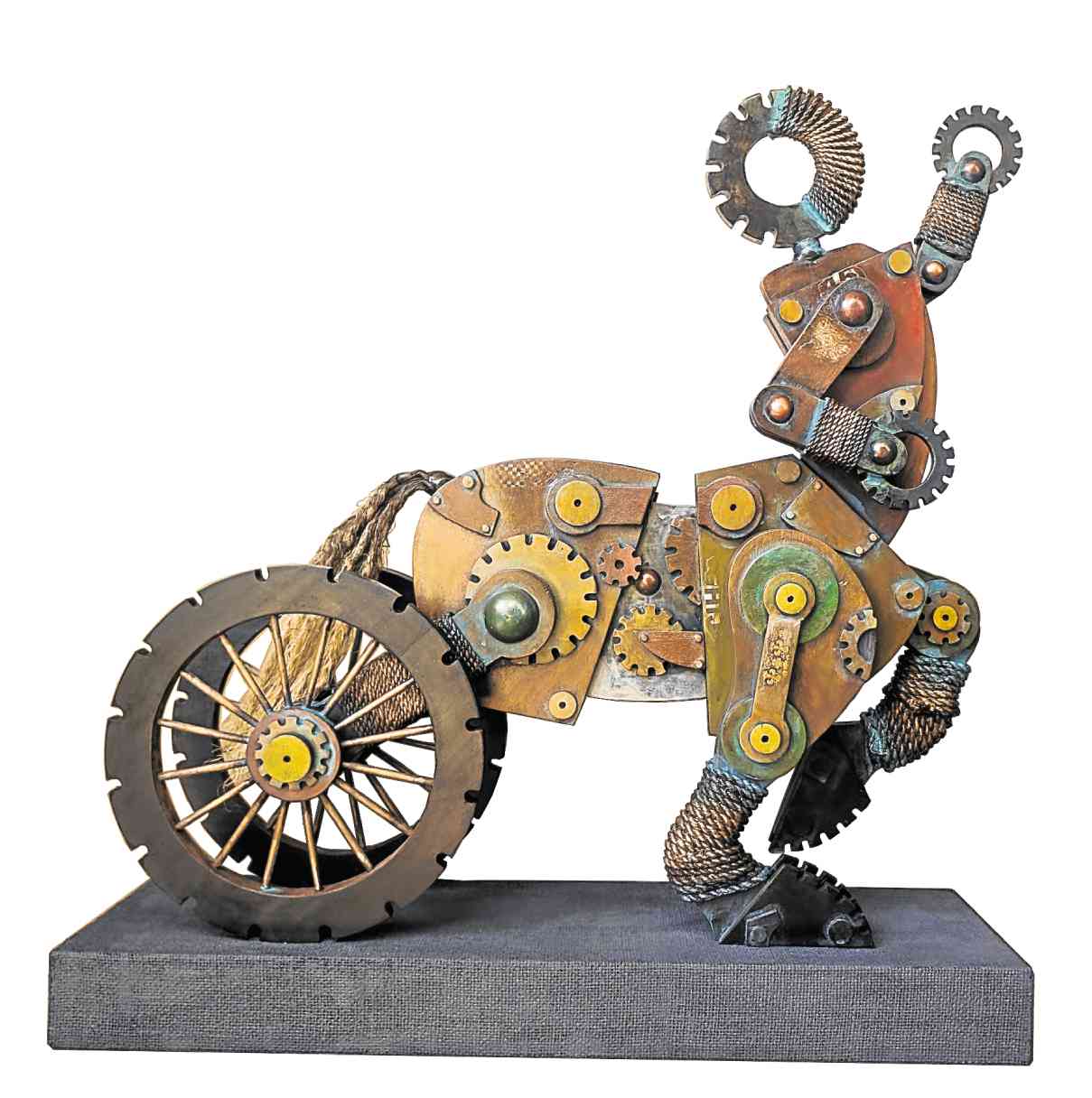 Omi Reyes and his template of time

ONE LOOKS at these new works and wonders why, in one exhibition, Omi Reyes’ works were included in a steampunk show. In an art scene mad for the trendiness of what’s hot and what’s not, steampunk art may be the current rage, but it’s not where Reyes’ work should have been caged.

His current show at Shangri-La Plaza East Wing, which will then transfer for an extended run at Artes Orientes Gallery, bears the title “About Time” and certainly bears watching.

How do we then assess Reyes’ works that, undeniably and obviously, make use of the cog-and-wheel as a dominating presence in all his works, yet seem to demur being labeled as such?

One may as well start with where all art begins: with its material. While steampunk art makes use of recycled scrap such as metal, copper, brass and steel, Reyes’ materials are made of hand-wrought wood, and though they come in different sizes, have an inflexible design throughout, a kind of mass-produced seriality imbued with elemental simplicity. Indeed, one can even divest them of their machine-inspired origin, and still regard them as pure, unadulterated form, like the discs, say, of the French Orphist artist Robert Delaunay or, closer to home, the circular forms of the late Pacita Abad.

What Reyes’ works do not partake of is the quality of grisliness in many steampunk metal works, affecting a spine-chilling grandeur and, in the process, transforming themselves into menacing presences.

Reyes’ sensibility does emanate from something more genteel and refined, as evidenced by the sense of order and harmony in his composition, almost Luz-like, in their disciplined design. The stun of rivets, nuts and bolts, which are the only actual metallic parts, are deployed with almost mathematical exactitude. To be sure, there are no helter-skelter improvisations, and thus, not surprisingly, Reyes has adapted the clock, with its determinedly ticking regularity as an engine of time in itself, the supreme example of a working machine.

That the clock is an indicator of time, with its irrecoverable past and its impending future, is just about what Reyes’ works may have any relation to steampunk. And the case should rest there.

One finds, in many of these works, allusions to classical art or, rather, artworks that, in time, have become classic. The most obvious reference is to Salvador Dali’s famous “Persistence of Time,” better known to the public as “The Melting Clocks.” As one of the icons of Surrealism, the painting is one of the most recognizable art pieces in the world.

The engine propelling Reyes’ works, however, is a mellower species of Surrealism, laced with mirth and irony, affection even, as in his “Persistent Steed.”

Still pursuing the theme of time, Reyes turns the notion of time as a succession of hours on its head. In two works titled “Playful Time,” he disarranges the sequence of numbers as man has been accustomed to. It looks like a crazed clock, time running after itself, not unlike a dog catching its tail, which is obviously an impossible conundrum.

These works have visual halations of Jasper Johns, who once printed the stenciled spelled letters of one color (say, red) and then painted it over with another (green, for instance), thus effectively disrupting conventional expectations of how we see things.

In still another instance, Rene Magritte, the Belgian Surrealist, painted a tobacco pipe and underneath wrote in script, “This is not a pipe.”

In Reyes’ case, the sheer jumbling of cut-out wooden numbers instantly demolishes the template of time.

And just as we decide it’s time to leave the gallery, we are greeted by a pair of works titled “Cyborgs.” Hello, what’s going on here?

Cyborg, which is short for “cybernetic organism,” is, simply, a human that has been fitted with technology to enhance his biological capabilities, as in a man with an artificial cardiac pacemaker.

Reyes’ “cyborgs,” with their eyes fitted with cog-and-wheel, stare blankly at the viewer, a virtual man-machine, surely a staple of science fiction; but of one thing we are sure: These cyborgs are determined not to be lassoed into steampunk territory.