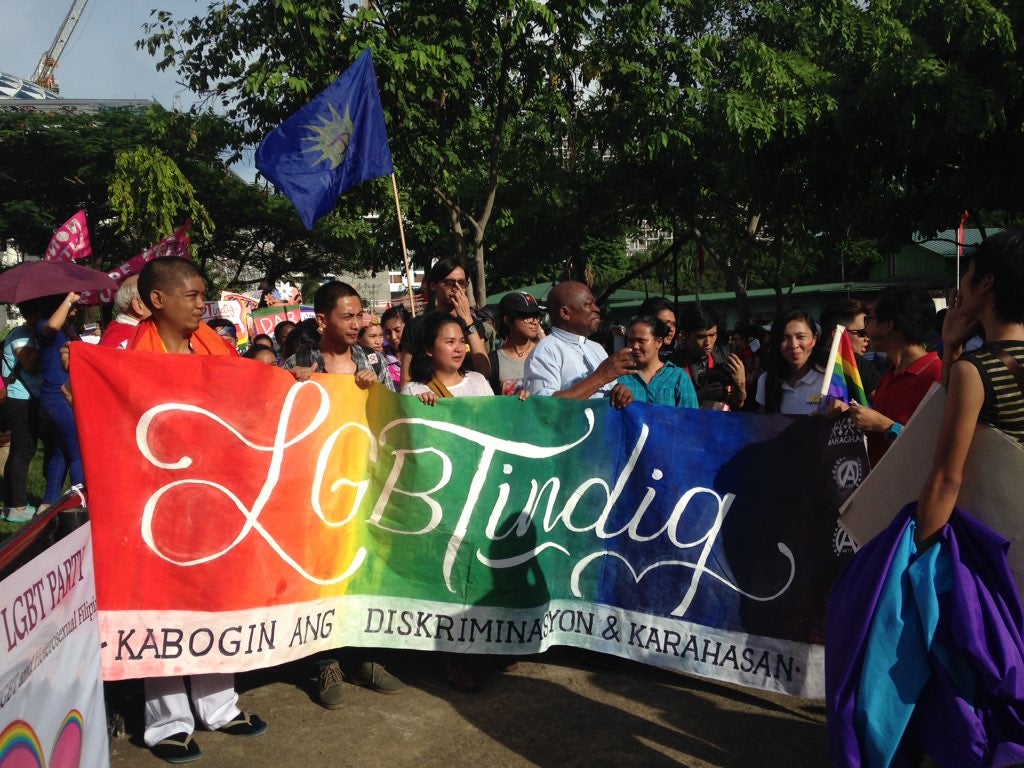 LGBT groups participate in the 2016 Pride March to call for the recognition of their rights. MEG ADONIS/INQUIRER.net

First-time and veteran participants alike of the Metro Manila Pride March 2016 at Rizal Park said that the event is their way of showing people that they “exist.”

“The main point of this [event] is solidarity. Solidarity equals strength in numbers equals ‘hey! we’re here, we exist and we don’t have time for your views about us’,” exclaimed attendee “Joosh,” who withheld his name to keep his privacy.

His companions “Macky” and “Megan” (also not their real names), clad in rainbow accessories, said that society tends to degrade the LGBTQA+ (lesbians, gays, bisexuals, transgender, queer, all) community into “unreal” stereotypes.

“You have to show [other people] that you exist instead of letting [them] create stereotypes about you,” Megan quipped.

Members, families and supporters of the LGBTQA+ community proudly painted Rizal Park with all the colors of the rainbow in celebration of the 22nd anniversary of the Metro Manila Pride March Saturday afternoon.

Strolling at the park in his “Alice in Wonderland” Mad Hatter costume, first-time participant Amadeus explained that this annual event is important in showing society that they are not different from everyone else.

“If you will look at us right now, we come from different backgrounds; we are like other people. We have our own taste [and] we don’t even have to agree on something,” he said.

Amadeus urged all the members of the LGBTQA+ community to be confident despite their being “different.”

“This diversity that we have is the reason why it somehow makes people appreciate [the fact] that we don’t really need to change ourselves. Being different is okay,” Amadeus explained.

As a veteran participant of the Pride March, on the other hand, 67-year-old retired Institute of Women’s Studies teacher Arche Ligo asserted that there is “strength in numbers,” especially when society sees that being in the LGBTQA+ community is okay.

“The people do not fear the LGBTQA+; they fear the fact that they can become one and they would not forgive themselves for it. […] It is not a disease that you can catch; it is a decision that people make—to be who and what they want to be,” she said. Meg Adonis/IDL

LGBT community comes out for love