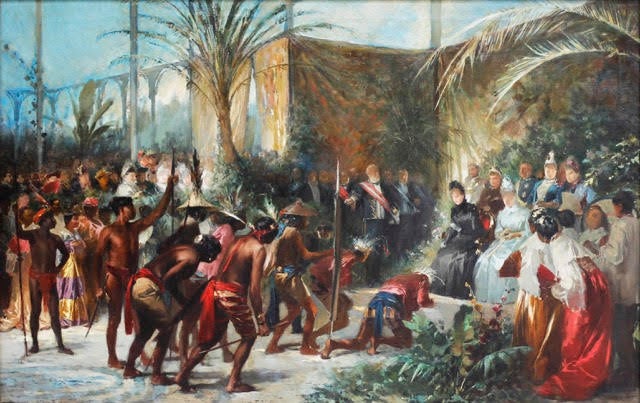 WHEN it was mounted last February by León Gallery, “Alfonso Ossorio: Afflictions of Glory” was already seen as the biggest art event of 2016. But León may have outdone that with “Filipinos in the Gilded Age,” its new exhibit of late-19th-century paintings, sacred sculptures and furniture, including heretofore locally unviewed works by Luna and Hidalgo, displaying Philippine achievements in fine arts and design before the American invasion.

So formidable are the artworks that curating is shared by the formidable troika of Ramon Villegas, Lizza Guerrero Nakpil and Liliane “Tats” Manahan.

Manahan additionally tackles the interior requirements of the important exhibit by recreating Juan Luna’s atelier in Paris. “León Gallery has taken this thrust of converting the exhibition space into an immersive environment to enhance the ‘feel’ for the paintings,” she explained.

However, perhaps the most fascinating item in the exhibit is by an unidentified painter—“Habitantes Indigenos ante de la Reina Regente en la Exposicion General de las Yslas Filipinas de Madrid, 1887”—showing non-Christian indigenous Filipinos being presented to the Queen Regent during the controversial Philippine international expo in Madrid in 1887.

But that’s getting ahead of the story.

The paintings that dominate the exhibit are mainly “repatriated” art, as Nakpil put it.

Gallery owner Jaime Ponce de León explained that the “paintings and ivory were owned by Europeans, not Filipinos. The furniture came from old Filipino families.”

“The paintings and ivory came from the private collections of gentlemen in Spain and France,” he added.

Repatriation owes to volatile market forces that have unsettled the so-called Old World, resulting for example in the 2008 meltdown whose effects continue to bedevil the globe, as shown by the British vote to exit from the European Union over the weekend.

“As a result of what can be called a ‘reversal of fortunes,’ call it happy economic happenstance,” said Ponce de León. “Filipinos are now in the position to bring home the many treasures that were originally commissioned by Europeans.”

“There is no better reason than that,” the León Gallery owner stressed to explain the new trend of “repatriated art.”

Still, it takes expert research to determine which art to be repatriated.

“The discovery or uncovering of all these various pieces have been the product of several years’ travel, detective work, even casual, unintended conversations that have led to these treasures,” explained Ponce de León.

In his essay for the exhibit “The Last Word,” Ponce de León cites “The Butterfly Effect” (the theory that “the gentle flap of a butterfly wing can change the air around it and cause a tornado halfway around the world”) as having aided him in his “voyage of discovery.”

For example, marooned in Europe for several days because an “obscure volcano” in Iceland had erupted and released particles in the atmosphere so as to ground flights of 10 million people in 2010, the León proprietor writes he was led to a “stunning” Filipino painting of an interior scene.

In Brussels later on, casual conversations with shopkeepers around the ancient Sablon district led him to a chic address that locals said belonged “to a certain Fabian de la Rosa.” He found the address and immediately spotted a beautiful painting there by the Filipino master belonging to the descendant of a Belgian diplomat assigned to Manila before the war.

For the work of recovery, Villegas credited the León owner’s intrepidity—as well as the Internet.

“The Internet enabled us to learn so much about the 19th century so quickly,” said Villegas. “It was a matter of knowing which thread to pick up and follow. It’s the same with modern travel which has permitted certain people, Jaime just being the youngest and most intrepid, to access and reacquire Philippine art from our former colonizers.”

Ponce de León said his dogged discovery and recovery of Philippine art was inspired by other, more senior collectors.

“These collectors paved the way for our appreciation and understanding today of Philippine history and art,” Ponce de León added.

Visitors to “Filipinos in the Gilded Age” will be greeted by the fascinating unsigned painting “Indigenous Inhabitants Before the Queen Regent at the General Exposition of the Philippines Islands, Madrid, 1887.”

In his essay on the painting, Villegas writes that the painting is “perhaps a study for a larger work.” He adds that the “unidentified painter had surely been there, for he captures the moment,” even depicting “the young lowland Christian girls in trajes de mestizas, dressed with sheer embroidered fabric on the upper half of their bodies, and voluminous bright-red skirts.”

The girls seem to be gaping at their fellow but non-Christian Filipinos from what we now call as cultural communities or indigenous people as the latter pay obeisance to the Queen Regent Maria Cristina. The elders are shown wearing G-strings but over their short pants, apparently so as not to scandalize polite Madrid society.

But curiously at the back of the group are two young Ifugao warriors who seem to stand defiantly in their loincloths sans shorts. According to Villegas “they remain erect”—proudly standing and “not really into bowing down” to the Spanish royal.

The Madrid Expo was largely a defensive move on the part of Spain to ward off other European powers from grabbing her possessions amid the sudden rush for colonies in the 19th century (e.g. the “Scramble for Africa”).

The exposition was designed to show the Philippines as an example of enlightened colonization by Spain, the better for other colonial wannabes to stop making excuses of “manifest destiny” and “bringing liberty to the captives” to mask their naked imperial ambitions.

Made to exhibit their works in the fine arts section of the expo were Luna and Hidalgo, who had won first-class gold and silver medals in the 1883 National Fine Arts Exposition.

Just two years before the Madrid exposition, Spain had nearly lost the Carolines and Palau island in the Pacific to Germany and was able to maintain them only through papal arbitration.

These were the same islands that Governor-General Primo de Rivera put under Philippine dependency in 1881 and, having fostered relative stability and progress for the Philippines, resigned his position in 1883, but not after approving the scholarship of the young Filipino artist named Juan Luna y Novicio for his studies in Rome.

The scholarship carried with it an annual emolument of P1,000, Luna’s only obligation being he had to finish two paintings for the Manila ayuntamiento.

As it turned out, the ayuntamiento provided scholarships of P600 to promising students to study in Europe but with the obligation of finishing four paintings for the government. This should show that the fine arts was much prized in the colony.

Contrary to ultranationalist histories, the Philippines toward the end of the 19th century was a progressive country amid a backward Asia being overrun by colonists.

Manila was considered a center of culture and progress in the continent. It was linked to Europe by a direct monthly maritime service and by four indirect lines through Hong Kong. There were weekly vessels between Manila and Hong Kong. Volume of exports and imports was some P50 million annually.

Manila had a European-style higher education institution, the University of Santo Tomas, which enjoyed all the rights and privileges of similar universities in Spain and Europe. The Philippines likewise had three secondary schools; five professional schools; five conciliar seminaries; four schools of superior studies; 30 public schools in Manila alone.

There were also an academy of painting and drawing, a navy school, several training schools for soldiers and social workers.

There were 10 normal schools for girls (including the still-existing Santa Isabel, Concordia, La Consolacion, Santa Catalina, Santa Rosa) and a school for midwives (under UST’s medicine faculty).

The hospital and social welfare system was vastly superior to North America’s, as later discovered by the American invaders themselves.

‘Barbarians at the gate’

In the exhibit notes, it is pointed out it would be “an insult to our ancestors” that Philippine civilizational achievements “occurred only upon the instigation and imposition of colonial masters.”

After all, Filipinos were likewise “fired by the Habsburg imagination” and “admired the beauty of the Baroque and the Rococo.” They likewise “made tangible the persons of Jesus and Mary” through their churches and shrines and “comprehended the ideas of the Greco-Roman world.”

Filipinos might have been able to grasp the same cosmological notions and achieve the same civilizational successes, but Spain refused to grant them the political rights enjoyed by Europeans and continued to treat them as a colony. Radical nationalists have since hit back and written off Hispano-Catholic and European heritage and, along with that, the achievements of Luna, Hidalgo and the hijos de pais.

León Gallery’s new exhibit rues how modern Filipinos have thrown the baby out with the bathwater. It laments that because of their rabid nationalism, Filipino identity and heritage have been jettisoned. Result is the loss of the Filipino soul.

That is why “Filipinos in the Gilded Age” is specifically addressed to the millennials. “Because taste is not automatically passed on at birth,” said Villegas. “The next generation has to be taught how to be couth and cultured.”

But: “The fact that the task now falls on our shoulders does not mean we are better or more learned. My dears, we are simply older!”

Villegas laughed: “Is it too much to say, ‘Man the gates! The barbarians are upon us!’”

“Filipinos in the Gilded Age” is running at León Gallery, G/F, Corinthian Plaza, 120 Paseo de Roxas, Legaspi Village, Makati, till July 20, Monday-Saturday, 11 a.m.-6 p.m. Visitors are advised to arrange for an appointment so that a curator can be present by calling 8562781.