Meanwhile, in 1898, our forefathers in Malolos had French menu | Inquirer Lifestyle 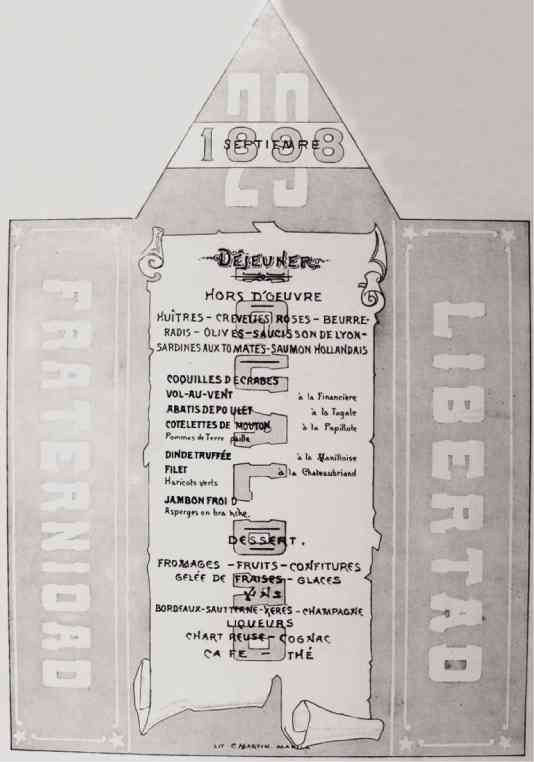 Meanwhile, in 1898, our forefathers in Malolos had French menu

Change is coming indeed. We will have two inaugurations instead of a joint one this year. In a clear break from tradition, protocol and post-election healing, our President has opted to take his oath at Malacañang, while the Vice President takes hers in the Quezon City Reception House or Executive House in New Manila, Quezon City.

We are informed that the food to be served in both inaugurations will be simple fare, unlike the fiesta food of previous inaugurations.

Merienda, rather than a full lunch or dinner spread, will make a bold statement on simplicity or austerity in government, although some people wish that the President and Vice President would push the envelope further and put some regional specialties on the menu: inihaw na panga and durian from Davao; Bicol Express, laing, and pili nut from Bicol would surely be welcome.

It is unfortunate that the menu for the

inauguration of the First Republic in Malolos is now lost, but we do have the menus for the lunch and dinner served on Sept. 28, 1898, when the Malolos Congress ratified the declaration of Philippine Independence made from the window of Emilio Aguinaldo’s Kawit home on June 12, 1898, the milestone that gifted the nation with the flag and anthem we hold dear today.

The Malolos luncheon we know from a photograph of the menu in “Harper’s History of the War in the Philippines” (1900), the dinner we know from an original menu, the only copy in the universe, preserved in the Museum of Xavier University in Cagayan de Oro.

From these menus we can presume that the reception for the inauguration of the Malolos Republic could not have been far behind. The menu was not in Spanish, not even in Tagalog, but in French, the former language of diplomacy.

On that hot day the Founding Fathers partook of a succession of seven appetizers: Oysters, Shrimp, Buttered Radish, Olives, Lyon Sausages, Sardines in Tomato Sauce and Salmon with Hollandaise Sauce.

While the French menu looks very impressive, the Coquille de Crabes was probably what they knew as torta de cangrejo, which to us is tortang alimango/alimasag; the Abatis de Poulet a la Tagale could have been nothing but  adobo under a fancy name; the Dinde Truffee a la  Manilloise, just another relleno or perhaps a turkey galantina.

Why didn’t they complete the set and serve seven desserts rather than five: a selection of cheeses, fruits, jam, strawberry jelly and ice cream the flavor of which they failed to specify.

This wonderful meal of seven appetizers, seven courses and four deserts was washed down with four wines progressing from  Bordeaux, Sauterne, Champagne, and Sherry to  two liqueurs —Chartreuse and Cognac.

Of the above the Sauterne is not common today, the same with Chartreuse, an awful green drink with a monastic history that tastes like expired cough syrup.

Finally, to end all great meals, a choice between coffee or tea.

From contemporary newspaper accounts we have the seating arrangement and the number of silverware, but are left in the dark regarding the food.

What kind of cheese was served? Was it the salty hard type known to us as queso de bola that could withstand the long sea voyage from Europe to the Philippines?

All the wines, cheeses and other European staples were available in Manila specialty shops. Beef and lamb were imported from Australia.

Were most of the ingredients fresh—as in, freshly scooped out of a can?

How do you explain the ice cream? Ice was not readily available in Manila until the Americans established the Insular Ice Plant in the 1900s.

Ice for this meal was imported from the United States, cut out in huge blocks from Wenham Lake near Boston and shipped all the way to India, with Manila as a stopover for refueling. Was this how ice was supplied or did they make ice using chemicals?

Nick Joaquin declared that the Malolos menu should stand alongside  the Malolos Constitution as expression of the emergence of nation.

Others who disagree point out that this was an elaborate meal laid out by the pretentious weasel Pedro Paterno.

The simple Filipino fare that will be served at the inaugurations at Malacañang and the Quezon City Guest House should not be seen as inferior, but rather as proof that in 1898, we had to have a French menu to show the world that the Filipinos were civilized and capable of governing themselves.

In 2016 we are a free and independent nation with a culture and food all our own comparable with any cuisine in the world.