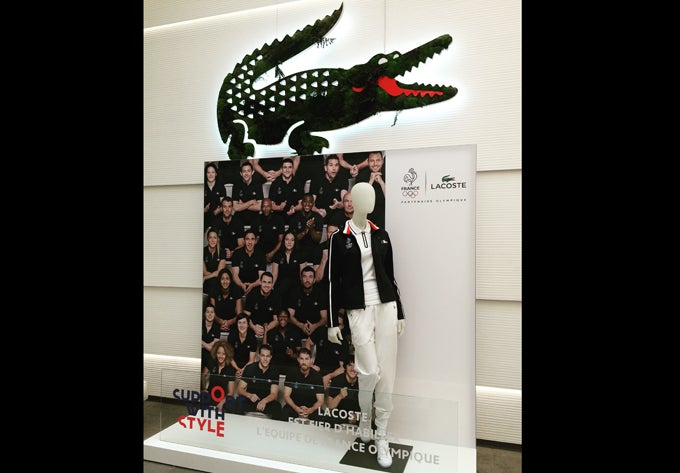 To own a polo shirt with that distinct crocodile logo—the preppy weekend uniform du jour of CEOs—somewhat symbolizes that you have arrived.

Lacoste is one of the most recognized brands here, its polo shirt one of the most aspired-for pieces of fashion luxury—relatively affordable but definitely not cheap at upward of P4,000 apiece.

Lacoste, brought in by Rustan’s in the early 1970s before it became part of Stores Specialists Inc.’s portfolio, is so big here that the Philippines has become the benchmark of the brand’s Southeast Asia markets, according to Lacoste marketing and communications director Michelle Cheung.

“We did our research in the Philippines, we talked to some customers, and we were so impressed with how familiar they are with the brand, and their buying habits,” Cheung said during a recent Paris press trip for Asian journalists.

Their global research revealed, however, that many of their customers—including some French—didn’t know that Lacoste was a French brand. “They thought it was American,” she said, likely because Lacoste licensed its polo shirts to a United States-based company for many years, beginning in 1951 until the mid-1990s.

Therefore, since then the brand has made rigorous efforts to underscore its “Made in France” heritage.

This move may seem ironic, especially as the family that founded the brand sold Lacoste in 2012 to a Swiss family-held company called Maus Freres. A widely reported dispute over management among the heirs of founder René Lacoste led to the sale.

“Our shareholder may be headquartered in Geneva, but the fact remains that collections are entirely created by our brand’s design studio in Paris and some of it still manufactured in our historical site in the French city of Troyes, to leverage our French savoir-faire,” Jean-Louis Delamarre, Lacoste CEO for Asia Pacific, told Inquirer Lifestyle.

“Over and above that, Lacoste’s identity is deeply rooted in its French origin and history. Its unique heritage—that of René Lacoste—conveys a certain idea of French elegance and savoir-faire. We are proud of our French origin, and I think it is the cornerstone of Lacoste’s lifestyle.”

On the press trip, our group was brought to Troyes (pronounced trwa) in northeast France, less than three hours away from Paris, to visit the factory of Devanlay, the longtime textile licensee of Lacoste. It’s here where the first petit piqué polo shirts were made when the brand was founded in 1933.

(Since 2012, Devanlay and Lacoste have been integrated as one company, Delamarre explained of the once rather complex setup of Lacoste. “Lacoste Operations is now in charge of the brand, the textile production and the distribution in most countries. For our remaining licenses, we rely on historical partners to manufacture other products, such as P&G for perfumes or Pentland for footwear.”)

While Lacoste’s apparel manufacturing is outsourced in other factories in Asia, the Americas and other parts of France and Europe, it’s still in Troyes where select styles and collections, including a special line called “Made In France,” and the runway collections are made.

About 600 workers are employed in this factory, with an assembly line that includes the knitting of the yarns for the signature petit piqué polo shirts. (Trivia: It takes 15 hours, from knitting to final check, to make one polo shirt. A single size-5 classic L1212 shirt uses 23 km of yarn.)

“Our French factory has historical quality manufacturing techniques, which allow us to develop more complex materials or styles,” said Delamarre. “Our French production site is an inventiveness laboratory.”

He added, “Lacoste has always been very consistent over its 80-plus years of existence. In the recent past, under the new leadership, the efforts have been ongoing to sustain innovation and quality to premiumize the brand and always offer a better experience to its valued customers all over the world.”

Lacoste is positioned as premium casual wear, with an increasing emphasis on its Sport performance line in Asia, already popular in Europe and the US.

“When I was playing, Lacoste was typically white polos and they were heavy,” he said.

“It’s good Lacoste makes new clothes now, like slim-fit [that dry fast], because that was a problem. I remember playing in the ’80s, it was so hot! When we changed the shirt it weighed like 2 kg with the sweat! It’s good that brands like Lacoste did well to improve that.”

These new improvements on Lacoste apparel are aligned with the brand’s history.

René Lacoste was a tennis champion in the 1920s, a tenacious player that earned him the moniker “The Alligator.”

The Roland Garros stadium where the French Open tournament is held every year, from late May to early June, was built in 1928 to host the Davis Cup, following the victory of Lacoste and his team in New York City the previous year.

Lacoste has been a Roland Garros official sponsor since 1971, and has its own premium lounge at Court No. 1. It dresses not only top players but also line judges and referees.

René Lacoste was, however, not only an athlete; he was also an inventor, credited for designing the first tennis-ball-throwing machine in 1927. He also created the first steel racket in 1963, and owns the patent for the racket’s famous anti-vibration dampener.

His biggest legacy is surely the short-sleeved polo shirt made of petit piqué jersey, a breathable fabric never before seen, that gave him better freedom of movement on the court. The shirt known today as the L1212 gave birth to the concept of functional elegance.

In 1933, Lacoste partnered with a man named Andre Gillier, owner of a hosiery factory in Troyes specializing in mesh materials, to produce the polo shirts. It sported the crocodile logo.

Lacoste would be the first brand to sport a logo outside of a garment.

Today the brand has diversified to include fragrances, footwear, eyewear, watches and leather goods, the latter a sizeable segment for the Philippine market as female shoppers have been lapping up the handbags, said Cheung.

While well-positioned to take advantage of the pervasive “athleisure” trend, Lacoste hasn’t approached the market from that standpoint, Delamarre said.

“Lacoste has always been sport-inspired. Sports—tennis and golf in particular—is part of our DNA. For us it is not about a trend, it is the core of our lifestyle… As a tennis champion, René Lacoste wanted clothes that enable motion and were comfortable, and were elegant at the same time. Since then, Lacoste has been proposing products and materials that convey a refined yet relaxed attitude. Lacoste is, above all, a lifestyle brand, and although we are very popular for our famous polo, we are not only a polo brand,” he said.

“From a communication standpoint, we have also harmonized our messages so that each category can support and maximize our ‘Life is a beautiful sport’ core campaign,” he added.

While Lacoste’s customers are affluent Filipinos and the emerging middle class, Delamarre said that the current Lacoste market has evolved and is not necessarily categorized under a certain socio-economic standing, but one that corresponds to the brand’s lifestyle proposition.

“In the Philippines, Lacoste has built a fantastic equity over the years. As a result, the brand is relevant to a very wide part of the population,” he said.

“Originally more men-focused, our brand now offers a wide variety of products for women and kids… Lacoste lifestyle is suitable for everyone who shares our values: joie de vivre, authenticity, modernity, and elegant in any situation.”