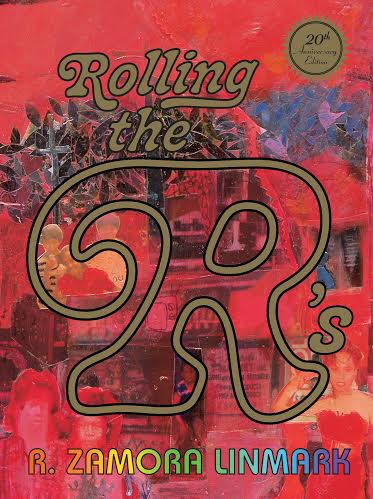 20th-anniversary edition of “Rolling the R’s”

IN 1993, a queer boy named Edgar Ramirez was born along with his classmates, Vicente de los Reyes, Katrina Cruz and Florante Sanchez. They were conceived by the literary mind of writer R. Zamora Linmark, who gave them a home in his first novel, “Rolling the R’s.” Published in 1996 by Kaya Press, the novel is set in the late 1970s, during the height of the disco era, and tells the stories of Filipinos residing in the diasporic community of Kalihi, a vibrant working-class district in Honolulu.

Linmark and Kaya Press will be celebrating the 20th anniversary of this poignant, postmodern novel this year with a publication of a handsome new edition, including an afterword by the author.

Linmark, who was born in Manila but grew up in Honolulu, wrote the novel when he was a graduate student at the University of Hawaii. In a recent interview with US National Public Radio, he said he wrote it as his “passport” out of graduate school. The novel came into fruition when eight vignettes were accepted for publication in Jessica Hagedorn’s groundbreaking Asian-American anthology, “Charlie Chan is Dead.”

The novel garnered an unexpected amount of acclaim from the literary community and the academe both in the US and the Philippines.

It also depicts Filipinos’ proclivity for inventing new words or their wordplay, as well as Linmark’s love for fragments. And it is in its fragmentation that “Rolling the R’s” finds its wholeness.

Linmark pirouettes and flies away from the traditional novel genre by complicating it with issues of class struggle, race, assimilation, education suppression and sexuality. The kids, for example, plunge into American (and, sometimes, Filipino) pop culture to situate themselves in their community of Asian and Pacific Islanders, both immigrants and Hawaii-born-and-raised.

At school, they are forced to take classes to “fix” the way they speak English. For Florante, Vicente and other immigrants, it is never to roll their R’s; for Edgar, Trina and locals, it is to never speak Pidgin-

The 20th-anniversary edition of “Rolling the R’s” includes an essay, “The Birth of the R’s,” narrating how the writer sat down one day intending to write a political novel set in the Philippines in 1991, but ended up writing about Hawaii during the last days of disco.

Edgar was Edgar because Linmark wanted to write a coming-of-age and coming-out novel that went against conventional bildungsroman. “Edgar didn’t have a closet,” Linmark said. “The moment he sensed that he was different, he recognized it and embraced himself. The more I explored his character, the more I realized I was creating my own version of Lolita. Nabokov has his Lolita; I have my Edgar.”

Because Kaya was a small press, Linmark did not expect success and fame. However, the unanticipated success, he acknowledges, was due to the fact that Kaya worked hard promoting the novel. The novelist recalled: “They sent me on a coast-to-coast book tour. And because ‘Rolling’ was unlike any book at the time, and set in a place that was far from the paradise of ‘Hawaii Five-O,’ it attracted all sorts of readers.” The novel eventually became required reading in literature, theater, gender and cultural studies in universities across the US. This year, it is being taught in high schools for the first time.

Linmark is grateful to the many scholars “who taught and continue to teach the book.” It survived the average shelf life despite the fact that it never won prizes and was not reviewed by major papers in the US. “It didn’t make me rich or famous, but what the success of ‘Rolling’ did, which, I think, is more important than fame or wealth, is that it raised the bar for my next novel. This is why it took me 12 years to write ‘Leche,’ and I’m very happy with it.”

To celebrate the 20th anniversary of “Rolling the R’s,” the Institute for Heritage, Culture and the Arts of the Philippine Women’s University (PWU) will hold a roundtable discussion on the novel.