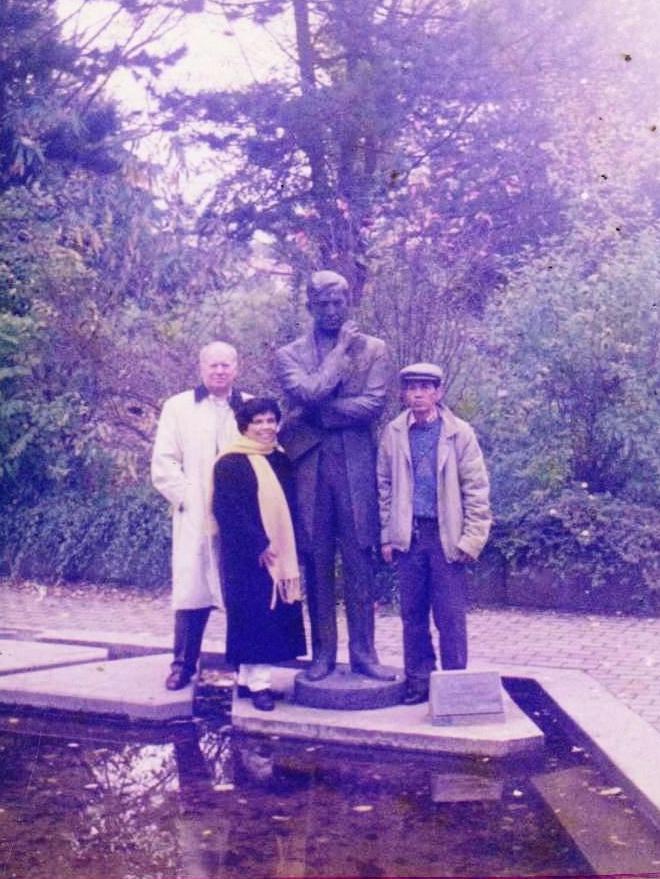 LAST June 19, the people of Heidelberg and Wilhelmsfeld, led by the local chapter of the Knights of Rizal, the Rizalistas in Germany, government officials as well as the Filipino community, once again flocked to this quaint medieval town to celebrate José Rizal’s 155th birth anniversary with a wreath-laying ceremony at the Rizal Monument.

Rizal’s birthday is a yearly celebration of the story of friendship between Germany and the Philippines.

My long journey to retrace Rizal’s footsteps in romantic Heidelberg ended in the scenic German town of Wilhelmsfeld.

We traveled through 12 kilometers, a 30-minute ride by car, leading to the forest village up in the hills of Odenwald filled with a pristine forest of ancient trees.

Wilhelmsfeld is fondly called “little   Baguio” because of the pine forest and 12 km of narrow zigzag roads going to the village, sometimes “Noli Village” because it was in this idyllic setting that Rizal finished writing the last chapters of his first novel in 1886.

The three-story century-old stone house of Pastor Karl Ullmer where Rizal stayed as a guest for three months and where he celebrated his 25th birthday has remained incredible, the same as in Rizal’s time.

The genial caretaker who toured our group showed us a picture of a drinking fountain in Ullmer’s rectory where Rizal used to drink after regularly commuting to and from Heidelberg in the 12-km stretch, which took him three hours walking the beautiful forest when he lived in their small village in 1886.

This priceless fountain was in Wilhelmsfeld until the German government donated it to the Philippines, where it was installed at Rizal Park on Dec. 30, 1964.

This priceless fountain is the only authentic relic at Rizal Park.

“The Rizal fountain is not a memorial as the other monuments are in Rizal Park. It’s a living monument.

“It’s the real fountain where our National Hero drank from, where his fingerprints were embedded in it’s water spout, where his fingers traced the scalloped designs and floral patterns by its base, and where his spiritual aura still lingers.”

The residence of Pastor Ullmer is a treasure trove of Rizal memorabilia consisting of an extensive and priceless collection of original letters, sketches, postcards, newspaper pages with articles about Rizal by Pastor Ullmer, etc.

It was reported that in March 1960, Fritz and Hans, two great-grandsons of Pastor Ullmer, came to Manila and donated the Ullmer Rizaliana collections and other relics to the José Rizal National Centennial Commission during the time of President Carlos P. Garcia.

Some of these collections of original Rizal memorabilia are now kept at the National Library, where they were displayed for public viewing during an exhibit to commemorate the 150th birth anniversary of our National Hero in 2011.

Among Rizal’s accomplishments in Wilhelmsfeld as mentioned by Nick Joaquin in his book “Rizal in Saga” “was the learning of tolerance—tolerance as a quality of civilized people used to free speech and worship.”

Pastor Ullmer, the Protestant pastor of Odenwald from 1878 to 1888, the Catholic priest Fr. Heinrich Bardot, a regular visitor of Ullmer from a   neighboring town, and Rizal would meet and discuss in very friendly and rational manner “views concerning moral values of people and the influence of their respective faiths on their lives.”

Rizal wrote about his almost daily meetings with the Protestant pastor and the Catholic priest in the solitude of Odenwald that took place during the long summer twilights of 1886.

The exchanges and open discussions on issues of different theological beliefs among Pastor Ullmer, Father Bardot and Rizal were “a shining example of this spirit of brotherhood and mutual respect for the faith of the other.” They imbued Rizal with religious tolerance.

Back in Heidelberg and before departing for Berlin, Rizal wrote a touching letter to Pastor Ullmer and his family in Wilhelmsfeld dated June 25, 1896.

“I thank you very much once more. You may also receive, when you were abroad, the same treatment and friendship as I have found among you; and if being a foreigner, I can do something for you in a foreign country; I can be of some service to you in my homeland, and where you will always find a good friend, if I do not die of course. The joy of being understood by other people is so great that one cannot easily forget it. You understood me too, in spite of my brown skin, which to many people is yellow, as if that were puzzling or absurd.”

Rizal might have stayed in Heidelberg and Wilhelmsfeld for a brief period of time, but the impact he has made on the locals with his “courage, generosity and brotherhood, moral and intellectual advancement of his people” has survived up to this day.

Rizal’s spiritual aura still lingers for decades in this romantic city made famous through his nostalgic poem “A Las Flores de Heidelberg,” written on April 22, 1886.

Through the years, Heidelberg has never failed to observe the commemoration of Rizal’s birthday, a testament that they have long considered the Filipino patriot one of their own despite the difference of culture, nationality and religion, and the vast distance that separates them.

Ramon M. Roda is a retired professor of Spanish and Rizal at the College of Commerce and Business Administration of University of Santo Tomas. He’s a recipient of two study-travel grants from the Spanish government for postgraduate studies in Madrid and Santander.