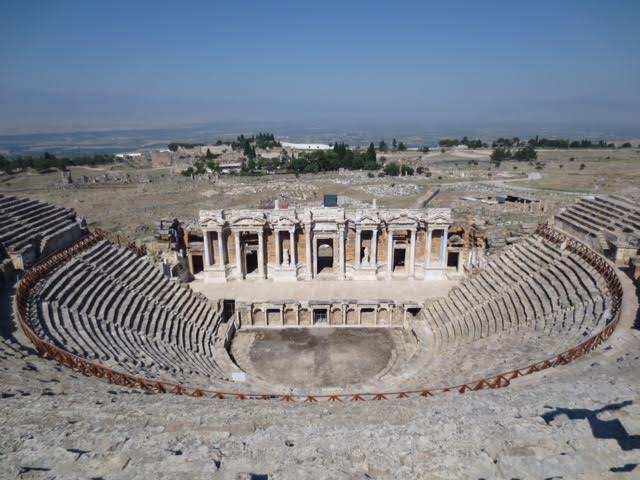 Turkey beyond the terrorist tragedy

THE TERRORIST attack June 28 at the Ataturk International Airport in Istanbul that killed 41 people and wounded at least 239 people has cast the spotlight, albeit tragically, on Turkey.

But while Turkey is a major power and an ancient civilization, it has been largely unknown to Filipinos.

Turkey was a land I had heard of but never quite knew. Back in high school, I learned about the poet Homer and the Trojan War in literature classes. In studying the New Testament in Catholic school, I remembered hearing about Saint Paul and his famous letter to the Ephesians. In history class, I learned about great empires such as those by the Romans and the Byzantines. What I did not learn was that Turkey was the stage for all these events.

I did not know enough about this ancient land which was why I eagerly jumped at the chance to learn more upon the invitation of Turkish heritage tour specialist Stella Maris and her local partner Jeron Travel.

From Manila, it was a smooth and comfortable 11-hour flight via Turkish Airways to Istanbul’s Ataturk Airport where we immediately set about to explore the country’s cultural capital.

Masterpieces of these historical epochs are thankfully within one compact (walkable) area in the heart of the old city. Our introduction began in an open plaza where Istanbul’s ancient Hippodrome used to stand when it was the capital of the Byzantium or the Eastern Roman Empire during the third century AD.

The horse-racing tracks are long gone now but still standing are various obelisks including an 18-meter, 200-ton war booty carted away from Egypt in the third century AD.

The Byzantium and Ottoman were empires anchored on two the great faiths, Christianity and Islam, and this is clearly manifested in Istanbul’s two greatest landmarks, the Hagia Sophia (Church of Wisdom) and the Sultanahmet, more popularly known as the Blue Mosque.

The former was built in the sixth century and was considered be the largest church in its day when Constantinople (today’s Istanbul) was known as “the Second Rome.”

Over at the Topkapi Palace, we marveled at the luxurious lifestyle of the ruling sultans amid gilded halls and imperial collections.

At the Suleymaniye Mosque, we admired the soaring domes and grand interiors, made more brilliant by the vivid colors of Iznik tiles. This is a masterpiece of the most famous of Ottoman architects, Mimar Sinan.

An architectural curiosity outside the regular tourist route (something which I had to purposely hunt down) was the Church of Saint Stephen for the Bulgarian Orthodox community.

An hour’s flight from Istanbul took us to Turkey’s Aegean coast to Izmir, Turkey’s third largest city and the birthplace of Homer.

A short drive took us the ruins of the Hellenistic city Pergamum. As with the Greek capital Athens, the ancient city was situated on top of a plateau, thus the term “Acropolis” which commanded majestic views of the plains of Bergama.

Pergamum’s importance lies mainly in its being mentioned in the Bible’s last chapter, the Book of Revelations, as the site of the one the seven churches of Asia Minor.

Still on the Biblical trail, we ventured to the ancient city of Ephesus, one Turkey’s greatest archeological sites.

At the height of the Roman empire, this was provincial capital of Asia Minor, the land where much of modern Turkey comprises of today.

The city was famed for being the site of the Temple of Artemis, cited as one of the Seven Wonders of the Ancient World.

Capping the Christian biblical trail, our group headed a few kilometers out of Ephesus to Mount Koressos to make a pilgrimage to the last house believed to be where the Virgin Mary lived prior to her assumption to heaven.

It is estimated that Turkey has around 2,800 archaeological sites of which 60 percent is still underground; they come not just in form of ancient towns or biblical sites but includes fascinating digs such as the Roman resort town of Hierapolis.

Dominated by its massive 2,000-year-old theater, this ancient site also echoes a biblical footnote as the site where the Christian saint Philip was martyred in 80 AD.

But the true highlight of Hierapolis lies adjacent to the ruins, one that the Turks refer to as the “white castle” or Pamukkale. This is natural wonder of terraced travertine stones shaped by a continuous flow of turquoise-colored water.

Pamukkale is easily one of Turkey’s most iconic sites. It drew the ancient Romans with its beauty and therapeutic properties and still draws modern 21st-century tourists.

The final leg of our journey took us to the region of Cappadocia, the name which means “land of beautiful horses.” Today, Cappadocia is less known for steeds but more for her surreal rock and cave formations.

In the town of Goreme, we marveled at the splendidly naif Byzantine-era paintings from cave-hewn Christian churches and monasteries. Most of these date back to the third century when persecution to the faith was rampant.

Stopping by Konya, we learned about the Silk Route within the walls of a caravanserai or a 13th-century motel for the traders of that time.

Over at Kaymakli, we meandered through tight pockets and tunnels exploring the fascinating cave houses built 3,000 years ago by the ancient Hittites which, up until recently, was still lived in by the local community.

Our Turkish experience was an introduction to her age-old myths and legends. This is a land whose epic stories are silently narrated by her monuments and ruins and whose heritage is as deep that as its ancient foundations. That is something that I would definitely want to dig up more on our next visit to Turkey.