What you do once you reach the top: The world according to George Yang | Lifestyle.INQ ❮ ❯ 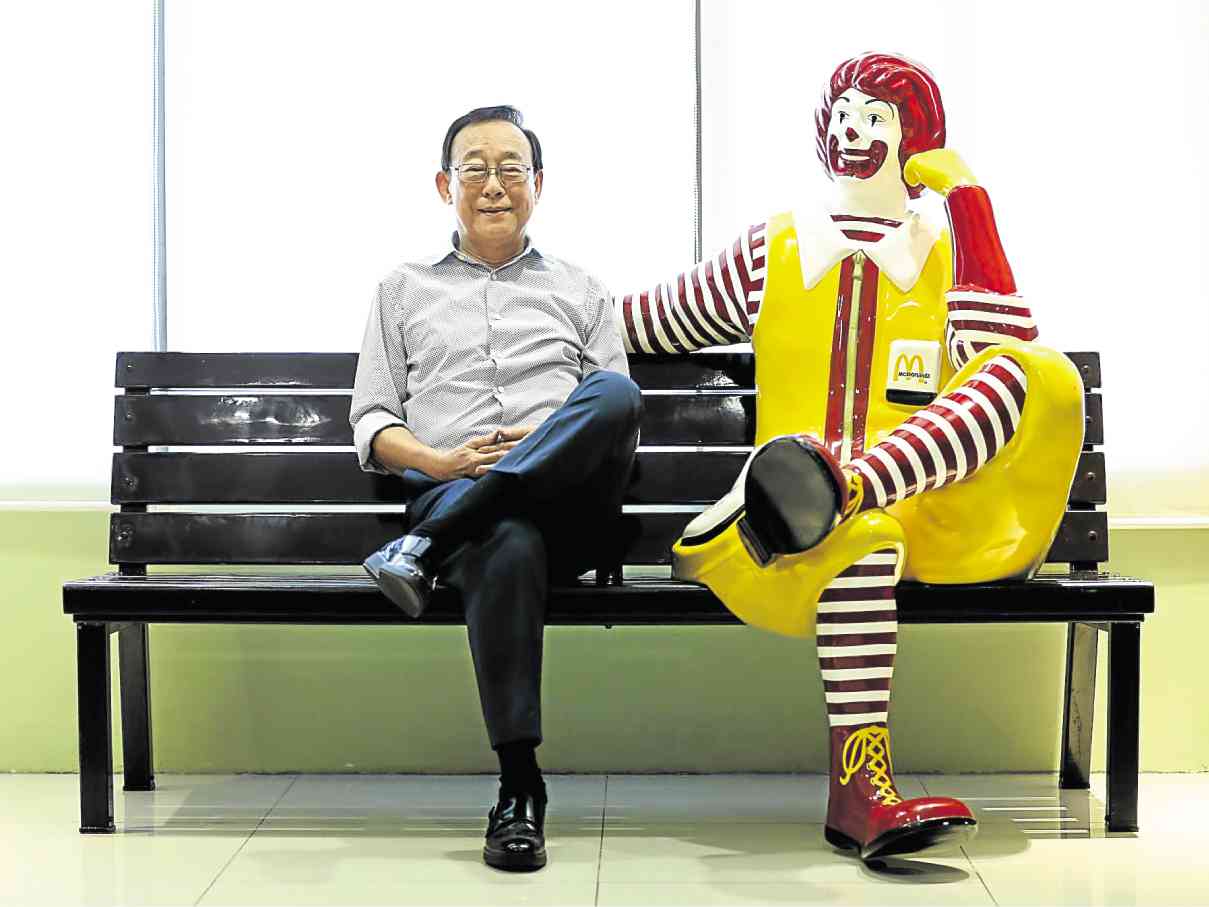 George Yang went from a single McDonald’s outlet in 1981 to a far-ranging business empire—but today, he’d rather be known as "the singing tycoon." LYN RILLON

What you do once you reach the top: The world according to George Yang

So wrote Rabindranath Tagore, the Indian poet and philosopher.

If this is true, then George Yang is twice blessed.

In the business community, Yang is widely admired as the savvy and hardworking entrepreneur who, from a single McDonald’s outlet in 1981, built up a far-ranging business empire that includes his flagship Golden Arches Development Corporation, the Bistro Group of Companies, First Georgetown Ventures, Inc., and other companies.

These days, however, he is better known as “the singing tycoon,” having discovered late in life that he also possessed a talent for singing and a passion for the classics.

Last May he held his own against pop phenomenon Alden Richards and soprano Rachelle Gerodias in “Songs From A Silver World,” a concert of songs from films, at Carlos P. Romulo Auditorium, at RCBC Plaza, that included such venerable classics as “Parla Piu Piano” (better known as the theme from “The Godfather”), “Lara’s Theme” from “Dr. Zhivago” and the theme from “Love Story.”

“Possessed with an innate or natural light tenor voice, Yang sings bel canto,” wrote musician and critic Antonio Hila.  “His tone is brilliant and pleasant to hear. He intones his lines with caress, does not force out his voice but unfolds it smoothly. Listening to him, therefore, is not a bore but a gratifying moment.”

Of Yang’s performance at the RCBC Plaza, Hila also wrote:

“Despite his age, his voice had retained its glow. What made his singing impressive was the sincerity with which he brushed his songs. He felt the sentiment of the songs, and breathed life into them. His phrasing was articulate and his high notes saucy, secure and brilliant.”

Professionals would kill for such glowing reviews; for an amateur it’s all but unheard of.

In the course of wining and dining business associates and friends, he recalls, he would often end up singing his heart out in karaoke bars.

“I found it fun,” he says.  “I don’t know if I was born with it, but I felt I could always carry a tune, even when I was young.  But it was never serious.”

He had once considered taking voice lessons.  But studies— at De La Salle College for his undergraduate business degree and Wharton for his MBA—and later work, always took priority.

“I didn’t know I could sing these kinds of songs, until I was already in my senior years.  I started singing old standards, and some classical singers told me ‘your voice is good for classical music,’ so I said ‘OK’”

Yang went to soprano Gerodias, one of the country’s foremost opera singers, who also happens to teach Voice at University of Santo Tomas.

“I said to her, ‘If you think I have a chance to develop, then take me on [as a student].  If not, then don’t’” he recalls.  “I wanted the challenge of finding out if I could do it.  She did, and that’s why I’m singing.”

After voice lessons with Gerodias, Yang started singing in earnest.

“I got invited to sing in public, so I had better be a tolerable singer,” he says modestly.

He has recorded two albums, “Yang Klassiks” and “Always Yang,” both containing a mix of the Neapolitan songs, film themes, operatic arias and standards that he favors.  He continues to practice his voice once a week with an accompanist, and does vocalization exercises every other day.

“It just evolved that way,” he says.  “Because some people think my singing is OK, they invite me to parties and to concerts as a singing guest.

Because of that I had to pay a bit more attention, and got better.”

But in finding his voice, Yang also seems to have found his balance.

“Music and business don’t have to be contradictory, they can be complementary,” he says.  “People take yoga, get into painting, and continue with their business.  In my case it happened to be music.  I find music to be a good complement because it relaxes the mind, like yoga.  A businessperson has to relax every now and then, and I think [music] is a good way to relax and refocus yourself.”

“I worked like a dog in the beginning of my career,” he says.  “When I was still in my 20s, I had a full time job, I was also a marketing consultant and I was also a professor at De La Salle University.  I had three or four jobs at the same time.”

“But I was only an employee for two years,” he continues.  “I always wanted to be on my own, to create my own business, because of my personality at the time.  I was very shy and not very good at promoting myself, so I didn’t think I could make it in the corporate world.  I chose a different path.”

That path led to McDonald’s, and the rest is history.

The saga of Yang’s business success has been written about frequently, and is better presented elsewhere.  But one thing they don’t teach in business school is, what do you do once you reach the top?

“Have I reached the pinnacle?” he says.  “There are so many people much much bigger than me.  But I’m OK.  I’m good.  My philosophy is, you have to be happy with what you have.  For some people, happiness is acquiring more and more.  I’m glad I have other interests.”

One of these is the Klassical Music Foundation, a nonprofit organization which Yang founded in 2008 to support deserving music students through scholarships and occasional concerts.

“I became a singer of sorts, which never crossed my mind.  I think this is a gift from God, so what can I do [in return]? I established the Klassical Music Foundation to help good singers achieve their dream.”

Apart from providing financial support so aspiring talents can complete their music education, the foundation also hosts occasional master classes by visiting teachers from abroad, and holds concerts to showcase the students’ singing.

“So far we have about 50 graduates,” says Yang.  “Some are teaching, others have competed abroad, or have singing engagements abroad.  They’re OK.  They are able to make a profession.  And most important is, they are happy: People in music may not be the richest people, they may have only a modest income, but they are happy because of the music.”

“I don’t know how to explain it, but you understand these things more as you grow older —the philosophical side of things,” says Yang.