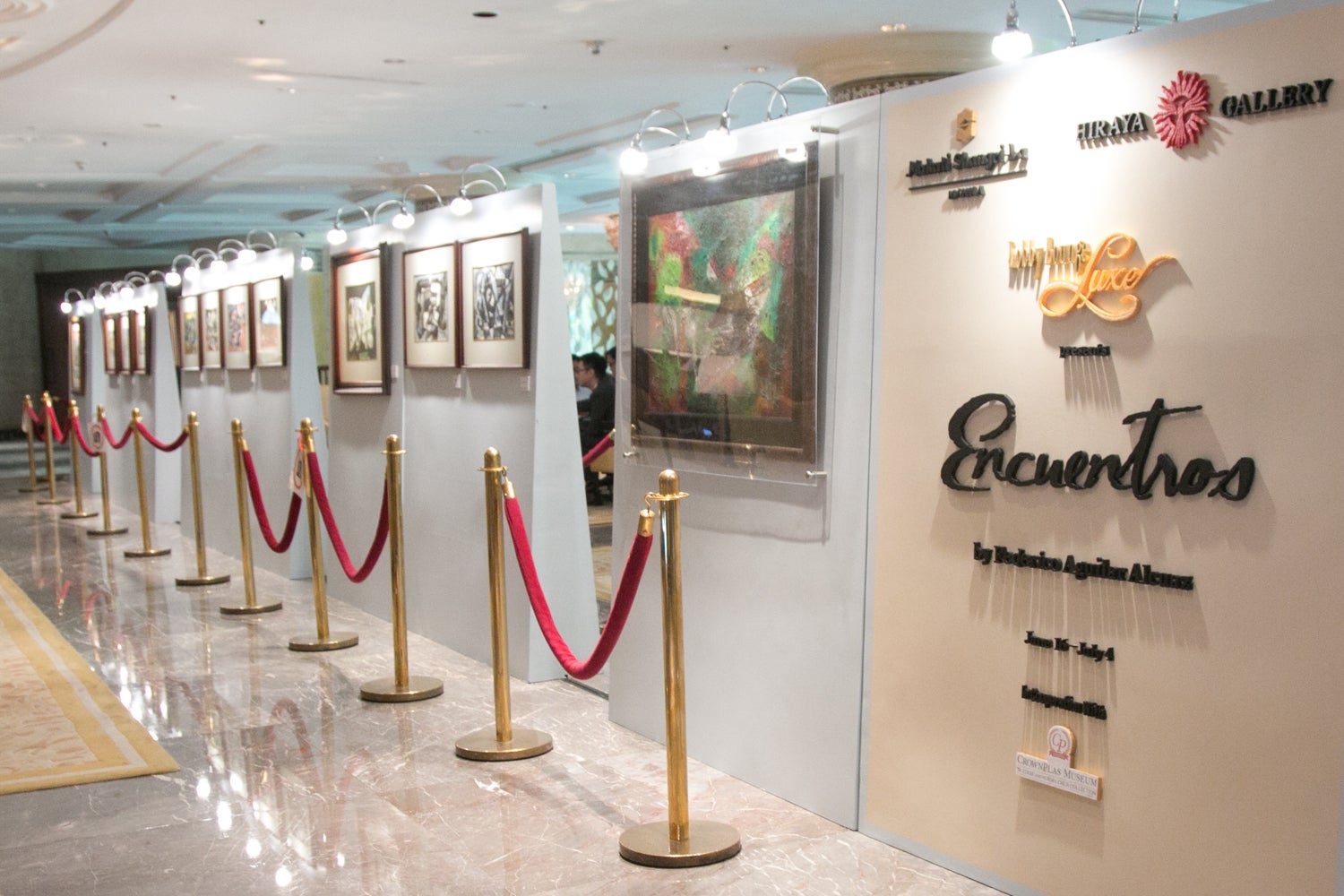 Aguilar Alcuaz at Makati Shang: The master in a 5-star hotel setting

Taking pride of place in the pop-up exhibition of rarely-seen Federico Aguilar Alcuaz paintings at the Makati Shangri-La Hotel’s mezzanine is an unassuming oil-on-canvas oeuvre, about two by three feet, that previously languished under its owner’s bed for years.

The story goes that the art lover’s wife could not stand the work. Rather than risk marital strife, he stashed away the beloved painting where it remained close but where she would not see it.

And there it remained until last month when Didi Dee, founder and artistic director of Hiraya Gallery, saw it, christened it “Little Prince” and made it standard bearer of 28 Alcuaz works, all from private collections, now being enjoyed by hotel guests.

It is an untitled work, Dee clarified.  Somehow, she sees the silhouette of a child of royalty among the splotches of green, white, maroon and black.

One can sense the excitement in Dee’s voice when she related the prince’s provenance.

The collector received it as a gift back in 1991. Alcuaz, a world-famous Filipino painter, finished it in 1969. Imagine spending more than half your life under a bed.

Show the piece to an avid Alcuaz collector and watch his jaw drop.  Which was what happened when Dee showed the piece to the owner of CrownPlas Museum, a private collector and Makati Shangri-La regular who himself generously lent more than a dozen Alcuaz watercolors for the exhibit.

Paintings from the CrownPlas collection dominate one side of the pop-up dubbed “Encuentros” along with “Little Prince” at the mezzanine floor of Makati Shangri-La.  Another side has paintings from the collections of Alcuaz’s son Christian and three other private collectors.

The Alcuaz exhibit that shows only until tomorrow, July 5, is Dee’s second foray into showing art at the Makati Shangri-La.

Her first was “Love the Earth, Heal the Spirit” that had 17 works of Filipino artist Fernando Modesto and ran for two weeks in early June.

The exhibits attract guests from a wide demographic.  There are executives, young professionals, students and couples who notice the quiet exhibit, approach and linger.

This is exactly what Marco Tiraferri, the hotel’s executive assistant manager for food and beverage, had in mind.

The exhibits are part of the hotel’s Lobby Lounge Luxe project that began with a joint exhibit by fashion designer Rajo Laurel, luxury pearl brand Jewelmer and the Makati Shangri-La last April.

Dee said her involvement in the project was serendipitous. Tiraferri initially offered her friend, artist Sequi Cu-Unjieng the space at the lounge where Laurel and Jewelmer previously showed.

Tiraferri’s idea is to bring art to the hotel, make it more accessible to the guests by taking advantage of the foot traffic the lobby lounge witnesses daily. Since they are in the hotel, why not make the visit more memorable by treating them to art for free?

Dee agreed to help on one condition: Transfer the exhibit to the mezzanine where the art can be viewed at a more leisurely pace. The foot traffic would still be there anyway, with three restaurants-Sage, Shang Palace and Inagiku-and multiple function rooms in the area.

Besides, the mezzanine offered a calmer view of the musicians who perform for guests enjoying afternoon high tea at the lobby.

Cu-Unjieng’s show ran from April 7 to May 7. Noting its success, Tiraferri turned to Dee for more art. At that time, artist Modesto had just finished his exhibit in Dee’s Hiraya Gallery.

“We were so lucky to have a good show of 17 works.  Of those pieces, there were eight big new canvases that people never saw.  He took them out of his personal collection.  It all worked well,” Dee said.

The late Alcuaz’s opening night on June 16 did not have many guests.

“But they lingered until late. One guest chanced on a friend who ended up buying five small works. The friend said he had been looking for Alcuaz’s works for a long time,” Dee recalled.

The gallery owner said Tiraferri’s plan has taken off very well for all parties concerned.

“This is an opportunity to have a presence in Makati.  (Hiraya Gallery is located on UN Avenue in Ermita, Manila) without having to pay the exorbitant rent.  We have people giving positive feedback about this venture, those who do not go to Ermita.  I think this is working well for the artist, the hotel and the gallery.  A win-win situation,” she noted.

Dee admits that a hotel is “a very untraditional venue for art.”  Still, Makati Shangri-La aims to present a good range of Filipino contemporary art that comes with each visit, at least until the end of 2016.

“Encuentros by Federico Aguilar Alcuaz” runs until tomorrow, July 5 at the Lobby Lounge Luxe on the mezzanine floor of the Makati Shangri-La Hotel. Admission is free.