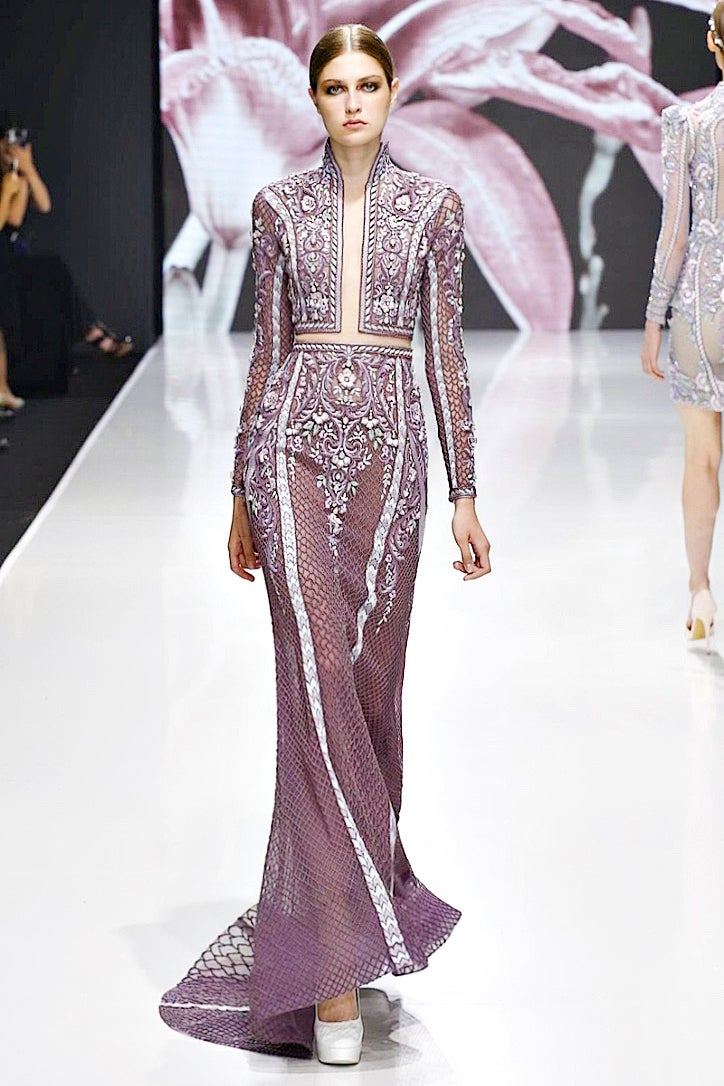 PARIS—It was a rainy, overcast day in Paris on the first day of Paris Haute Couture Week, but nothing could dampen our spirits, as this day was nothing short of historic for Philippine fashion.

Dubai-based Michael Cinco was the first Filipino designer to show in Paris haute couture (Lesley Mobo presented his Mobo Women’s Wear in 2009, in ready-to-wear) right in the heart of the Jardin des Tuileries.

Fifteen years ago, Cinco sat on one of the benches at the Tuileries, and promised himself that one day, he would have a show here.

When the Asian Couture Federation invited him to be part of a group of elite designers in Asia to frontline the launch of its retail arm, Couturissimo, during Paris Haute Couture Week, it was Cinco’s dream coming into fruition. There was no question in his mind that he would hold the show in the gardens.

Cinco’s prêt-à-porter creations were a reflection of the same garden that inspired him 15 years ago. Dresses decked out in floral patterns evoked playful summers in Paris.

Other designers, Indonesian Sebastian Gunawan and design duo Yassen Samouilov and Livia Stoianova of On Aura Tout Vu, were also chosen to be part of the show.

His show-stoppers were a pink princess ball gown and an ultra-glamorous, majestic red number with asymmetrical hem made from delicate lace, embellished with minute laser-cut organza flowers.

When asked if he did anything different or special compared to his previous works, Cinco acknowledged a reference to his Filipino roots.

His collection was divided into five parts, according to design elements: the Solihiya, Banig, Calado, Barong and Terno, plus his “Impalpable” collection.

The Solihiya collection mimicked the solihiya weave normally found in furniture from the Spanish colonial era, but this time, adorned with pearls and micro beads.

The Banig collection, characterized by the crisscross weave of the traditional Filipino mat, decked out in French paillettes, also referenced his place of birth, the province of Samar, where banig mats are local handicrafts.

The Calado collection took inspiration from the Spanish mantilla, a veil normally used by women in church during the Spanish colonial era, with exquisite calado embroidery all made by hand.

The Impalpable series depicted fully beaded, Swarovski crystal-encrusted voluminous ball gowns, an ode to the glamour of Hollywood. For the finale, his pièce de résistance, a piña embroidered bridal gown with a long dramatic train, closed the show.

In a city where haute couture is a term used only by a select few, to show a collection under one’s name in Paris Haute Couture Week is already a feat never before achieved by any Filipino designer in recent history. In the ’70s, Roy Gonzales showed haute couture designs in Paris as the designer for the house of Jean Patou.

Cinco has always been a trailblazer, having dressed international celebrities such as Beyoncé, Rihanna and Lady Gaga, and his debut in Paris might just open opportunities for other Filipino designers. To go international is a dream for most and, if this is where the future of Philippine fashion is headed, we can surely look forward to what lies ahead.