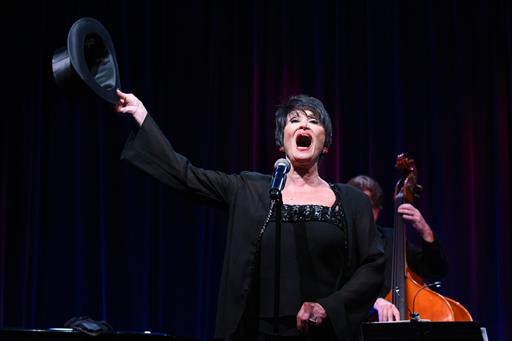 In this Aug. 2, 2015 file photo, Chita Rivera performs during the "Chita Rivera: A Lot of Livin' to Do" segment of the PBS 2015 Summer TCA Tour held at the Beverly Hilton Hotel in Beverly Hills, Calif. On heels of the chart-topping single that continues to benefit victims of last month’s deadly massacre in Orlando comes a benefit concert for the city. “From Broadway With Love: A Benefit Concert For Orlando” will have the Broadway and Orlando theater communities unite to provide an evening of entertainment for the shaken community. AP

Broadway star voices will combine for benefit in Orlando

NEW YORK — On the heels of the chart-topping single that helps victims of last month’s deadly nightclub massacre in Orlando comes a benefit concert for the city.

The July 25 show will feature appearances from some of Broadway’s biggest stars, including Brian Stokes Mitchell, Norbert Leo Butz, Kelli O’Hara, Chita Rivera, Jessie Mueller and many others. Additional performers will be announced in the coming weeks. Tickets go on sale Thursday.

“From Broadway With Love: A Benefit Concert For Orlando” will unite the Broadway and Orlando theater communities, providing an evening of entertainment for the shaken community, organizer and talk show host Seth Rudetsky told The Associated Press ahead of the official announcement Thursday.

The benefit was the brainchild of Rudetsky; his husband, producer James Wesley; and Tony Award-winner Kenny Howard. It will be held at the Dr. Phillips Center for the Performing Arts, a day after the cast and creative team from the musical “Fun Home” delivers a benefit concert version of the Tony Award-winning show at the same venue.

Wesley feels performing in the city can only help the healing process. “It’s a small town,” he said. “Everyone knows someone that was murdered, so it will be touching. But it will be a fun evening, too.”

It was a mind-clearing bike ride on the morning of the tragedy that gave Wesley the idea to record a song for the victims of the deadly shooting that claimed 49 lives at the Pulse nightclub.

He and Rudetsky called some of their friends, and a few days later a who’s who of Broadway stars came together to record the 1965 Burt Bacharach-Hal David song, “What the World Needs Now Is Love.”

Wesley chokes up as he describes his reason for choosing that particular song and it’s appropriateness in counteracting “an almost never-ending cycle of violence and hate.”

“I realized this at the time, but unconsciously I think I also chose it because we’re dads and we have a 15-year old daughter. I didn’t want her to grow up thinking that there was no hope in the world. And I do think that people are basically good, and I wanted her to know that’s how we feel… you can hear it in the song. There’s nothing but love,” Wesley said.

He admits thinking about the impact that other charity singles made when the idea came to him, including the 1985 hit, “We Are the World,” raising money for African famine relief, and “That’s What Friends Are For,” which benefited the American Foundation for AIDS Research.

After the remade “What the World Needs Now Is Love” topped the charts on iTunes, its songwriter, Bacharach, provided some perspective to what they accomplished. The 88-year old composer, who was on tour in the United Kingdom, called them up, told them the new version made him tear up and said: “I want to thank you person to person.” TVJ