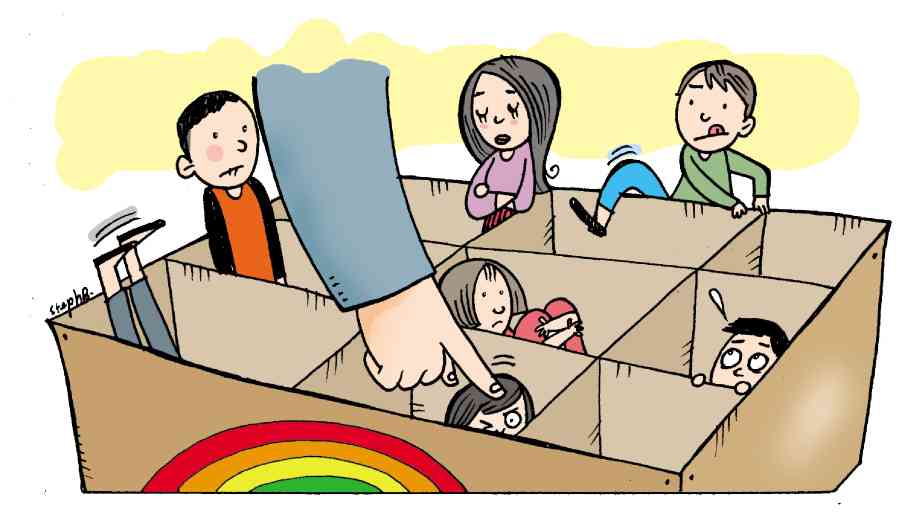 I always thought I was a straight girl, until I wasn’t.

After 27 years of dating only men, I fell in love with a woman and spent the next eight years of my life with her.

She, who also had dated only men, had a much harder time coming to terms with our relationship than I did. For the first two years, while she flip-flopped between wanting to be with me and thinking that what we were doing was wrong, I was steadfast.

Screw society, I loved who I loved; I didn’t care what anyone else thought.

But people had and have questions. What did that mean? Am I bisexual?

A lesbian? Was that relationship a fluke? An experiment? Was I just curious? Did I miss a penis? Does the fact that I have gone back to dating men after our relationship ended mean that I am actually straight?

Does the fact that she is now with a new girl mean she is really a lesbian?

“I’m sexually fluid, I guess,” is what I sometimes grudgingly say, when people demand a label.

And people always demand labels. Explanations. Even when, in reality, no one owes it to them.

When the tale of Angie Mead King and Joey Mead hit the headlines this past week, people had a lot of questions, including some very inappropriate ones.

I’ve tried to explain it patiently to the people around me. To my grandparents. My parents. My friends, even gay friends who I expected to be more open-minded and gender aware.

“There is a difference between gender identity and sexual preference,” I would say, quoting something my friend J, a transgender woman, once told me as we sat in a coffee shop to talk about her transition. “Who they want to sleep as is an entirely different thing from who they want to sleep with.”

When I heard about Angie, the first thing that popped into my head wasn’t a question. There was no desire to figure out which box to put her and her relationship with Joey in. Instead, I thought, “It must feel so, so good to finally be free.”

That’s how I felt when Caitlyn Jenner introduced herself to the world, too. Imagine spending 60-something years of your life having to hide who you are—wouldn’t you be happy to be liberated, too? And shouldn’t we be happy for her?

I look at my younger cousin R, a transgender woman, and my heart is filled with joy that she doesn’t have to wait until she’s in her 60s to free herself. I am grateful that she has parents who have shown her nothing but love and support, setting an example for the rest of our family, even those from older generations who initially struggled to understand why their grandson was wearing high heels and dresses and joining beauty pageants.

I think of my older cousin C, a lesbian who came out in her late 20s, and is now in a beautiful relationship with a great woman.

I recall my friend A, a straight guy who fell in love with a transgender woman, who fought for their relationship against all odds.

I remember the hours I spent reading the blog and the book “Raising My Rainbow,” written by Lori Duron, a mother raising a gender-creative son, and how it opened my mind and my heart.

I go back to the afternoon I spent walking around with my aunt in a gorgeous arboretum in Seattle. We talked about my breakup and my future.

“I really think I’m done dating women,” I told her.

She said, “You never know. If you meet the right woman, that can change.”

And I just shrugged, thinking, love will come and when it does, I will welcome it, no matter which form it arrives in.

“Why is your generation so accepting and tolerant?” I’ve been asked again and again.

I don’t know. Maybe because, transgender or not, we all know the feeling of wanting to be accepted?

Living during a time when no place seems safe—not schools, not malls, not the streets, not the airports, not the trains, not the airplanes, when the simple act of going dancing in a club or watching a movie can get you killed—maybe our instinct has become to embrace and celebrate the love we see, all kinds of love, even the ones deemed unusual by more conservative minds.

I am grateful to be surrounded by love I could not understand. Even my own. Somehow, it makes living in a world rife with acts of terror I could not comprehend a little more bearable.