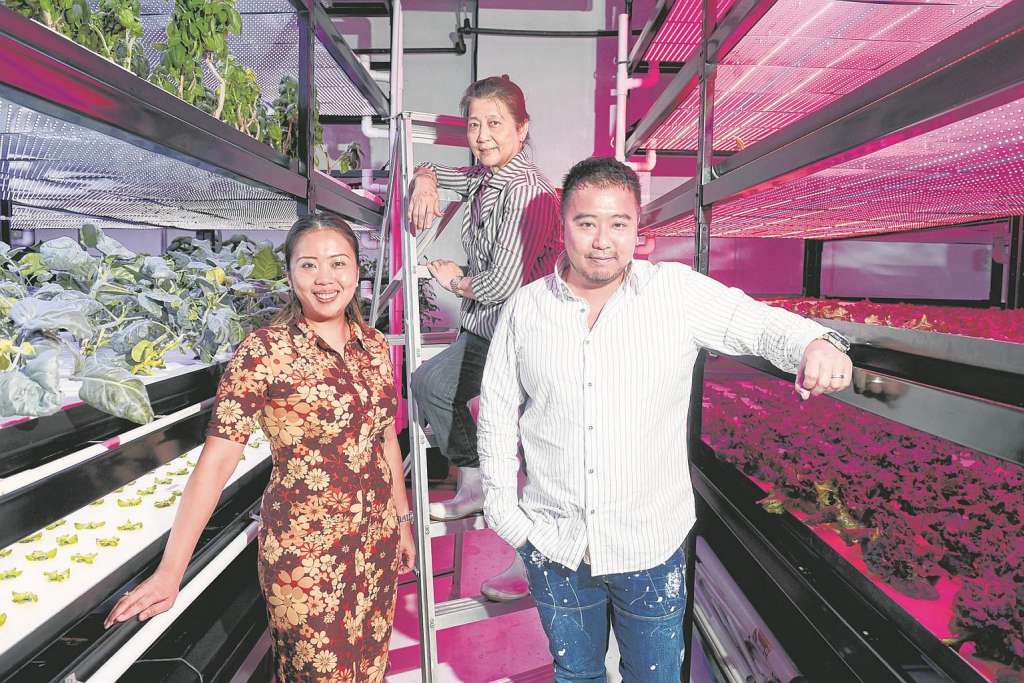 Vertical farms on the rise in land scarce Singapore

Vertical farming is growing in Singapore. From just one in 2012, there are now seven licensed vertical farms producing vegetables, fish and crab.

These farms use high-tech and high-yield methods to overcome the limitations of traditional farming and transform their work into lucrative businesses.

Vertical farming is also gaining popularity because the farms optimize land use in land-scarce Singapore and can operate on minimal manpower.

Packet Greens, for instance, is an indoor vertical vegetable farm that sits on 1,500 sq ft of space – about the size of two three-room HDB flats – in a unit in an industrial building in Boon Lay Way. Only three people are needed to harvest the 30kg daily yield of vegetables.

For those with larger premises, the numbers are more impressive.

Sky Greens, Singapore’s first vertical farm, produces up to 1,000kg of vegetables a day. About 10 farmhands are needed to harvest that amount. When the farm reaches full capacity early next year, it can produce 5,000 to 10,000kg a day.

Vertical farms have high yields because they are high-tech. At Sky Greens in Lim Chu Kang, vegetables grow on 9m-tall towers made of tiers of planting troughs rotating around an aluminium frame. Each tower produces five to 10 times more vegetables than conventional methods in the same land area.

Apollo Aquaculture Group, which has a vertical fish farm and a crab farm, uses high-tech water treatment, which circulates water in self-contained systems that clean it more efficiently. An optimal environment for the fish protects them from disease, lowers death rates and allows more fish to be reared in a single tank.

Owners say the most challenging – and expensive – part of setting up a vertical farm is sorting out the technology. Most took about two years to design and develop their systems.

The founders of indoor vertical farm Sustenir Agriculture in Admiralty, which began operations in 2014, spent 11/2 years speaking to consultants and professors, so they could understand the possibilities and limitations of growing vegetables in a controlled indoor environment.

Today, co-founders Benjamin Swan, 35, and Martin Lavoo, 29, who have invested US$2 million in their farm to date, have a global patent on their infrastructure design. They say their technology allows them to produce vegetables that have no exposure to chemicals, pesticides, pollutants and even dirt.

Vertical crab farm Gills ‘N’ Claws in Kranji was born after 21/2 years of research and development. The farm fattens up Sri Lankan mud crabs that are bred in a hatchery in Sri Lanka and then sells them to crab dealers and restaurants here.

Once things are up and running at these farms, the gains are significant. Gills ‘N’ Claws chief executive Steven Suresh, 46, says about 1,000 mud crabs can be raised in 100 sq m, compared with 30 in open farming.

Because of the high quality of Sustenir Agriculture’s produce, the company counts among its clients restaurants from top food and beverage groups such as Tung Lok, Les Amis and Da Paolo.

In spite of the high set-up cost, the farmers say their products are reasonably priced. Apollo Aquaculture chief executive Eric Ng, 43, who has spent about US$2.9 million on his farms, says his hybrid grouper retails at about $20 a kg, which is comparable with the market rate.

In some cases, the produce is cheaper than the market rate.

The farmers’ efforts have taken them beyond Singapore.

Sky Greens has been actively expanding overseas in markets such as China and Thailand and is exploring Malaysia and Hawaii.

Suresh, too, is in talks with investors from countries including Australia and Germany.

The Agri-Food &amp; Veterinary Authority of Singapore says it is supportive of vertical farming as it makes use of technology and production systems that optimise land use and boosts the capability and productivity of local farms.

Vertical farmers such as Swan hope their efforts will draw younger ones. He says: “The sector needs young talent to find new and creative ways of farming, so that we can make a difference to people’s lives and the environment.”

His 10m-high, three-storey vertical fish farm is the only one of its kind licensed by the Agri-Food &amp; Veterinary Authority of Singapore (AVA). Everything can be remotely controlled and is carefully programmed, right down to the amount of fish feed dispensed via automatic feeders.

Ng, 43, says of the precision involved in running the farm in Lim Chu Kang: “This operates more like an engineering plant.”

His father set up the farm in 1969. It employed traditional fish farming methods until Ng took over the reins when his father died in 2009.

“My father was pro-technology,” he says. “He told me to transform things if I saw the need for technology to move the business forward.”

In 2009, with help from a Spring Singapore technology improvement grant, he built a $445,980 tank quarantine and filtration system for the farm’s ornamental fish, which reduced water usage dramatically.

The system, which he calls the Aquadeck, comprises rows of tanks stacked three levels high. They allow for high-density stocking of fish while maintaining high water quality.

After that took off, Ng says he started thinking multi-tier. With a land area of 20,000 sq m in Lim Chu Kang, he is not lacking space. However, he believes developing vertically is the way to go.

“We can intensively farm our products in a single unit and with a smaller footprint.”

The yield from a vertical farm is eight to 10 times more than what he can get from open farming.

The three-storey structure was completed last November, following two years of design and development. It comes with six ponds – two on each level. Each pond is 135 sq m and can hold about 22,000 fish fry.

Ng, who is married to a housewife and has three children, has reared seabass, giant trevally, several types of grouper and shrimp.

“It’s all in the water,” he says of the successful rearing method, which he adds is parasite-free and does not have fin rot or gut problems.

He supplies the fish to restaurants, including Majestic Bay Seafood Restaurant at Gardens by the Bay and Kai Garden at Marina Square.

The soft-shelled mud crabs are housed individually in vertically stacked, toolbox-shaped containers and fed fresh fish scraps. He gets the Sri Lankan and Philippine mud crabs from suppliers in Singapore when they weigh 80 to 100g and readies them for sale when they are 300 to 500g.

With the business going swimmingly, he has his sights set on bigger things. He intends to build another similar vertical farm at his Lim Chu Kang premises and will be helping a fish farmer in Sungei Tengah construct a multi-tiered structure.

He will have to relocate the farms next year when the lease expires, but he says that does not mean his efforts would be wasted. Because of their modular design, he can “strip down” the farms and build them up again.

He hopes to boost home-grown production with his vertical farms. In 2014, only 8 per cent of all fish consumed here – about 4.2 million kilogrammes – came from local sources, well short of the AVA’s 15 per cent target.

Ng hopes to produce 7 to 8 per cent of Singapore’s fish intake in three years’ time. It is a bold vision, considering his farm is producing just 0.2 per cent of the fish consumed here at the moment.

It operates out of a single, 1,500 sq ft unit in industrial building TradeHub21 in Boon Lay Way and can grow 20 to 30 varieties of vegetables at a time.

In the two years that it has been in operation, it has succeeded in growing more than 50 types of vegetables, herbs and edible greens. These include lettuce, rocket, celery, kale, basil, thyme, mint and dill, and exotic varieties such as shiso, ice plant and the swollen- stemmed kohlrabi.

The farm was started in 2014 by entrepreneur Phuan Pui Jong and his wife, Madam Tio Siew Geok, 64. He died of a heart attack in November last year at age 70.

Before the farm, Phuan and his son founded home-grown solar panel-maker Sunseap Enterprises in 2000.With a slowdown in the manufacturing sector, the older Phuan decided to look at other business opportunities.

The farm is a product of his interest – he used to grow herbs and flowers at home. In 2014, he and his wife went to Taiwan to see how indoor vertical farms there were run.

Impressed by how these could grow pesticide-free vegetables that could be eaten safely without first being washed, he paid a six-figure sum to import the technology from one of the farms in Taiwan to Singapore.

But the knowledge transfer did not go according to plan because the system did not work well here.

The couple worked hard to tweak things and made the farm flourish. The Taiwanese farm had taught them how to grow xiao bai cai only, but their farm could cultivate more than 30 varieties by the time of Phuan’s death.

The vegetables are grown via hydroponics on 3m-high racks that have five to six levels each. They are packed tightly together to allow for maximum light absorption.

As they are grown indoors, the vegetables absorb light from LED lighting and the water used to irrigate the plants is packed with a “secret recipe” of nutrients, says Phuan.

The highly controlled environment means there are no pests and the vegetables are worm-free.

The vegetables take about two weeks to grow before they are harvested – about half the time it takes for outdoor farms to grow vegetables under normal conditions.

Because it has succeeded in growing more than 50 types of vegetables, herbs and edible greens, the company is ready to take the business to the next level.

So far, it has been producing the greens for small-scale community events and supplying them to eateries such as Park cafe in Holland Village.

The produce is also available for sale via the company’s Facebook page. It will soon have an online site for orders.

Frank Phuan, who is the chief executive of Sunseap Group, which provides solar energy, has been reaching out to restaurants in the vicinity of the farm and meeting investors to explore farming collaborations, in which each farm specialises in one to two vegetable types.

The siblings, both married with children, say it is a joy to see their parents’ efforts paying off.

Phuan says: “I eat more vegetables now than I have eaten at any other time in my life.”