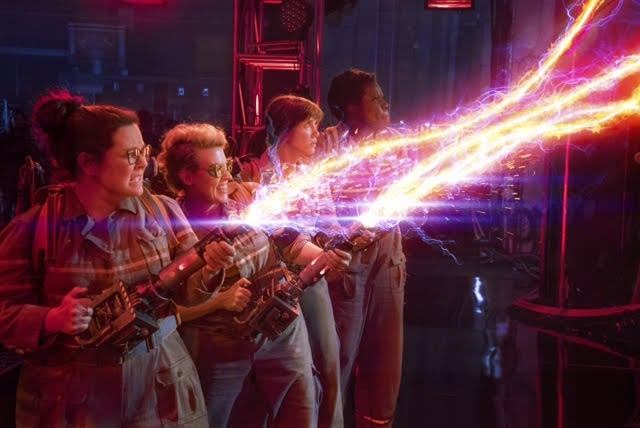 Thirty years after the beloved original franchise took the world by storm, “Ghostbusters” makes its long-awaited return, rebooted with a cast of hilarious new characters.

A pair of unheralded authors, Erin Gilbert (Wiig) and Abby Yates (McCarthy), write a book positing that ghosts are real. But the academic world does not take them seriously. When ghosts invade Manhattan, Gilbert and Yates team up with Jillian Holtzmann (McKinnon), a nuclear engineer, and Patty Tolan (Jones), a subway worker, to save the world from a mysterious and powerful demon known as Rowan (Neil Casey), who can exercise control over human forms.

Given the opportunity to reboot the franchise, it was Feig who saw a way to bring one of his personal comedy influences into the 21st century.

“I was an enormous fan when ‘Ghostbusters’ first came out,” he says. “But the thing that put it over the top was the context of an enormous world of fighting ghosts with technology… that’s the greatest idea in the world. It’s one of these things that make you say, ‘I wish I had thought of that idea.’”

Naturally, the idea for another “Ghostbusters”—as a sequel—was one that had been explored for quite a while.

“I’ve always wanted to do another sequel,” says Ivan Reitman, who directed and produced the first two iconic films in the franchise, and now produces the new film. “It’s one of those movies that you should revisit and I was really hoping that I could do it.”