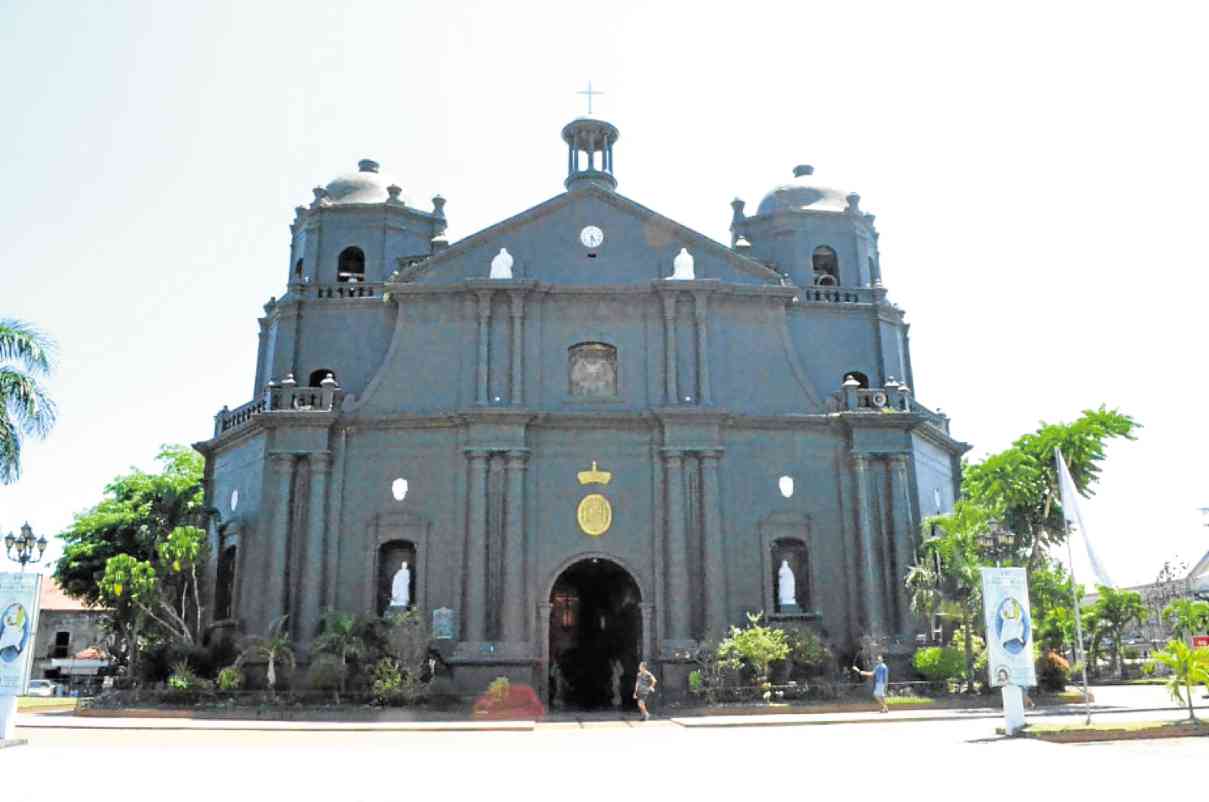 NAGA Cathedral with its controversial “water-proofing” done two years ago

AN INTERACTIVE tour of the historic center of Naga in Camarines Sur was held recently to promote the importance of its heritage especially among the younger generations.

In the 17th century, this Spanish city was called Nueva Caceres. In fact, Naga Church is still called the Archdiocese of Nueva Caceres.

Hundreds of participants joined the one-day Nagalakaw: A Walk through History, organized by the Nueva Caceres Heritage Movement (NCHM) with the support of the city government and Centro Naga Business Club.

The tour started at Danlugan ni Ina, a riverside mini plaza where the pagoda of Our Lady of Peñafrancia docks after the traditional fluvial parade during the fiesta celebration in September.

It moved to Plaza Nueva Caceres adjacent to the city market, which used to be the location of the original Naga Cathedral, the Episcopal Palace and the old cemetery, and on to Plaza Rizal (formerly Plaza Alfonso XIII), passing by the prewar Abella buildings on Calle Magallanes (now General Luna Street).

Surrounding Plaza Rizal during the Spanish period were the sites of the Tribunal, Casa Escribano, Casa del Gobernador and Carcel de la Provincia, which are now business establishments.

At every stop, actors from University of Nueva Caceres (UNC), University of Santa Isabel (USI) and Teatro de Santa Luisa performed short skits on the history of each place and its prominent personalities.

Barlin was the first Filipino Catholic bishop in the country. He was born in Baao, Camarines Sur in 1850.

After his ordination in 1875, he became the capellan de solio (chaplain) of Nueva Caceres Cathedral, later becoming the vicar forane of the province of Sorsogon and parish priest of Sorsogon town.

Behind Barlin’s monument is the site of what used to be Cuartel de Guardia Civil, now occupied by the local police. Beside it was the hideout of the revolutionary Vicente Lucban and the site of Hospital Medalla Milagrosa.

A few blocks away is the religious center of Naga Metropolitan Cathedral, the Seminario, and what used to be the site of Escuela Comun in front of the church compound.

Beside the plaza and the weird-looking black cathedral are the Archbishop’s Palace and the 1870 Colegio de Santa Isabel (now USI), the first normal school for girls in the country.

The monument pays homage to 15 Bicol martyrs who were unjustly charged with plotting to kill the Spaniards in various parts of the Bicol peninsula. They were executed by firing squad at Luneta on Jan. 4, 1897. Their remains were never found.

Heritage advocate and UNC instructor Jonathan Gamalinda explained the event “as one way of bringing interactive new techniques in teaching heritage,” particularly to the younger generations in the city who, he said, lack awareness of their heritage properties.

“It’s for love of heritage,” said Gamalinda, who, with concerned citizens of Naga, formed NCHM in 2014.

He said the event was the first interactive and in-depth heritage walk the city had done.

Historian and author Danilo Gerona said the activity “is a must, something that is needed today.”

Gerona explained that while Naga was devastated during World War II, it was the “human calamity that’s generated by the lack of appreciation and understanding of history” that resulted in the destruction of heritage structures.

He said surviving structures were gradually demolished by local administrators “who do not care and appreciate these places.”

He added the people of Naga “suffered so much from aridity in historical consciousness.”/rga