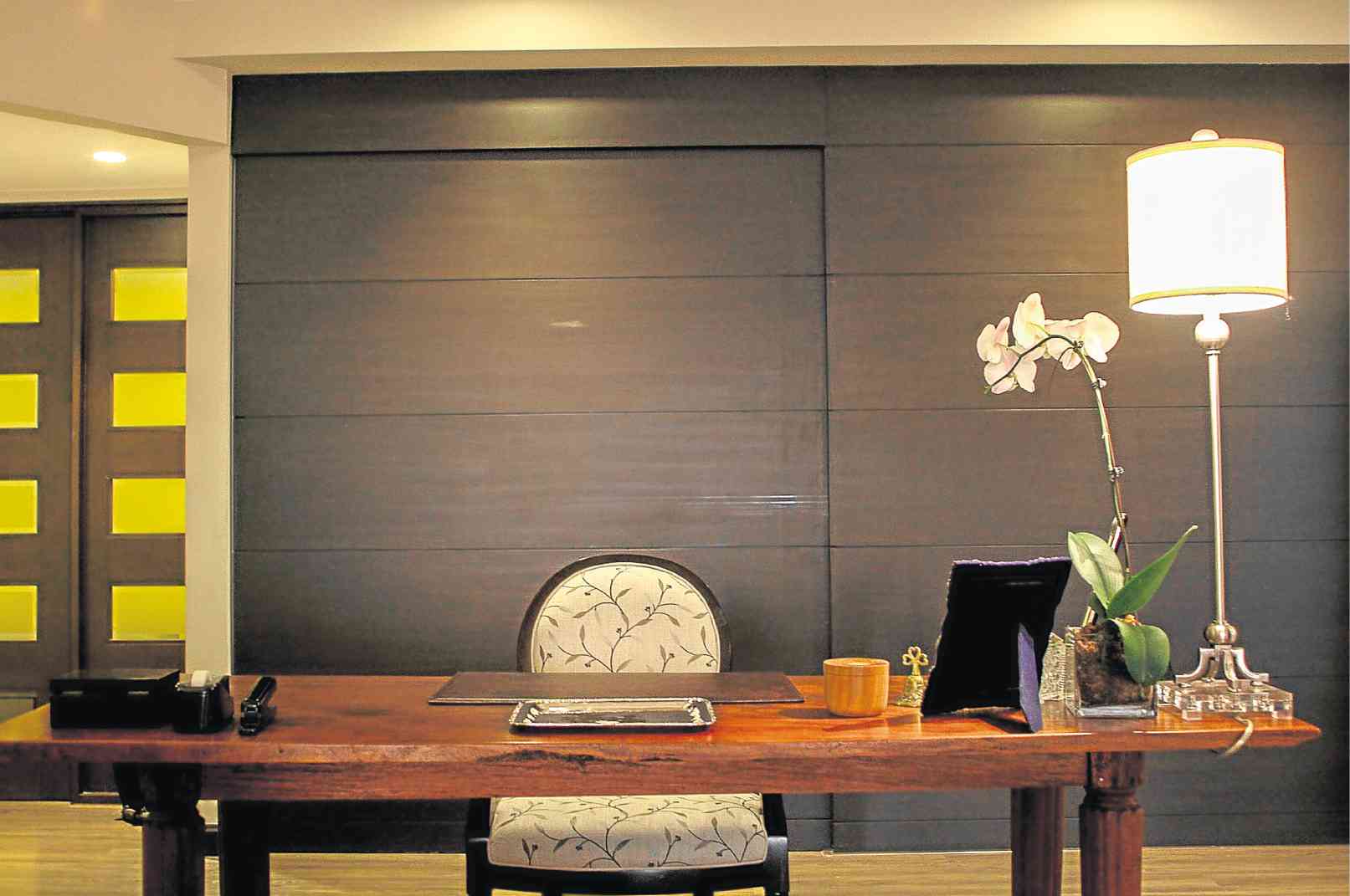 SUSIE Madrigal Bayot’s work table in her private space is the room’s focal point. The table is adorned sparely with a framed photo, an imposing table lamp and various office supplies. Behind the table is a sliding wall panel that hides a closet for various necessities.

Friends have been saying how Susie Madrigal Bayot has been blooming these days. In truth, she’s been looking quite refreshed for some time now.

Hers is a story of how a mature woman has gained back her independence, after a failed marriage, and bounced back from it, thanks to the support and constant presence of friends. It’s what you can call a bloom-back.

The ultimate proof of that is the home she’s made for herself. It is a sanctuary—a chic sanctuary.

Bayot’s home is unique in that she has two units in this Makati condominium—not adjacent, but one on top of the other.

She has a much-coveted 320-square meter penthouse, with wrap-around open-air balcony with smashing views of Makati, and a standard 260-sqm unit that is her private space.

Setting up her condo was one of the first things she did when she moved out of her old family home.

The penthouse unit was a gift from her late aunt Chito Madrigal Collantes. For years, it was in the inventory of the Madrigal family’s realty business. When her aunt died, she decided to use it.

Initially she felt not having enough space here—she could entertain only up to 20 guests—having been used to living in a stately home. That’s why, when the unit below it became available, she immediately got it to enlarge her living quarters.

The choice of Makati was obvious—it was nearer to all her friends, mostly classmates from her Assumption days, like her close friend Menchu Katigbak.

“Nowadays, traffic is so bad,” Bayot admits. “This is the place that is closest to my friends.”

The address is also near the Madrigal headquarters, where she has her own office. While she could just be enjoying her status in life, she still goes to the office every now and then. It gives her the chance to see her two brothers, often at lunch.

Although the flats serve different functions, they have a unified theme, thanks mainly to the magic of Carol Masibay Garcia, the former Mutya ng Pilipinas who has taken to fixing the homes of her friends—and is so good at it.

The units mirror each other; both are calm and quiet, with the lady of the house bringing light and color into the rooms.

The design reflects Bayot’s current state of mind—tranquil and comfortable with herself.

The penthouse serves as her entertainment center. Here she spends quality time with friends and family, particularly her five grandchildren, who visit her regularly on weekends. It is a complete flat with a living space, dining area, kitchen, music/game room and bedrooms.

The flat below follows the same layout as that of the penthouse, although she knocked down the wall between the bedroom units to create a larger one. The touches here are more intimate. There is a profusion of family photos, mementos and her collection of books, mostly culinary ones.

The penthouse has a large living area, with lots of comfortable seating for guests. Connected to it is the music room, which also functions as a game room most nights of the week.

On another side is a dining area with a circular table for eight. Behind a door at the side is the well-equipped kitchen, where Bayot and her cook whip up the delicious goodies her close friends swear by.

The entire space is in neutral gray, while the couches are in dark grayish brown. Livening up the place are the touches of color arranged throughout the penthouse.

Hanging in the living area is a large pointillist canvas by Nestor Vinluan, which she bought from Charlie Cojuangco in 2013.

Abstractions by Trek Valdizno adorn the other wall of the living area and the hallway leading to the bedrooms. A huge canvas by Nikulas Lebajo of goblets arranged in a frieze is the centerpiece in the dining area; in the music room, a painting of a piano with a keyboard running wild is the eye-catcher.

But it is not only the artworks that add warmth to the room. Here and there, pieces from Bayot’s collection add contrast to the light-toned walls. It could be the baby grand piano in the music room, the assortment of wine glasses and tumblers at the bar, the pewter tea service resting by a side table, the silver candelabra on the buffet, or the dark enameled pottery around the room.

There is more that is hidden from plain view. An empty, dark-colored wall near the dining area hides an entire cabinet of flatware and tableware. Just give it a light push, and the riches behind it are revealed. A similar wall in the unit below also serves the same purpose.

The artworks give way to framed photographs in the flat. Here, every table and shelf display photos of people Bayot holds dear to her heart: her children, her grandchildren and her loved ones.

The couches give way to divans where she spends most of her time watching the latest movies on a huge flat-screen television set. She is amused that her friends no longer bring DVDs on their visit, but flash drives containing hundreds of files of films.

The focal point of the room is the massive writing desk where she does most of her work. The table is clean of documents, save for a couple of silver frames on the side.

Off to the side is the dining area with a circular table for six guests. There is also an heirloom cabinet she inherited from her grandfather, the Bayot patriarch. It is a solid piece of furniture, whose natural light finish makes it stand out from the all the other pieces in the room. It is one of the things that connect her to her family.

Nowadays, she travels as often as she can. She counts Paris and Madrid as her favorite cities in the world, and she often goes to Europe on holidays.

She also has a devotion to the Blessed Virgin Mary, that’s why she has been going on annual pilgrimages to Lourdes since 1990. Christmas is always spent in Sydney.

“I guess we are now at that point in our lives where we have more time for ourselves. It’s either they have retired from work, are widows, or all their children have grown up,” she says. “I’ve actually become closer to my classmates from Assumption from 50 years ago.”

Indeed, if there is any way to describe Susie Madrigal Bayot’s life now, it is that she is at peace. She is finally home.